North Carolina’s largest pension plan, the Teachers’ and State Employees’ Retirement System (TSERS), is one of the best-funded plans in the country boasting a nearly 90 percent funded ratio, but even some of the better-funded pension systems are showing signs of trouble. While TSERS enjoys funding above the national average, the system’s unfunded liabilities have grown significantly over the past two decades. This policy study, by the Pension Integrity Project at Reason Foundation and the John Locke Foundation, takes an in-depth look into North Carolina’s pension system, identifying the primary causes of the current $9.6 billion in unfunded liabilities, risks facing the system and potential solutions to ensure the long-term retirement security of their members.

The Impacts of Proposed Changes to Georgia’s Teacher Retirement System

This legislative session the Georgia legislature has been evaluating two major reforms proposed for the state’s underfunded Teachers Retirement System (TRS). The first, House Bill 662, would lower the retirement system’s assumed rate of return, while the second, House Bill 667, would accelerate the state’s payment of TRS pension debt by scheduling all additional unfunded liabilities to be paid within 15 years instead of the current 30-year plan. In this analysis, Reason’s Jen Sidorova and Leonard Gilroy use actuarial forecasts to evaluate the fiscal impact of these proposed changes. They find that both reforms would result in a more stable future for TRS, with more predictable contributions and a higher chance of reaching full funding. However, absent additional reforms that are designed to improve solvency, the proposed reforms will likely be diminished by the continued accumulation of unfunded—but earned and legally protected—benefits.

In addition to the major contribution rate changes recently enacted in Senate Bill 72, New Mexico legislators considered, but did not enact, legislation that would have restructured the state’s Public Employees Retirement Association (PERA) pension governing board via Senate Bill 201. The reform would have reduced the overall size of the board and improved the representational balance between the pension system’s various stakeholders. In this commentary, Reason’s Anil Niraula, Steven Gassenberger and Leonard Gilroy evaluate the proposal and explain why a new board structure could improve the overall financial expertise and stakeholder representation of the governing body.

Managers of the Ohio Public Employees Retirement System (OPERS) are considering a temporary freeze on cost-of-living adjustments as a way to reduce costs and slow the growth of the $24.4 billion shortfall in funding needed to pay for promised pension benefits. OPERS has yet to release a report on the fiscal impact of such a freeze, but the savings are not expected to be a complete fix to the state’s underfunding struggles. In this commentary, Reason’s Marc Joffe and Anil Niraula detail the likely fiscal impacts of the proposed change and examine why OPERS’ shortfalls, as given in official reports, are likely understated due to overly optimistic investment return assumptions. As a result, the state likely needs much more comprehensive reforms if it wants to resolve its growing pension-related challenges.

When Governments Go Insolvent, Should Others Absorb Their Retirement Plans’ Costs and Risks?

A San Francisco ballot measure, on the city’s March 3 ballot, asks voters if the city can absorb the retirement plans and promises of an insolvent housing authority. If passed, the city would take on the responsibility of funding retirement promises that were made and guaranteed by the now-nonexistent government authority. Reason’s Marc Joffe notes that while the actual impact of this decision is likely relatively minor due to the small number of pension accounts being transferred, the issue does raise important questions about the fairness of larger government —and taxpayers— taking on the pension obligations of struggling smaller government entities.

Calm Amid the Chaos: Wisconsin’s Pension System and the 2008 Financial Crisis:
The 2008 financial crisis had a detrimental effect on the funded levels of many state and local pension plans. Many public pension plans were forced to initiate reforms in order to recover from the impact of the financial crisis and recession. Anthony Randazzo and Scott Alexander of the Equable Institute have written a paper examining the steps Wisconsin took in order to reach full funding. They detail how Wisconsin implemented a number of important reforms, such as mandatory funding, to fully meet actuarial standards, as well as structuring the board in ways that help insulate it from politics. The paper can be found here.

An Introduction to Police and Fire Pensions:
Local governments are generally held responsible for providing police and fire-fighting services. However, the fiscal stress of hiring personnel has risen due to the growing price of providing public retirement plans. Jean-Pierre Aubrey and Kevin Wandrei of the Center for Retirement Research at Boston College have released their latest brief on providing for retirements for these workers. They find that while public safety retirement plans are more costly than other workers due to early retirements, the plans are generally significantly smaller than general employee plans and do not make up a majority of local government spending. The brief can be found here.

The Pension Debt Levels of Illinois’ State and Local Governments:
The Illinois state government, and local governments across the state, are not contributing enough to their pension plans, according to a white paper by the Institute for Illinois Public Finance. The author, Kenneth Kriz, director of the institute, concludes “current contributions are insufficient to pay off their unfunded liability debt in the timeframe that Illinois law requires.” He also argues that the assumptions built into the actuarial analyses are overly optimistic. The white paper can be found here.

“A stable and solvent PERA matters to all New Mexico taxpayers. We must make changes now – the alternative is to saddle New Mexicans with unacceptable risk. I want to thank senators of both parties for recognizing the essential nature of this reform and the shared sacrifice required to ensure New Mexico’s pension plan remains the finest in the country.”

“People are living longer and working longer and the minimum retirement age was set decades ago. The biggest recruiting issue for state employees I hear is pay, not benefits. Lowering the cost of the pension system will lower contribution rates for both taxpayers and employees, raising take-home pay.”

Each month we feature a pension-related chart or infographic of interest. This week we looked at the aggregate funded ratio and employer contribution for teacher pension plans across the country. 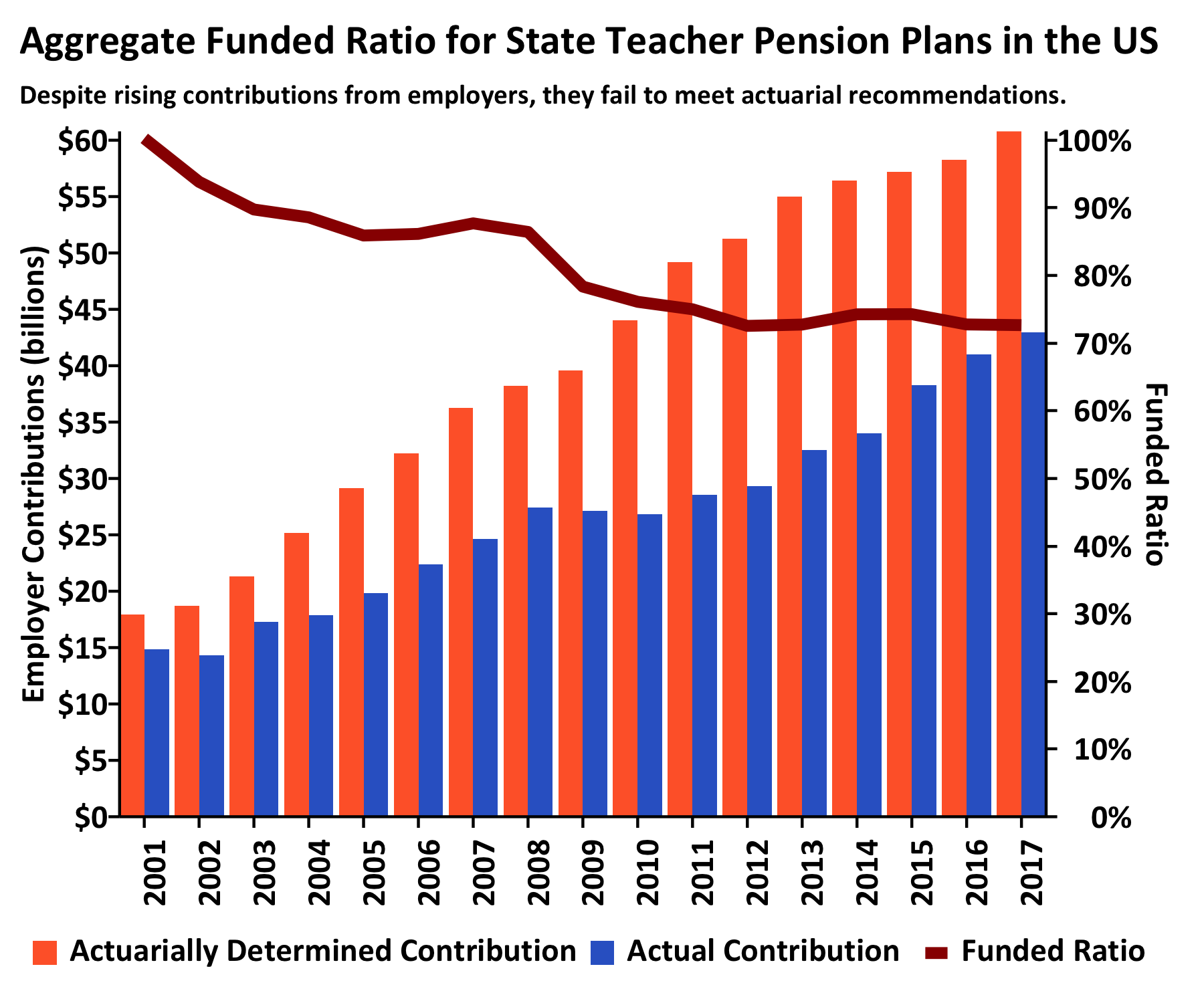