One of the options they are pursuing in 2020—a two-year freeze in annual three percent cost-of-living adjustments (COLAs)—was approved by the OPERS governing board last year, but will require legislative approval. While the temporary pause in automatic benefit increases would be a sacrifice for retirees, the move could nonetheless help slow the growth in unfunded pension liabilities and the related costs of servicing OPERS pension debt, which sits at a historic high. Still, additional changes to the plan’s funding and amortization policies will likely be required to help OPERS completely eliminate its pension debt and secure its pension promises.

OPERS has accrued unfunded actuarial liabilities (UAL) for almost two decades (see graph below), and the rising cost of servicing that pension debt is borne entirely by employers. 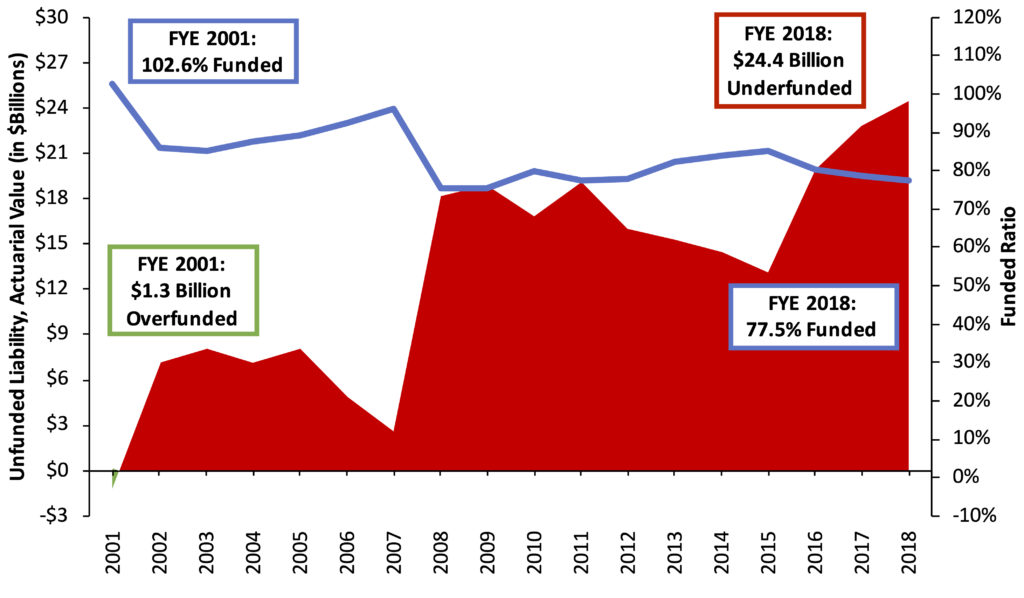 The mounting pension costs already incentivized OPERS pension trustees to consider reforming COLAs once before. In 2017, OPERS advocated for House Bill 413, which would have set the COLA to the annual increase in the Consumer Price Index (CPI) with a cap of 2.5 percent. It would have also delayed adjustments for more recent retirees while granting a one-time increase for older retirees who suffered purchasing power losses in the past when COLAs did not keep up with CPI increases. The legislation also included a trigger which would have increased COLAs if and when the system achieves full funding.

Although a legislative analysis and fiscal note did not estimate the impact of HB 413 on OPERS unfunded liabilities, OPERS calculated the savings from the changes would have been approximately $4 billion. However, the bill did not advance through the House Aging and Long Term Care Committee and died at the end of the 2017-2018 session.

This time around the pension board aims at much simpler changes. The current proposal would keep annual COLAs at three percent but skip increases in 2022 and 2023. It would also delay COLA eligibility for new retirees by two years. Per pension board minutes, the change (designated as “Package 3”) would reduce OPERS’ pension costs by $3.44 billion—equivalent to 14 percent of the total 2018 UAL.

Unfortunately, the actual impact on pension costs will likely be lower than these estimates suggest. Due to a few actuarial policies, the official unfunded actuarial liabilities total could be fairly understated. The reported figure of $24.4 billion is calculated using classical actuarial standards which for OPERS relies on the use of an actuarial value of assets smoothed out over four years. This process is known as asset smoothing and often leads to overvaluing of assets. Under the newest Government Accounting Standards Bureau (GASB) standards, OPERS assets are shown at market value with no smoothing of previous years. The 2018 funding gap based on GASB standards was $27.3 billion, which reflects the system’s financial status in market value terms as of Dec. 31, 2018.

But even the $27.3 billion figure is arguably too low. That is because the plan is using an optimistic 7.2 percent investment return assumption to discount its pension liabilities. Although OPERS judiciously reduced this expected investment growth rate from eight percent earlier in the decade, many financial experts consider 7.2 percent to be too high in this low-interest-rate environment. For example, investment advisors surveyed by Horizon Actuarial Services last year forecast, on average, a 10-year return of 6.11 percent on a hypothetical multi-employer pension plan.

This issue has already proven to be a problem for OPERS. Per the Reason Foundation Pension Integrity Project’s analysis, the top culprit in the growth of unfunded OPERS pension liabilities from 2001 to 2018 was investment return performance coming in below the assumed rate of return, accounting for $12 billion in reported pension debt.

If the fund is expected to achieve returns on its assets at a rate lower than 7.2 percent, as many experts would posit, even more pension debt would likely emerge. If OPERS uses a 6.2 percent investment return assumption instead of 7.2 percent to discount its liabilities, the system’s reported unfunded pension liability would be closer to $40.4 billion, instead of $27.3 billion. See graph below. 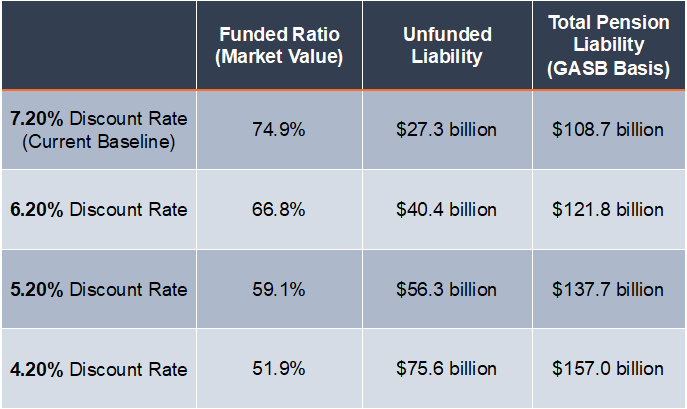 If, in fact, OPERS’ unfunded liability is that high, the proposed COLA freeze would be equivalent to less than 10 percent of the system’s red ink and would thus need to be followed by additional actions to be most impactful. Other options available to OPERS and the state legislature include increasing employer and employee contributions, as well as creating more portable and lower risk plan design options for new hires, such as hybrid plans, cash balance plans, and defined contribution retirement plans.

Ohio policymakers need to address the challenges that are holding OPERS back from keeping its promises in full. These fixes will hopefully be part of the additional, and more comprehensive and significant pension reforms needed in the coming years. Otherwise, the state’s current plan for pension reform will likely fall short of its goal of maintaining a secure retirement option for Ohio’s workers.