Recently introduced legislation (Senate Bill 201)—separate from New Mexico Gov. Michelle Lujan Grisham’s wider Public Employees Retirement Association (PERA) reform efforts that are included in Senate Bill 72—would reconfigure the governing board of the state’s largest public pension system, the Public Employees Retirement Association, in a way that would allow for a wider range of stakeholder representation and boost financial literacy and fiduciary experience among members. By design, this proposed change is a step towards more efficient decision-making and improved pension governance.

PERA is currently governed by a 12-member Board of Trustees. Ten members are either active or retired state or local employees and almost all are elected by PERA members. New Mexico’s secretary of state and state treasurer also serve as ex officio members but participate little in the daily management of the PERA system.

The proposed bill would reduce the number of trustees from 12 to nine, while also reducing the share of trustees elected by plan participants—and would require reconstituting the board with new appointees upon passage.

While the current composition ensures that active employee and retiree interests are well represented on the board, the current governing structure may not provide the overall stakeholder balance nor the financial and technical skills generally expected of fiduciaries managing over $15 billion in assets and a $6 billion debt owed to public employees.

In fact, according to the Hoover Institution, having a large number of member-elected trustees on the pension board is proven to have a strong negative correlation to a plan’s investment performance. The report finds:

Similarly, the Center for Retirement Research at Boston College found a positive relationship between the best board composition practices (e.g., having a single fiduciary board, no more than 70 percent active and retired members, at least two members with actuarial or financial expertise, and more) and plans’ 10-year investment returns.

A 2017 study by three prominent academics found that alternative investments (e.g., private equity, hedge funds, real estate, etc.) by public pension plans tend to consistently underperform if their boards of trustees are dominated either by state officials or by trustees elected by plan participants.

As such, the characteristics of pension boards—meaning their structure, composition, experience, size, and tenure—matter. Having financial expertise balanced with broad stakeholder/retiree representation involved in the decision-making process contributes to better board performance, at least in the crucial metric of investment returns.

If passed, the PERA board would be reconstituted with new members, and all newly appointed board trustees would be required to “have skill, knowledge, and experience in financial matters.”

The reconstituted PERA Board of Trustees would consist of:·

By increasing the financial expertise on PERA’s governing board and expanding the non-member share of board representation, the proposed legislation offers the promise of improving the experience and oversight capabilities of PERA’s governing board, which in turn is likely to result in improved plan solvency over time.

There would likely be an infusion of fresh perspectives on the board to inform many of the financially pressing topics that will inevitably come before them. And the boost in financial and investment acumen among trustees is expected to improve their ability to navigate complex pension funding challenges, thereby helping keep PERA on course to full funding.

Below we present a breakdown of how well the proposed PERA reform meets the Pension Integrity Project’s reform objectives: 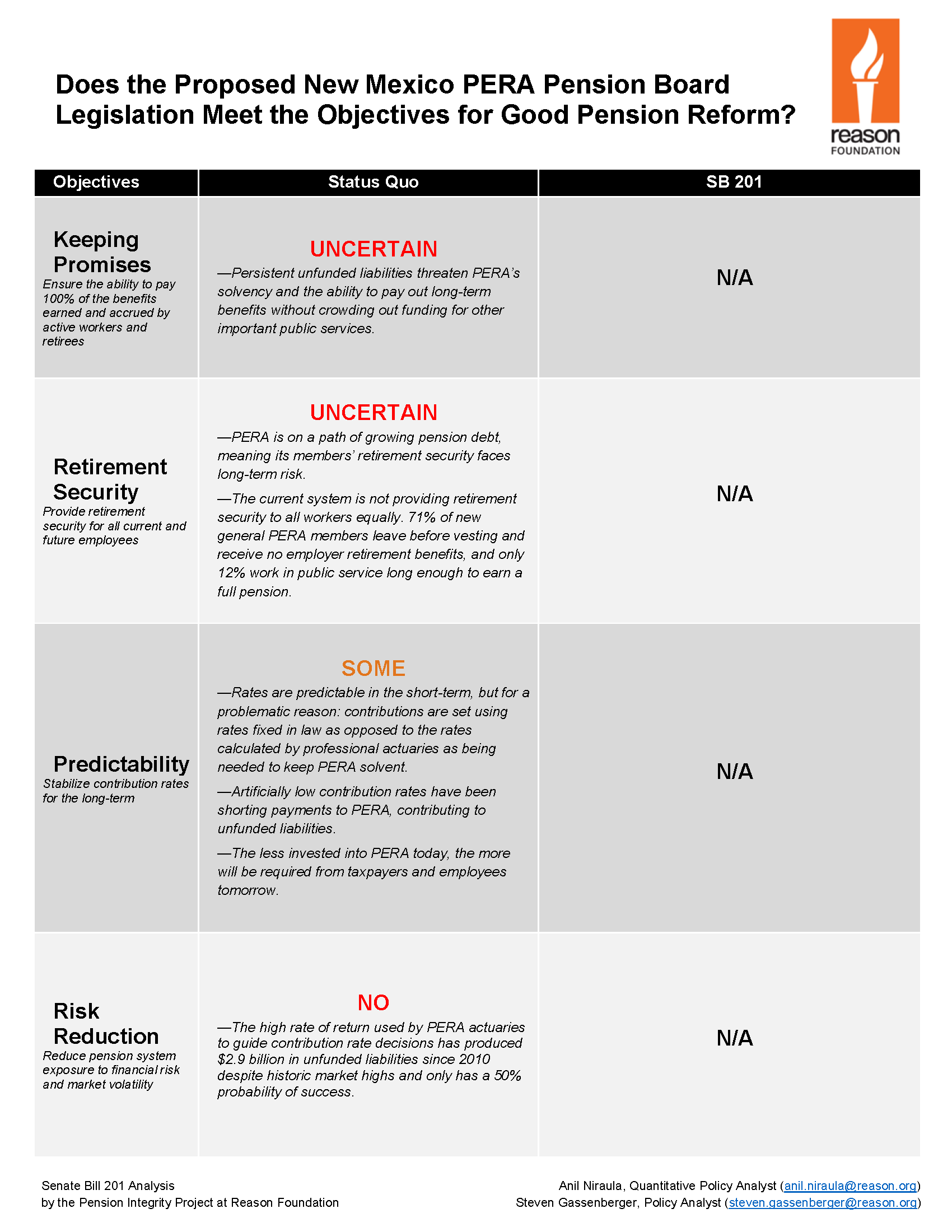 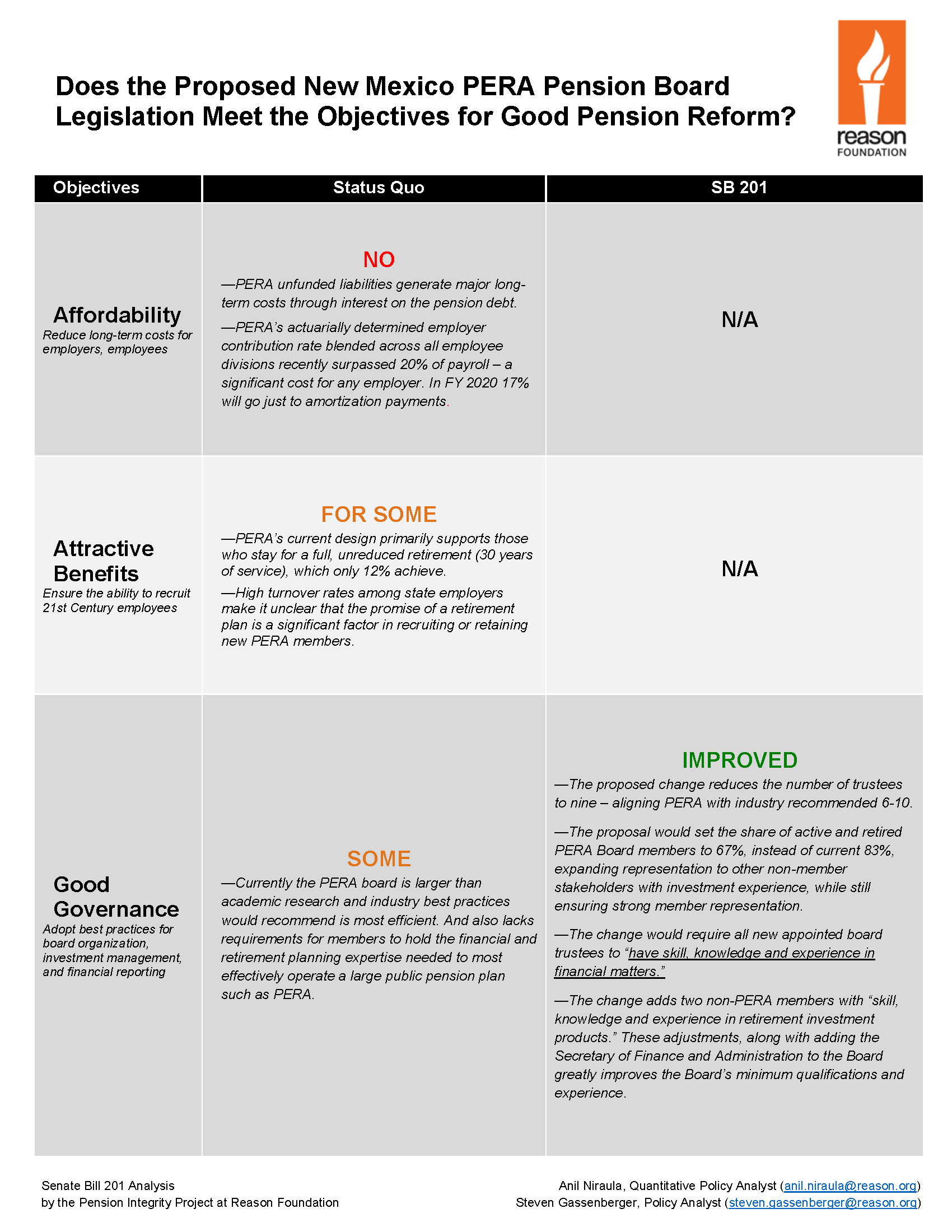 Does the Proposed New Mexico PERA Pension Board Legislation Meet the Objectives for Good Pension Reform?