The Potential Risks and Rewards of CalPERS’ New Investment Policy

The California Public Employees Retirement System (CalPERS) recently announced its strategy to increase the solvency of the plan, which currently sits at just 71 percent funded. The new approach, labeled “More and Better Assets,” embraces a new two-pronged investment strategy that combines a push towards higher earnings and riskier assets, with the ability to leverage the fund to retain liquidity when market opportunities present themselves and borrowing costs are low. As Reason Foundation’s Ryan Frost and Leonard Gilroy note, the strategy means that the plan will be taking on higher levels of investment risk, but Ben Meng—CIO of CalPERS—indicates that it will increase the probability of hitting the system’s assumed 7 percent return rate from 39 percent to 45 percent.

The New Mexico Public Employees Retirement Association (PERA) has amassed over $6 billion in unfunded pension liabilities over the past two decades, but recent reforms placed the pension plan on a better path toward debt elimination and full funding. Earlier this year, state lawmakers and the governor prudently addressed a number of PERA’s problems with significant reforms to contributions and benefits. The changes could generate $700 million in long-term savings and improve the probability of reaching full funding by the year 2043 from 38 percent to 47 percent. This in-depth analysis looks at the primary factors driving PERA’s unfunded liabilities over the past few decades, the benefits of the 2020 pension reform law, and provides stress testing analysis designed to highlight ongoing financial risks and remaining opportunities to improve the plan.

Only 15 states will revoke or garnish a police officer’s pension benefit if the officer is convicted of serious crimes or misconduct. While the effectiveness of pension garnishment and forfeiture laws is difficult to quantify, allowing courts the ability to modify public employee benefits may be important in attempts to prevent further taxpayer dollars from going to public employees who have abused and disgraced their positions. Reason’s Ryan Frost offers a snapshot of pension garnishment and forfeiture policies across the nation and reflects upon what this could imply for broader government and police reforms.

While CalPERS has a target assumed rate of return of 7 percent today, it was once as low as 2.5 percent. Throughout the history of the public pension administration, investment expectations and strategies have evolved in response to shifting market landscapes. In a new commentary on these trends, Reason’s Marc Joffe explores the history of the nation’s largest public pension plan, finding that investments were relatively low-risk for much of the history of CalPERS. Since the early 1990s, however, the system’s assumed rate of return has consistently been above risk-free rates.

Public Pension Systems Need to Revisit and Clarify Their Objectives

When examining the effectiveness of public pension plans, dialogue often focuses on metrics such as contribution rates or funded ratios. But any evaluation of a public pension plan’s effectiveness should also consider the larger principles and objectives that the system has adopted, such as affordability for taxpayers and providing a secure and portable retirement income for retirees. Pension Integrity Project Senior Fellow Richard Hiller writes about the need for policymakers to revisit goals associated with employee outcomes, workplace recruiting and retention needs, and taxpayers’ costs so they can more accurately structure pension plans to meet their overarching purposes.

How Exposed Are Retirement Savings to Market Risk?

During the stock market volatility earlier this year, nationwide retirement assets fell by $14.2 trillion dollars. While the market has largely recovered those losses since, this year’s market movement highlights some of the challenges in managing secure and predictable retirement benefits in an unpredictable world. In a new brief, Anqi Chen and Nilufer Gok at the Center for Retirement Research analyze the impact of the pandemic-related recession, discuss the importance of protecting worker retirements from market turmoil and the need for plans that manage and share risk between employees and employers. The brief can be found here.

An Update on Teacher Salaries Versus Benefits

While average teacher salaries in the U.S. rose by 19.3 percent from 2010 to 2020, the average cost of teacher retirement plans soared by 126.45 percent, concludes a new analysis by Chad Aldeman of TeacherPensions.org. Overall teacher compensation rose by 28.5 percent over the same time period. These findings suggest that pension contributions are taking up a growing share of education-related budgets and pension costs for retired employees is hindering the ability to improve current teacher compensation. Aldeman warns that without further reforms, growing pension costs will take a larger proportion of school district budgets in the future. The analysis can be found here.

“Employers and employees will likely face higher payroll contribution rates in years ahead, but the pandemic recession itself is only modestly amplifying that trend. What the recession is provoking, however, is a near-term issue of whether public employers will yield to a temptation to put off actuarially required contributions to their pension funds.”
—Girard Miller, finance columnist, writing in “Public Pensions and the COVID-19 Fiscal Dilemma,” Governing, July 7, 2020

“Today’s Supreme Court decision will ensure that the unsustainably generous pensions that were doled out in the past will continue to be an albatross over our city for decades to come. This decision will force the city to make very difficult decisions about how to pay for ballooning pension payments at the risk of short-changing critical needs like public education, social services and infrastructure investments.”
— Jorge Elorza, mayor of Providence, quoted in “R.I. Supreme Court Deals a Huge Blow to Providence in Pension Case,” Boston Globe, June 30, 2020

Each month we feature a pension-related chart or infographic curated by one of our Pension Integrity Project analysts. This month, Marc Joffe displays the long history of assumed rates of return for CalPERS compared to 10-year U.S. Treasury rates, showing the assumed rates have been slow to adjust downward with market changes in recent decades. Find the data visualization and more detail here. 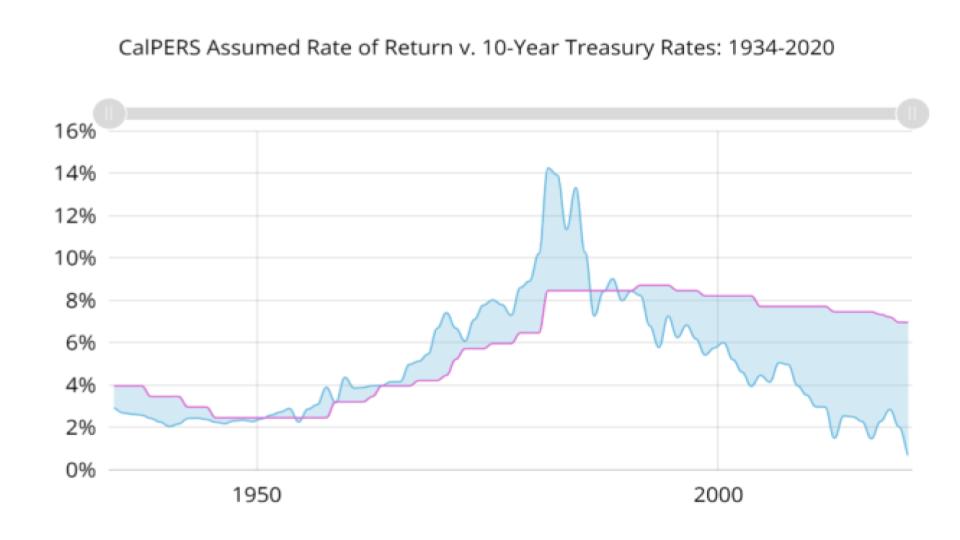