The legislation largely codified into law a set of recommendations made by Gov. Lujan Grisham’s Pension Solvency Task Force last fall. The reform was backed by PERA’s Board of Trustees and administration, who—commendably, in our estimation—took their fiduciary responsibilities seriously and offered a strong case for reform in the interest of improving PERA’s solvency and reducing long-term taxpayer financial risks and costs.

In the wake of the Solvency Task Force’s report, and throughout the 2020 legislative session, the Pension Integrity Project at Reason Foundation provided actuarial and policy analysis to legislators and an array of other stakeholders.

While we believe that additional reforms—primarily shifting away from legislatively-set PERA contribution rates, paying down pension debt faster, improving actuarial assumptions, and expanding plan design options to expand choice—will still be needed in additional phases of reform to ensure long-term solvency, Senate Bill 72 was an important step in the right direction for New Mexico, both from a pension finance and bipartisan consensus-building perspective.

“We are avoiding the cliff if we do this,” Sen. George Muñoz told his Senate colleagues prior to the vote on SB 72. “At the end of the day, this fund has to be solvent.”

Indeed, PERA currently holds $6.7 billion in unfunded pension liabilities, most of which have materialized in the decade following the 2008 financial crisis (see Figure 1). 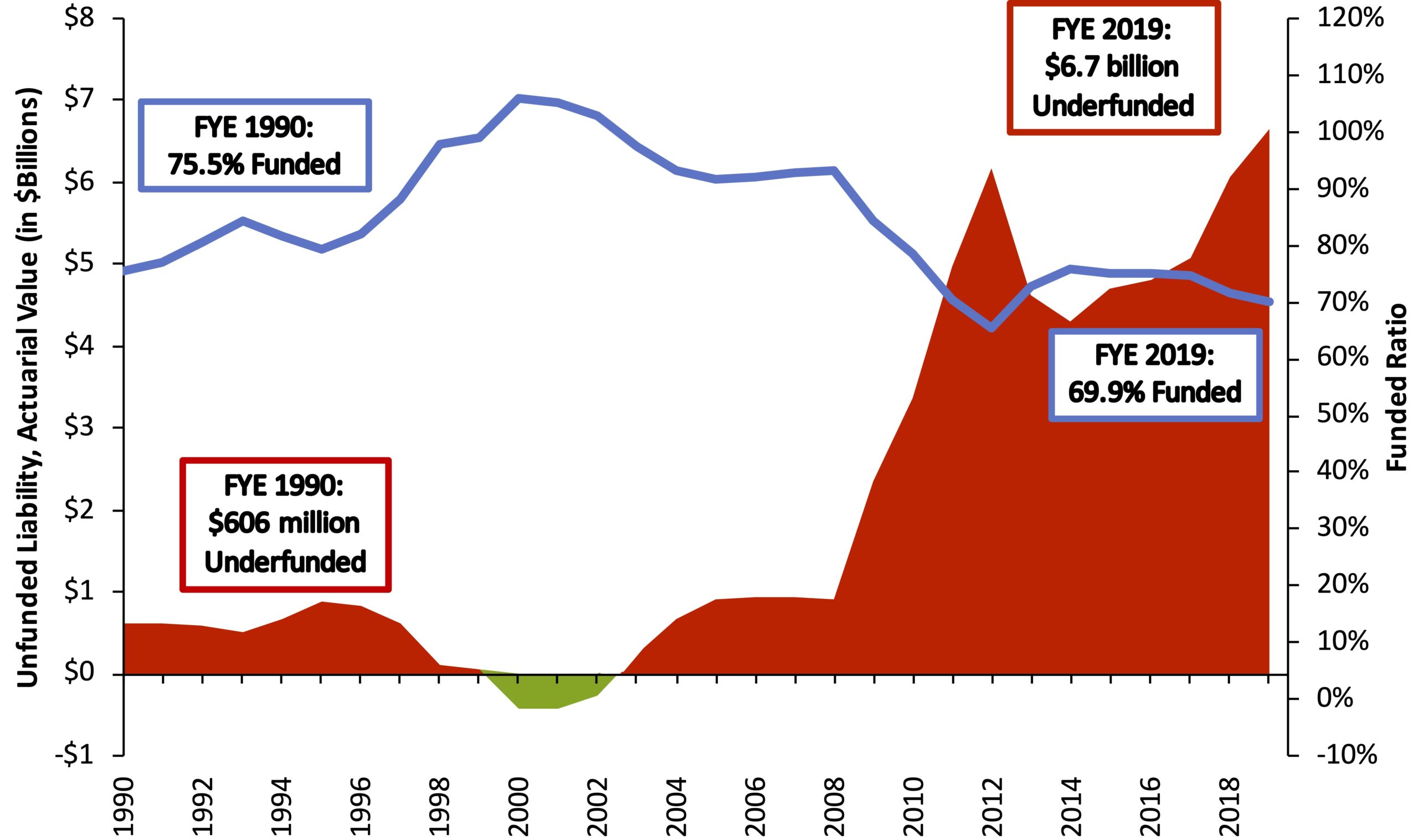 As the Pension Integrity Project described in a September 2019 report, investment shortfalls, negative amortization and changes to actuarial assumptions have been the primary drivers of PERA’s unfunded liabilities over the past decade (Figure 2). 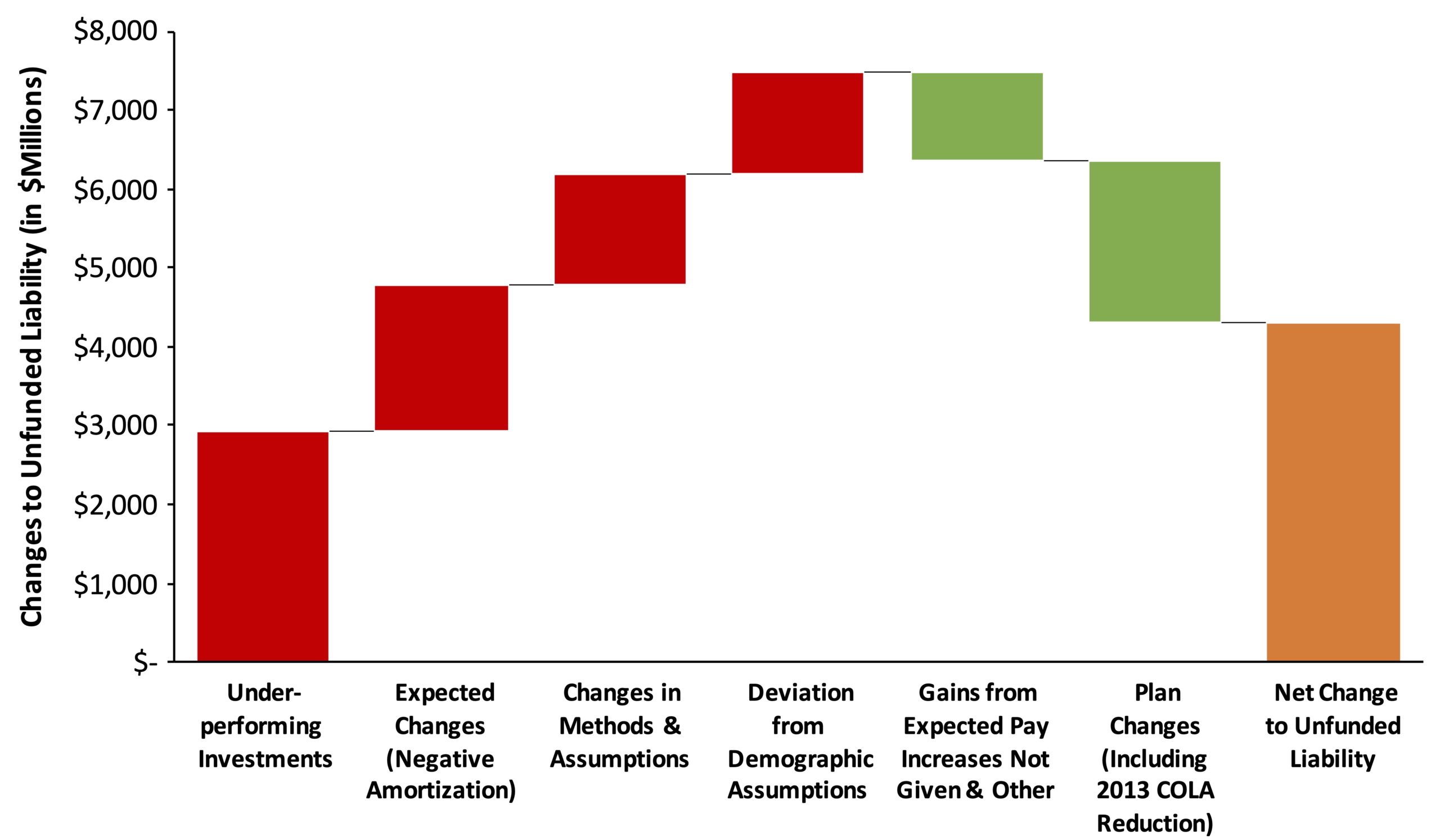 As one indicator of the challenges facing PERA administrators and trustees, even though in 2019 the S&P 500 index—a composite index capturing the 500 largest U.S. publicly traded companies—reached an all-time high (see Figure 3), PERA’s funded status continued its steady decline. 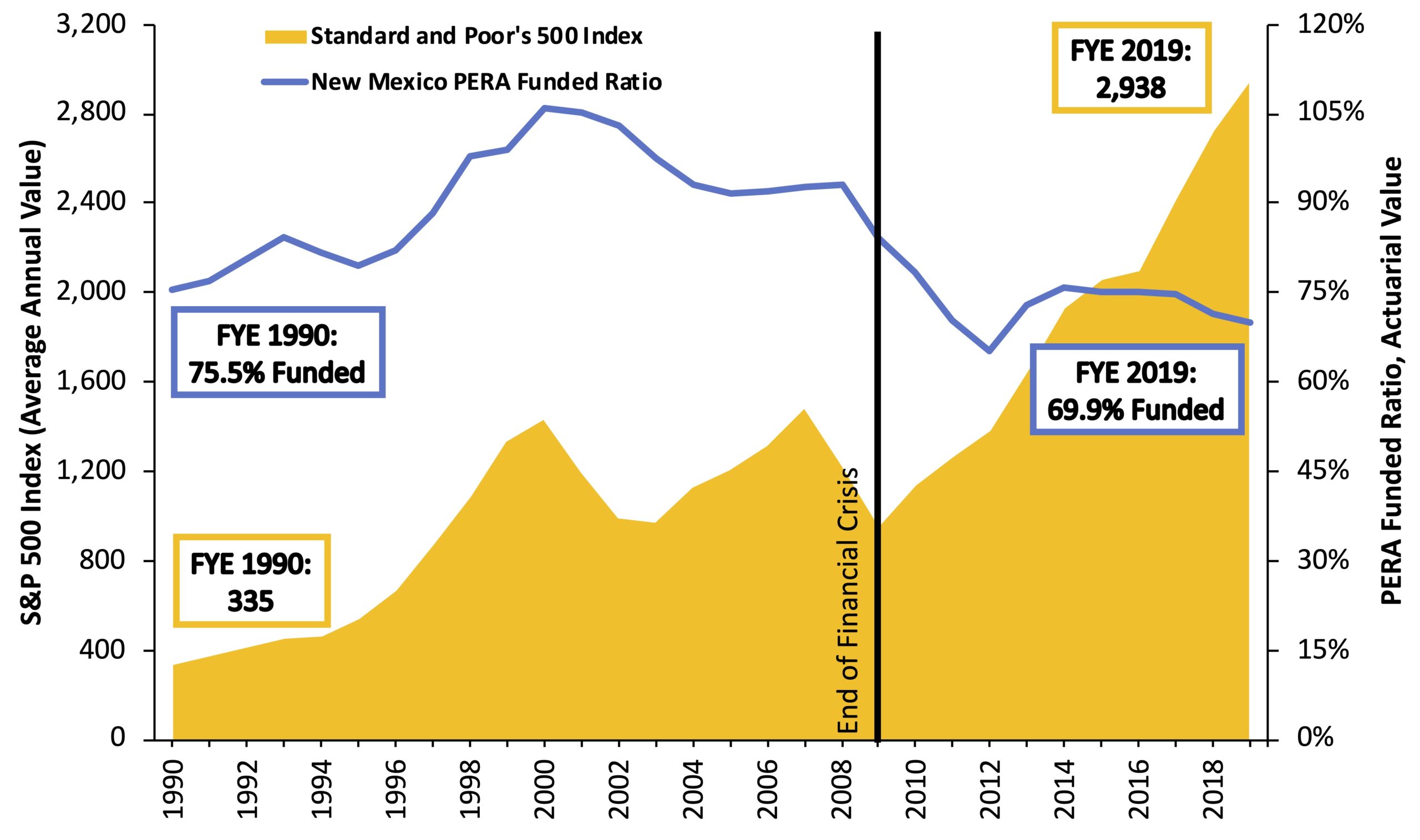 Though PERA’s investment returns averaged 9.2 percent over the past 10 years, the average return falls to 5.9 percent when extended back 20 years. Worse, pension coffers became so depleted in the aftermath of the 2008 financial crisis that they failed to produce consistent material asset gains during the proceeding record-setting bull market. Put simply, PERA experienced a lost decade of investment gains during a market boom, making reducing unfunded pension liabilities and growing pension assets in absolute terms very difficult.

To their credit, PERA administrators responded to the new normal low-yield investment economy by lowering the assumed rate of return from 8 percent to 7.25 percent in 2010, uncovering hundreds of millions in previously unrecognized (on an accounting basis) unfunded pension promises. Yet, using a range of industry-standard capital market assumptions, a Pension Integrity Project analysis of PERA’s investment portfolio suggests that PERA has between a 12 percent and 47 percent probability of consistently meeting its 7.25 percent investment return expectation in the next 10-to-20 years.

Another major challenge is that for years PERA has been systematically underfunded due to a flawed funding policy whereby the state legislature establishes employer contribution rates in statute. The results have been the consistent failure to appropriate 100 percent of the actuarially determined employer contributions (ADEC) calculated by PERA actuaries each year as being necessary to keep the plan solvent.

Figure 4 shows the divergence between the total ADEC rates and the total annual statutory contribution rates each year since 2010, both in annualized and average terms. 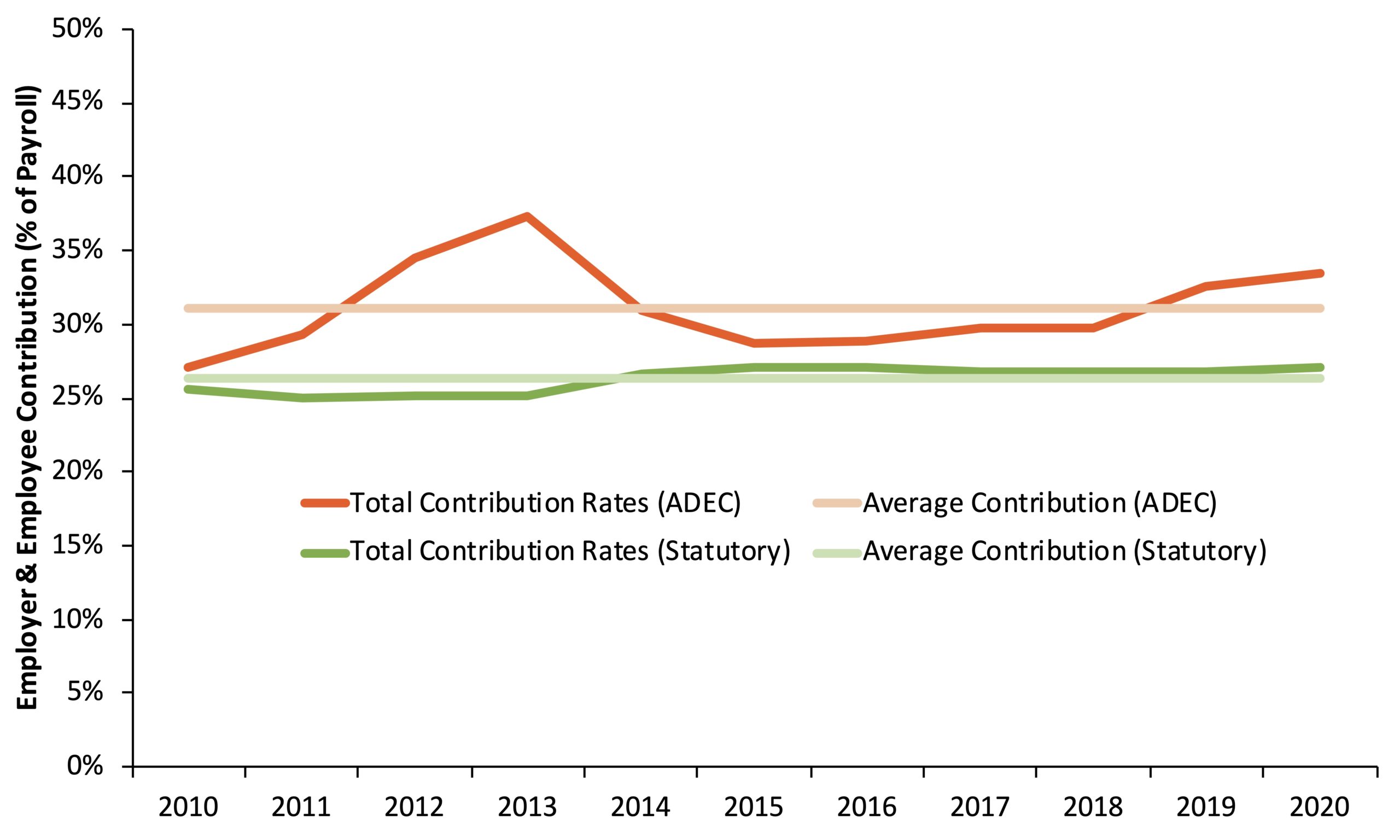 As one example of contribution rate insufficiency, last year’s statutorily set employer and employee contributions for all PERA divisions combined equated to 26.84 percent of total payroll, which fell short of the ADEC rate by as much as 5.73 percent of payroll, or $145 million.

Several provisions were included in SB 72, but the two core reforms that serve as the foundation for long-term solvency were:

By embracing the “shared sacrifice” approach between employees and taxpayers in terms of equal contribution rate increases, along with adopting a prudent benefit adjustment mechanism designed to not pay out automatic, fixed-rate benefit increases at a time when the plan is declining in solvency, SB 72 represents a smart and collaborative balancing of interests between taxpayers, public employees and current retirees.

“Will there be a little sacrifice from everybody? Sure […] But the sacrifice we make now will pale in comparison if we wait,” PERA executive director Wayne Propst recently told the Santa Fe New Mexican.

To make the adjustments easier for those most affected by the transition, Senate Bill 72:

Regarding the transition from a fixed-rated COLA to a profit-sharing model, under SB 72 the new COLA would only exceed the minimum 0.5 percent annual increase if smoothed asset returns exceeded a “COLA hurdle rate” to be set by PERA’s actuaries. The 3 percent COLA cap instituted by the new reforms would rise to 5 percent if PERA were to reach full funding.

Analyzing the Effects of SB 72 on PERA’s Pension Solvency

PERA administrators expect the passage of SB 72 to generate $700 million in long-term savings and eliminate all unfunded liabilities over the next 25 years if all assumptions are met. According to the latest projections published by PERA actuaries during the legislative process, the new reforms will improve PERA’s probability of reaching full funding by 2043 from 38 percent to 47 percent. 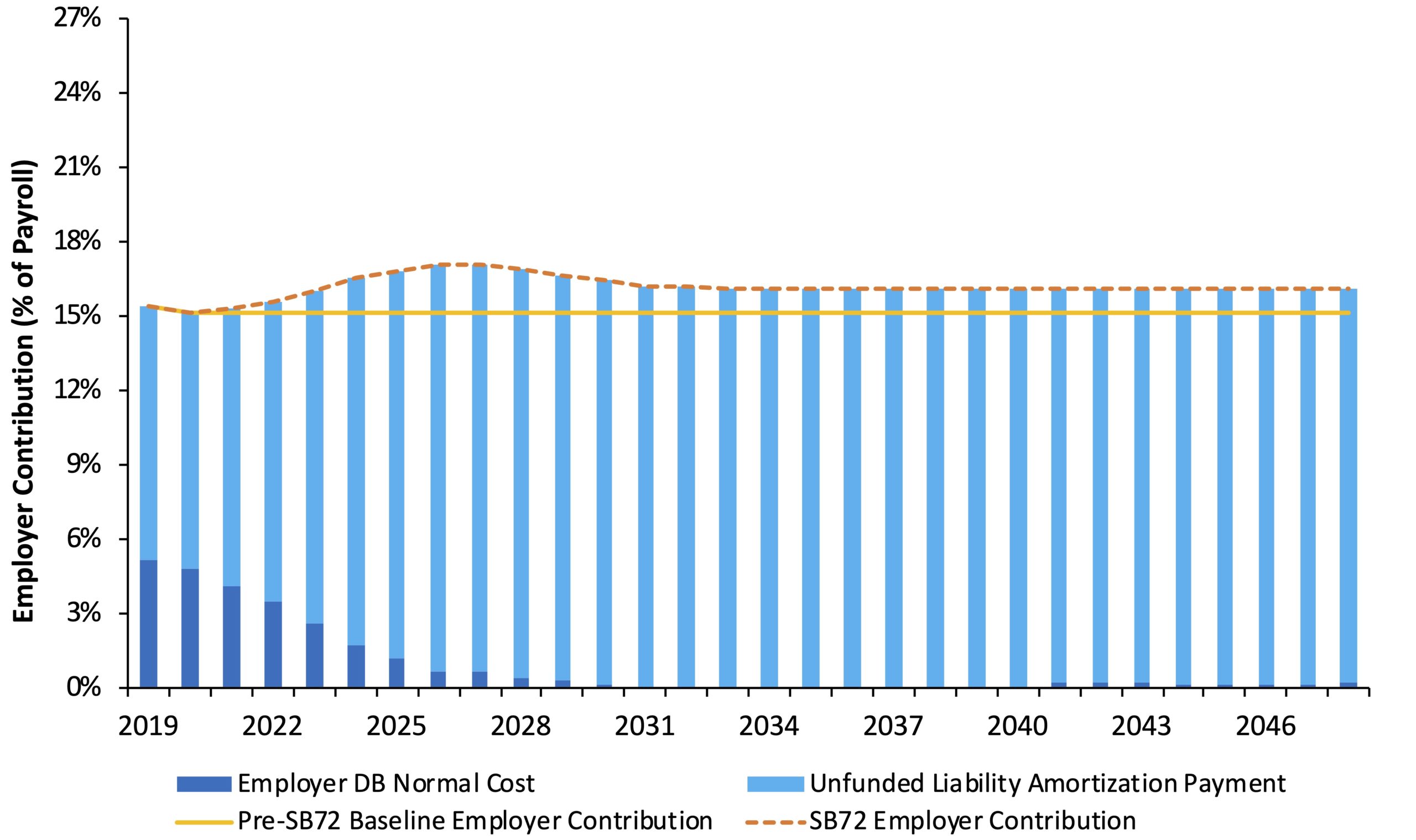 Figure 6 examines how SB 72 will eliminate—or at least significantly contain—PERA’s unfunded liabilities over the next 30 years, especially in the event of sustained investment underperformance. Absent SB 72, unfunded liabilities would have continued to grow, likely surpassing $12 billion in the next 30 years—more than double the 2019 reported level—which would put much greater stress on both public budgeting priorities and PERA cash flows compared to today.

Figure 6. PERA Unfunded Liability Projections Before and After SB 72 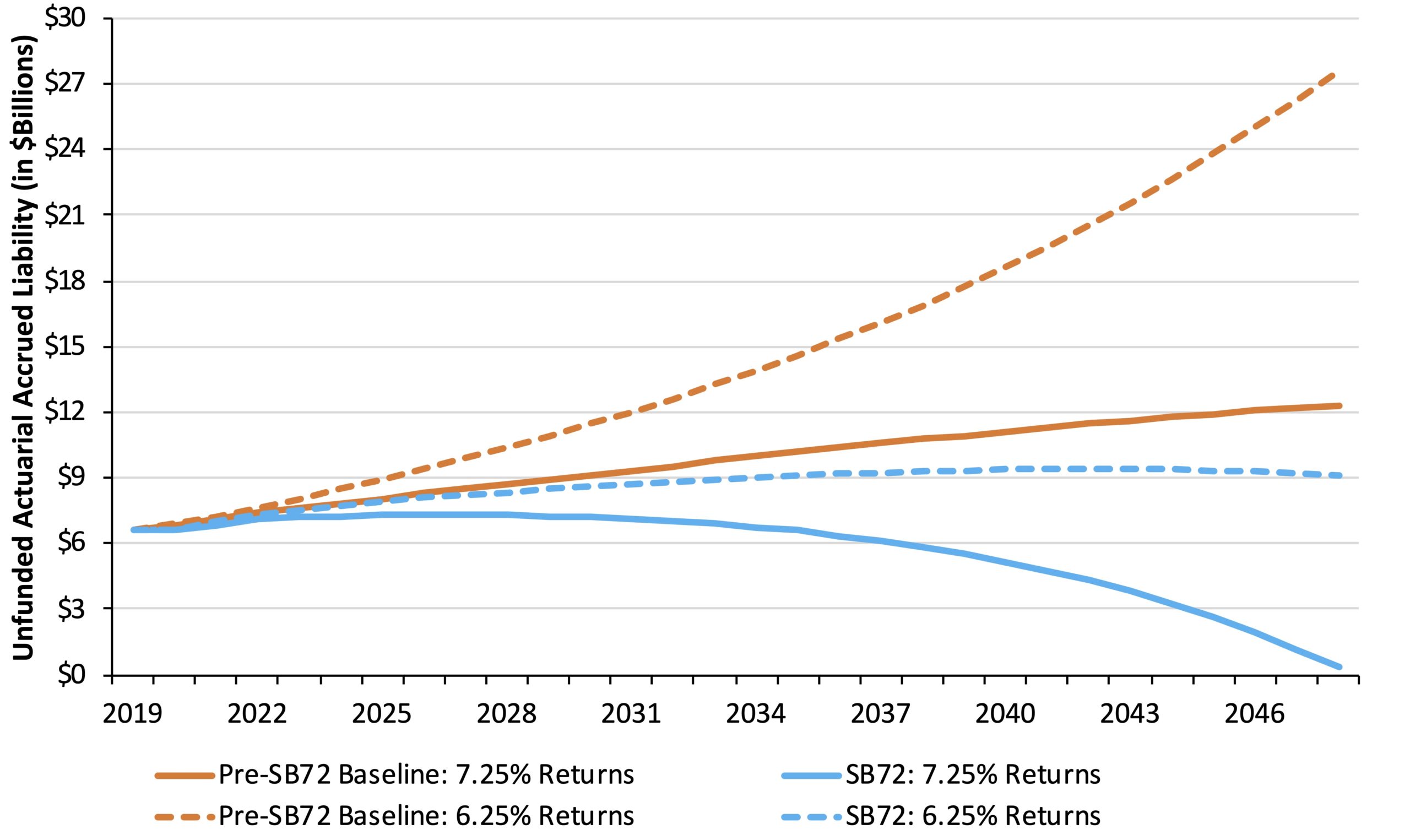 It is apparent from the Pension Integrity Project stress testing analysis shown in Figure 6 that SB 72 makes a major leap in risk reduction. In the event of a 100 basis point underperformance relative to the assumed investment return—in other words, hitting a 6.25 percent average return instead of the assumed 7.25 percent rate over the next 30 years—SB 72 would shield taxpayers from a quadrupling of current unfunded liabilities and avoid over $15 billion in additional unfunded liability.

This risk reduction is important given the less optimistic near-term capital market forecasts. Leading financial advisors that provide forecasts for diversified institutional pension portfolios—for example, Horizon Actuarial Services, LLC, which surveyed over 30 such advisors in 2019—estimate that returns will average around 6 percent over the next decade.

Modernized COLA Designed to Protect Retirees From the Threat of Inflation

The profit-sharing COLA structure included in Senate Bill 72, along with other COLA changes, helps increase the likelihood of PERA achieving full funding in the coming decades. But more importantly, SB 72 offers PERA a more sustainable approach while continuing to provide robust protection against inflation for retirees.

Actuarial modeling by the Pension Integrity Project finds that the new COLA created under SB 72 is likely to produce annual benefit increases in the 1.3 percent to 2.5 percent outcome range over the 2023-to-2049 period (see Table 1).

Notably, we find there is a 50 percent chance the SB 72 COLA for current and future retirees below age 75 would average at least 1.71 percent annually through 2049, on par with the PERA actuary’s latest projection of a 1.61 percent average COLA. The Pension Integrity Project’s modeling suggests a 39 percent probability that the new COLA under SB 72 would meet or exceed the previous fixed 2.0 percent COLA rate over the same period.

Senate Bill 72 was a necessary and crucial first step towards improving the financial health of PERA and ensuring the sustainable delivery of public employee retirement benefits for state and local workers.

More importantly, the bipartisan and labor-supported effort established an important precedent in New Mexico and elsewhere for collaboratively seeking pragmatic solutions on a challenging public finance issue that is often intractable politically and fraught with emotions and fear.

This is important because it is rare that one reform ever “solves” all the challenges facing a typical pension system. In this case, other fundamental changes will still be needed to strengthen PERA against volatile global markets, including paying full actuarially determined contribution rates, adopting more conservative actuarial assumptions, and increasing paths to retirement security for the growing share of the workforce unlikely to work the full 30 years in public service needed to receive an unreduced pension benefit.