As discussed in a recent analysis by Reason Foundation’s Pension Integrity Project and Rio Grande Foundation, these important first steps directly address some of PERA’s most systemic issues by improving funding policy and adopting a more sustainable benefit adjustment mechanism for retirees. Rooted in a belief in “shared sacrifice,” the stakeholder-generated reforms are estimated to eliminate over $6 billion in unfunded liabilities over the next 25 years. Even more importantly, the process created to arrive at the recommendation has established a model for how to collaborate around the shared goal of protecting taxpayers and providing a secure retirement to New Mexico’s public servants, which could prove to be extremely valuable in the coming years.

“Change is never easy when you are faced with serious bond rating concerns, when you are faced with the collapse of a retirement system so many New Mexicans depend on if the economy faces a downturn” said State Sen. George Muñoz, chair of the Investment and Pensions Oversight Committee, referring to the drafted PERA pension proposal. “Everybody has to step up.”

In order to address the charges laid out by Gov. Lujan Grisham’s fifth executive order after being elected overwhelmingly by voters last year, the proposed legislation:

To soften the transition, state police and adult correctional officers would be exempt from contribution increases, while municipal and county workers would benefit from a two-year delay in contribution hikes. Employer contributions would be slated to decrease over time as PERA’s funding status improves over the long-term.

In the transition to a profit-sharing-based COLA, the proposed reform offers a fixed—and temporarily non-compounding—2 percent COLA for three years and decreases the waiting time for retirees to receive the annual increase from seven years to two years.

Retirees over 75, disability retirees, and retirees with 25 years of service who receive less than $25,000 in annual benefits were all exempted from the proposed COLA changes.

The bill’s drafters deviated from the original task force’s proposal by bumping the 2 percent COLA up to 2.5 percent for retirees over the age of 75 and allowing return-to-work employees to receive a COLA going forward.

Overall, these changes would exclude roughly 31 percent of retirees from the proposed COLA reforms, per PERA managers, and would require a $76 million appropriation to fund the three-year, 2 percent fixed COLA—a so-called “13th check”—for all other COLA eligible retirees.

“Reforming our pension system, making sure it remains one of the best in the United States, requires backbone and shared sacrifice,” said Gov. Lujan Grisham upon the introduction of the proposed 2020 legislation. “Left unattended, that shortfall [the multibillion-dollar PERA unfunded liability] will, sooner than later, obligate painful cuts and wreak havoc on future generations of retirees — if we do not come together and act now.”

Effects of the Proposed 2020 PERA Legislation

The state’s $6.7 billion unfunded pension liability (see Figure 1) was explicitly noted as a cause for concern by Moody’s Credit Service in its June credit analysis of New Mexico. 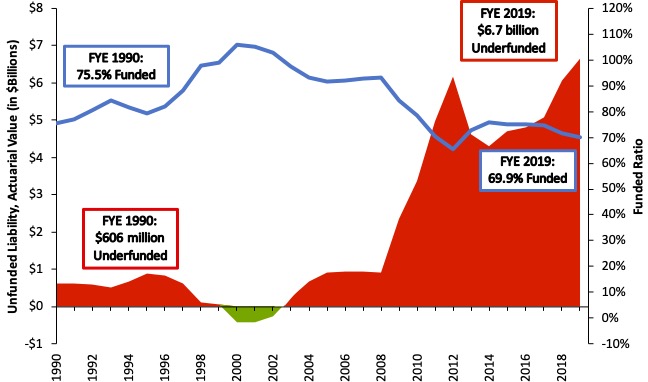 In fiscal year 2019 alone, PERA’s pension debt increased by $600 million due mostly to underperforming investments relative to targets and amortization payments coming up short of covering the interest that accrued on carried pension debt.

The proposed reform bill would infuse the system with a much-needed increase in annual contributions, reducing PERA’s unfunded liability by roughly $700 million immediately upon passage and setting them on a corrected course back to long-term solvency, according to the Solvency Task Force. This would be a welcome development given that in 10 of the past 15 years inadequate statutorily-set employer and employee contributions have starved PERA of the funding plan actuaries estimated would be required to fully fund promised benefits, as shown in Figure 2. 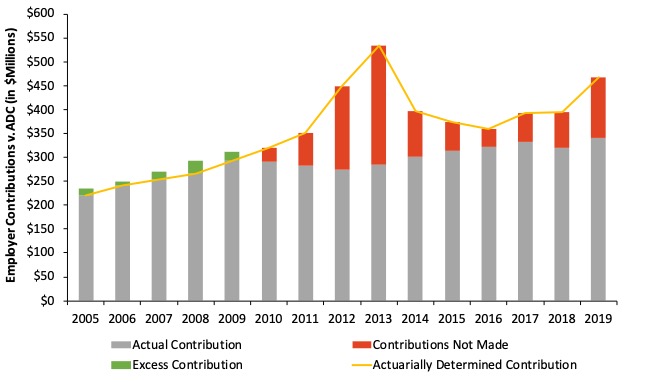 The task force’s recommendation to first shift to a non-compounding COLA and then to a profit-sharing model is intended to regulate the new COLA to be between 0.5 percent and 3 percent each year. Members would receive increases above the minimum equal to certain excess gains multiplied by PERA’s funded status that year. All in all, the proposed shift would result in an estimated 1.64 percent average annual COLA through 2049—compared to the current fixed 2.0 percent annual COLA. This more sustainable cost structure slows the growth in actuarial liabilities and should improve PERA’s funded status. According to PERA’s revised projections (Figure 3), under the proposed legislation the system would have a 47 percent chance of reaching or surpassing the 100 percent funded threshold by 2043. 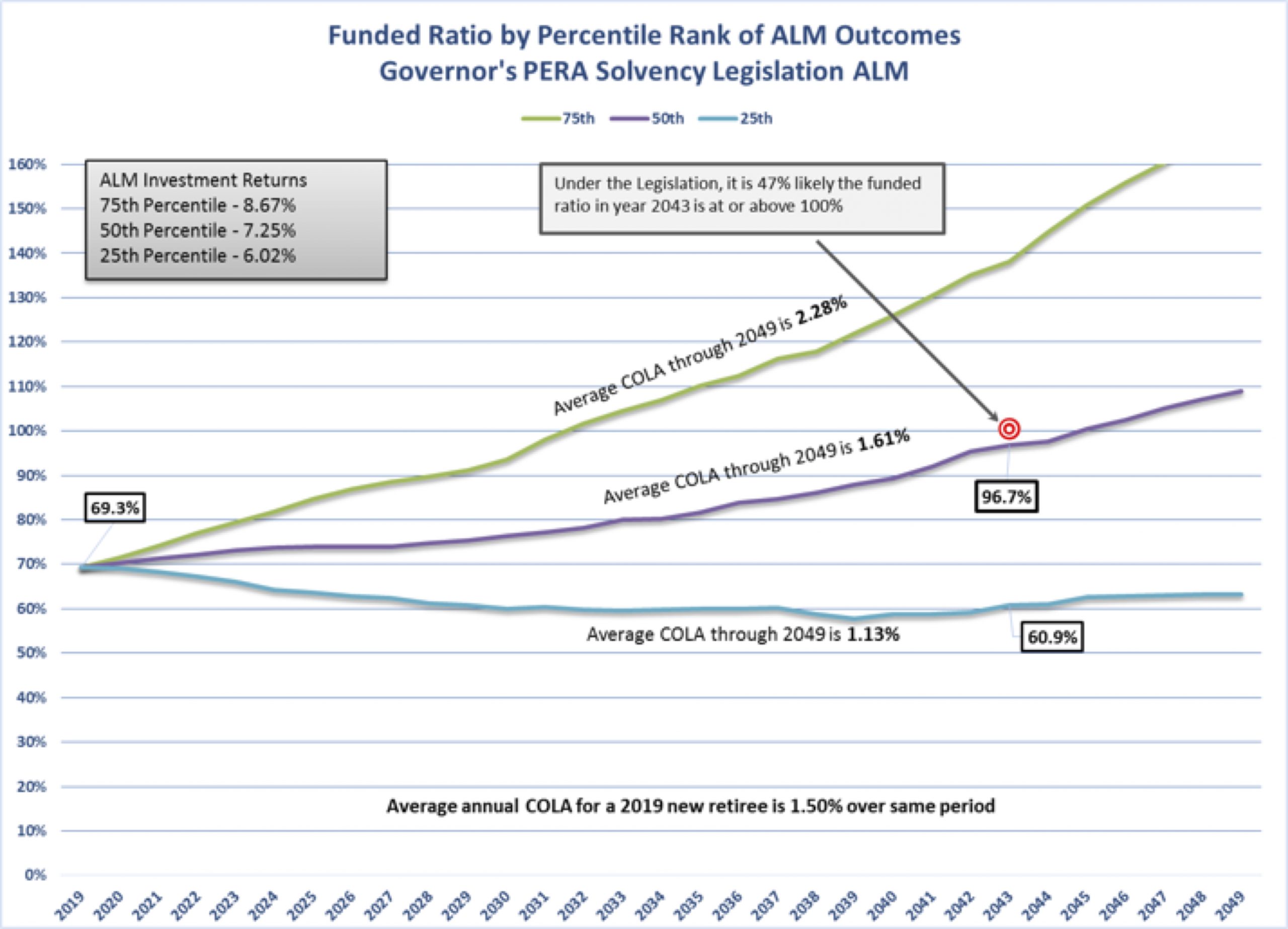 Opportunities to Build on the Proposed PERA Reform

For 2019, the total contribution rate (employee and employer contributions combined for all divisions) set in statute for PERA was 26.84 percent of payroll, a rate 5.73 percent below the level plan actuaries calculated was needed that year to move the plan toward full long-term funding. This corresponds to a difference of roughly $130 million in contributions not made. (Figure 2)

That gap is slated to grow up to 6.27 percent in 2020 and continue its trajectory without additional steps to adopt reforms that directly address the inadequacy of statutory contribution rates relative to actuarially determined employer contribution rates needed for long-term solvency.

Even with the proposed 4 percent increase in contributions across both members and employers, relying on a law—and ultimately elected officials—to determine what pension contributions are made each year incentivizes short-sighted fiscal thinking that predictably leads to underfunding that then becomes exacerbated in volatile or down markets.

With most financial advisors predicting a “new normal” low-yield investment environment for the next 10-to-15 years, PERA may lack the investment revenue it needs to properly grow assets and adequately fund benefit payouts over time.

The Pension Integrity Project’s analysis of PERA’s asset allocation relative to various industry capital market forecasts suggests that hitting a 7.25 percent assumed rate of investment return may be overly optimistic (see Figure 4), at least over the next 10-to-15 years, and forecasts beyond that suggesting a return to historic levels of investment performance and forecasting beyond that near-term window becomes very difficult given increased volatility in market returns.

Moving to adopt or phase-in investment return assumptions below 7 percent—like those recently adopted for major plans in states like Michigan and New York—could help moderate the effects of volatile returns and reduce future turbulence in a low-yield environment. Additionally, moving to an actuarially determined employer contribution (ADEC) policy would directly address the rigidity created by statutorily-set contributions and provide PERA managers and employers the opportunity to better maintain assets and stay on the path to fully funding member and retiree benefits. 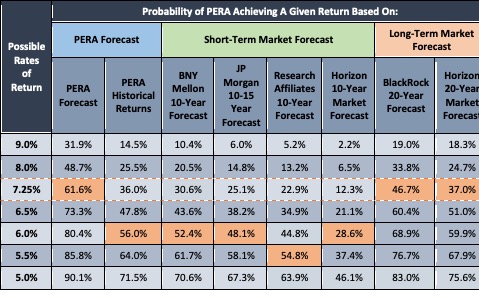 As seen in Figure 5, PERA’s cash flow grew from just negative $18 million in 2003 to negative $640 million in 2019. The latter is equivalent to roughly 4.13 percent of the market value of assets at the beginning of 2019, a level that has moved uncomfortably close to the 5 percent of asset market value threshold PERA administrators have warned may be a tipping point for that plan’s long-term solvency.

Rapid growth in negative cash flow means that mature pension plans like PERA will need to pay out a significant amount of pension benefits over the next decade or so and thus will not have a large portion of their current assets around in the years beyond that to make up for the lower earnings anticipated in the short- to mid-term, “new normal,” low-yield investment climate. 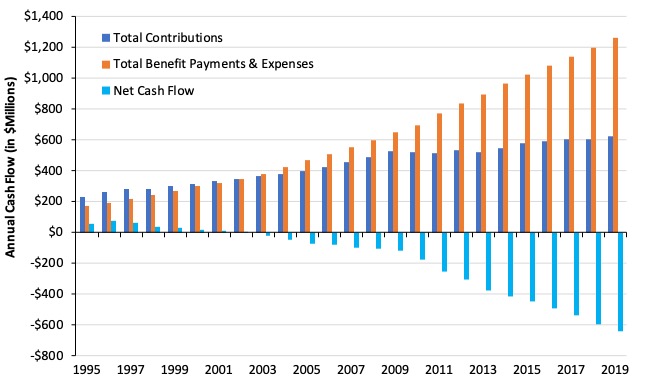 The current PERA reform proposal, although certainly a positive step to improve the current cash flow situation, does not address some key problems. Most notably, the bill does not reform PERA’s flawed contribution rate policy, nor does it require changes to what may be overly optimistic actuarial assumptions.

Further, policymakers should consider adopting pension stress testing requirements such that elected officials and taxpayers would have a way to gauge potential financial risks to long-term PERA solvency vis-a-vis market volatility and deviations from actuarial assumptions.

The proposed PERA reform also does little to address high rates of attrition among new hires for PERA employers. Eliminating the current 90 percent cap on an employee’s maximum salary used to calculate their pension benefits is likely to mostly affect mid- to late-career employees who are closer to retirement. By offering more portable retirement plan options to new hires (such as a hybrid or cash balance plan)—as has been an outcome of recent reforms in neighboring states like Utah, Colorado and Arizona—policymakers could expand retirement security to shorter-tenured public employees.

Though the current PERA reform proposal does not cover the full range of needed changes to ensure pension sustainability, the inclusive process used to develop the proposal landed on a substantive, meaningful set of policy changes and, even more importantly, established agreement among a wide variety of stakeholder groups.

Such bi-partisan support speaks to the effectiveness of the shared sacrifice principle the original Solvency Task Force’s recommendation adhered to. Eliminating some unfunded liability, increasing contributions and modernizing the COLA structure would all strengthen PERA’s solvency outlook and ability to keep the pension promises that have been made to PERA members.

To further these positive developments legislators should also consider more fundamental changes such as revisiting the plan’s actuarial assumptions and methods, improving retirement security by providing portable retirement options to the more mobile modern workforce, and aligning actual PERA employer contributions with what plan actuaries have determined need to be made each year.

However, the proposed PERA reform legislation’s success would rely heavily on the pension fund’s ability to achieve expected investment returns over a long period of time, which is likely to be a major challenge unless additional reforms are made that build upon this important first step.

Below we present a breakdown of how well the proposed PERA reform meets the Reason Foundation Pension Integrity Project’s reform objectives: 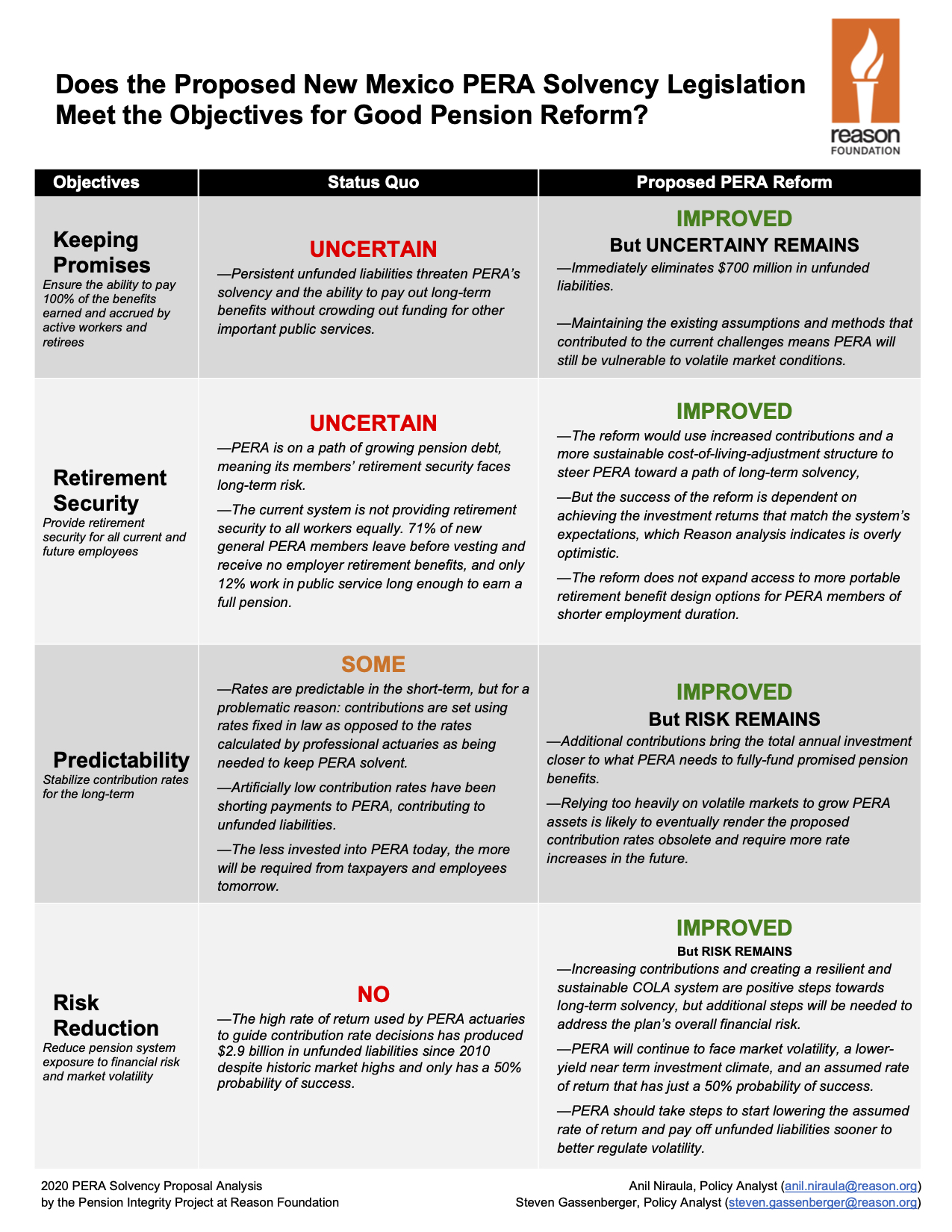 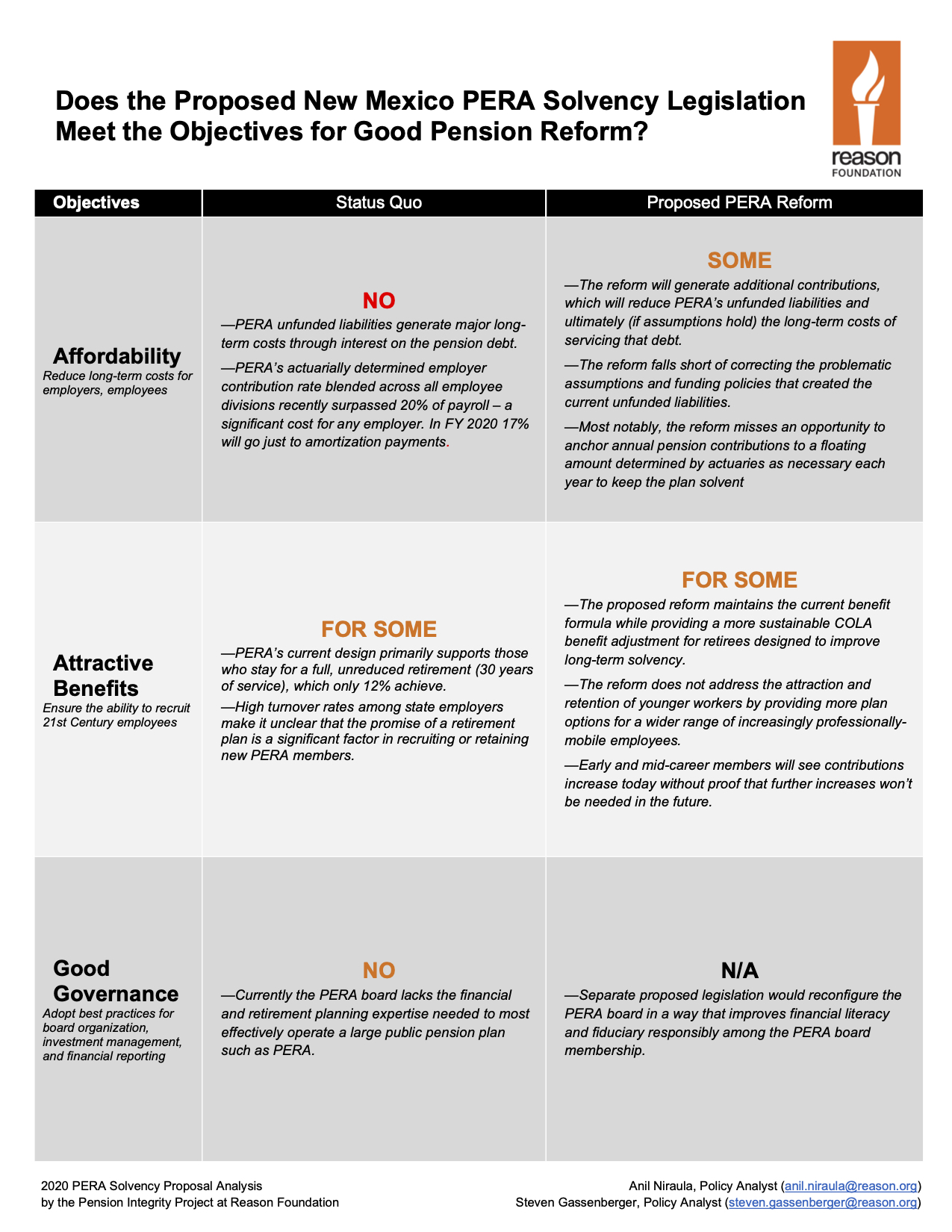