As market volatility and decreased government revenues continue to impact state and local pension plans across the nation, stakeholders and policymakers should be considering ways that they can protect taxpayers and retirees from future fiscal threats.

Because most public pension funds failed to recover from the Great Recession—despite a historic, decade-long bull market—they won’t be able to quickly recover from the current recession and future market events absent major reforms.

This is why New Mexico’s bipartisan effort by Gov. Michelle Lujan Grisham and the state legislature to enact Senate Bill 72 was a particularly well-timed move. Signed in March, this legislation was designed to improve the solvency of the state’s Public Employees Retirement Association (PERA) pension plan. These changes sought to better shield the plan from the types of uncontrollable market risks that manifested just weeks later as the COVID-19 pandemic reached the US.

New stress testing shows that such efforts might save New Mexico employers and taxpayers as much as 28 percent in total pension costs over the next 30 years. These results show that because of the reform, PERA will certainly be better off in the event of future worst-case recession scenarios.

SB 72  was a bipartisan reform designed to begin tackling PERA’s solvency challenges – which included over $6.7 billion in unfunded liabilities. The legislation was effectively the end product of a process launched by a gubernatorial task force that began examining the system in the summer of 2019.

Among the core provisions of SB 72 were:

After conducting an actuarial analysis of PERA’s funding, the Pension Integrity Project at Reason Foundation notes that absent SB 72 the plan’s unfunded liabilities would likely have nearly doubled to over $12 billion in the next 30 years.

This would have put greater stress on both public budgeting priorities and PERA cash flows compared to the pre-reform situation. With the passage of SB 72, PERA is more likely to eliminate its pension debt entirely by roughly 2047.

Still, under current economic conditions—and accounting for future “Black Swan” market-impacting events that may occur more frequently in the future— policymakers need to understand that improvement is by no means guaranteed.

This analysis, derived from a larger Pension Integrity Project risk assessment that involves Dodd-Frank-style stress testing to gauge PERA’s resiliency to future down-market scenarios, will reveal what PERA’s pension costs and overall solvency would have looked like both with and without the provisions of SB 72.

In June the Federal Reserve Bank of Atlanta projected that U.S. GDP could contract by as much as 53 percent in the April-June period. Capital markets have felt the whipsaw. In the previous quarter, the S&P 500 index dropped by 20 percent, with both equities and fixed incomes underperforming.  While the S&P 500 index fully rebounded by the end of June, the global economic outlook remains very uncertain. For example, massive economic disruptions related to COVID-19 remain, and state and local budgets have only just begun to enter what is expected to be a period of financial distress that rivals or exceeds that of the Great Recession.

It is likely that the current financial environment could fuel potential investment losses for many public pension plans this year and maybe years to come. Investment shortfalls will result in the accrual of additional unfunded liabilities, which drive up long-term costs for both employers and employees. Further, recent increases in unemployment rates mean that individual consumption and incomes could be depressed for some time, which is expected to translate into lower state and local tax revenues over the next several years. Lower revenues can undermine governments’ ability to make full pension contributions.

As a way to stress test a pension plan’s financial resiliency the Pension Integrity Project has applied a risk assessment methodology that, similar to the process used to test bank solvency under Dodd-Frank, simulates a one-year market downturn followed by a rebound. Similar to methodology used by Moody’s Investors Service, for the first year the test assumes pension plan experiences a significant investment loss equaling twice the expected portfolio volatility (as measured by standard deviation). The analysis then assumes a follow-up three-year market recovery with 11 percent average returns each year.

The results were found by analyzing 2019 capital assumptions, PERA’s asset allocation, applying the custom stress testing technique, and the assumption that PERA’s portfolio returns a -19.8 percent return in 2020, followed by three years of 11 percent average returns. The test also assumed that long-term investment returns eventually average out to 6 percent (less than PERA’s 7.25% return target) once markets rebound, as a way to reflect a more realistic target given the “New Normal” diminishing capital market outlook. It is worth emphasizing that the assumptions for stress testing scenarios are for informative purposes only, and are not meant to be interpreted as Reason’s projections of the actual fiscal year 2020 outcomes for PERA or any other pension system. You can find an interactive tool that shows how a variety of investment return scenarios would impact public pension plan funding across the nation here.

Given the relative frequency of economic downturns over the past two decades, the assessment also includes scenarios incorporating a second Black Swan crisis event in 2035. In the interest of reflecting some degree of appropriation risk—the risk politicians fail to fully fund pension contributions on a sound actuarial basis during a recessionary period amid budget deficits—scenarios that contemplate a hypothetical five-year employer pension contribution freeze are also included.

Overall, four separate stress testing scenarios below were evaluated, both pre- and post-SB 72:

State statutes currently establish the PERA contribution rate. This means that the rate is fixed by politicians and does not automatically adjust to keep up with the actuarially determined employer contribution rate (ADEC) needed to keep the system on track to full funding. For the purposes of examining stress and resiliency across scenarios most effectively, the four pre- and post- SB 72 crisis scenarios assume that the state pays the actuarially prescribed contribution amounts (ADEC) each year. Using the more responsive ADEC method allows one to see the progression in contribution rates and make a more informative comparison of multiple scenarios.

The true cost of a defined benefit pension plan over a period is not only in the total annual contributions over that time but also in any unfunded liability the plan accrues. This unfunded liability has to be paid off at some point. Making progress on paying down pension debt will ensure that pension costs are kept in check, thereby securing promised benefits. Thus, for conceptual purposes, an “All-in Employer Cost” concept that combines the total amount paid in employer contributions and adds what unfunded liabilities remain at the end of the forecasting window (adjusting both for inflation) to get a sense of the total scope of taxpayer obligations over time will be used.

PERA modeling results show that absent SB 72, employers’ “all-in cost” for PERA through 2049 would have amounted to $17.1 billion, assuming all plan actuarial and demographic assumptions are met.

SB 72 established shared increases in employee and employer contributions over the next four years. This combination of more funding and other benefit changes is expected to help eliminate the plan’s unfunded liability by 2049 versus without the reform (e.g. 100 percent funding under SB 72 vs. 73 percent without the law).

The lower long-term “all-in” employer cost for PERA suggests that accelerating this progression to full funding will save New Mexico employers and taxpayers a significant amount of money in the long run. But that baseline forecast assumes that no market shocks will occur, so it is important to also test how SB 72 affected PERA’s ability to respond to the current and any future recessions. 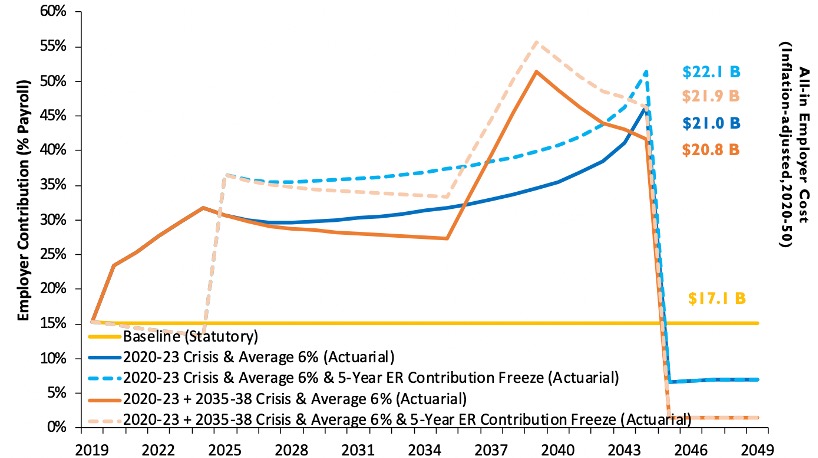 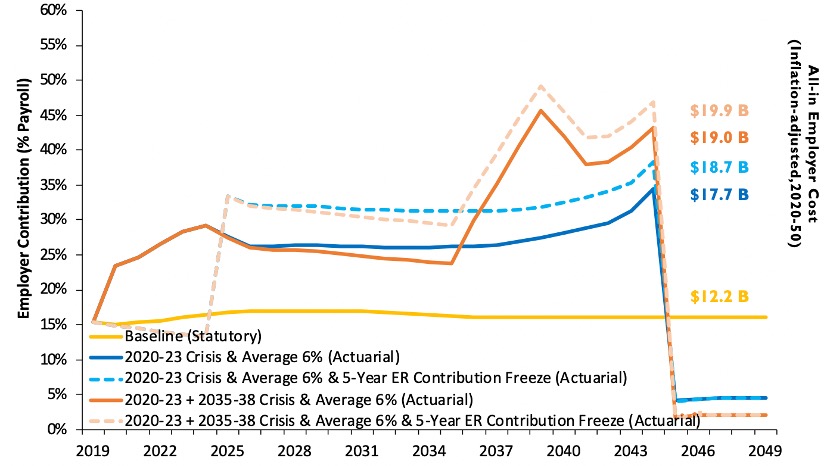 Per analysis of PERA’s funding under the first crisis scenario—a 2020 crisis and 6 percent long-term average returns—the combination of more funding and other changes enshrined in SB 72 will save roughly 16 percent in total employer contributions, and reduce ending unfunded liability by around 20 percent (both adjusted for inflation). This yields a net reduction in “all-in” long term costs of $3.3 billion (or 16 percent) by 2049. The additional stress scenarios (see Table 1) show similar new reductions in cost under SB 72 relative to the previous status quo in every case, indicating just how important the reform effort was for reducing long-term employer and taxpayer exposure to financial risk. 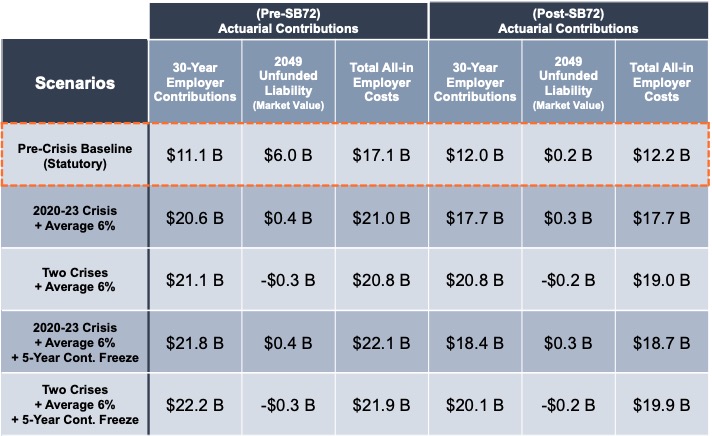 The legislation’s approach of equal contribution rate increases between employees and taxpayers and adopting a benefit adjustment mechanism designed to not pay out automatic, fixed-rate benefit increases represent a smart and collaborative balancing of interests between taxpayers, public employees and current retirees.

Senate Bill 72 created a solid platform to begin the critical work of improving PERA’s long-term solvency. The reform sets PERA up to be much more resilient to the investment and government revenue volatility that New Mexico is already facing in 2020. Other plans should follow New Mexico’s lead and take steps to reduce pension and investment risks and fortify their plans to better withstand future market shocks.