Despite being overfunded at the turn of the century, the Employees Retirement System of Texas (ERS), which provides pension benefits for state employees, is now facing the challenge of how to avoid insolvency in the coming decades.

With $14.7 billion in unfunded liabilities, the retirement security of state workers and retirees may be in jeopardy. Even the system’s own actuaries have warned that “there is a strong possibility that ERS will become insolvent in a 30-to-40-year timeframe, which is within the current generation of members.”

This very real threat is the result of two decades of underperforming investments, insufficient contributions, and undervalued pension promises. The $14.7 billion in unfunded benefits earned by, and owed to members and retirees have driven up pension costs and contributions that are ultimately borne by taxpayers and members alike. Furthermore, underperforming investments and growing liabilities have led to Texas reaching its constitutionally set cap on annual contributions. The cap on state contributions does not stop members from accruing benefits, however. The shocking growth of the Employees Retirement System’s debt can be seen below. 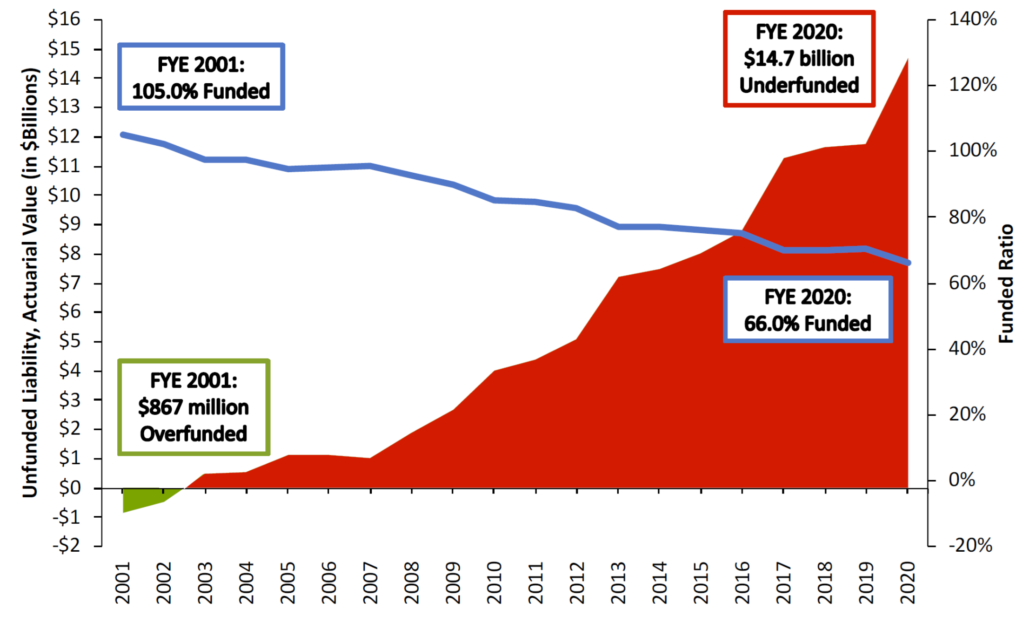 The latest solvency analysis by the Pension Integrity Project at Reason Foundation examines the factors driving the growth of the Employees Retirement System’s unfunded liabilities and presents a stress-test analysis to measure the impacts that future market scenarios could have on unfunded liabilities and required employer contributions. The solvency analysis reveals important findings, such as how overly optimistic investment return assumptions used by plan actuaries to value ERS each year have been the biggest contributor to the system’s instability.

A new, in-depth commentary on this ERS analysis is available here.

The Pension Integrity Project at Reason Foundation offers pro-bono consulting to public officials and other stakeholders to help design and implement policy solutions aimed at improving public pension plan resiliency and promoting retirement security for all public employees. We stand ready to help motivated policymakers and stakeholders understand the issues, and we maintain up-to-date actuarial models for both the Employees Retirement System and the Teacher Retirement System of Texas, which allows us to test the potential actuarial and fiscal impacts of a wide variety of potential policy changes.

Reason Foundation’s previous solvency analysis of the Employee Retirement System of Texas is available below: