This newsletter from the Pension Integrity Project at Reason Foundation highlights articles, research, opinion, and other information related to public pension challenges and reform efforts across the nation. You can find previous editions here.

The Pension Integrity Project has launched a new, ongoing series outlining best practices for public retirement system design. The series provides guidance to help states structure attractive retirement systems that meet the needs of both employees and taxpayers. It will also provide policy suggestions for states that are struggling with pension debt. The first two briefs in the series have been released. The first brief explores best practices in defined benefit pension system design and explains how risk-sharing can increase plan solvency, provide better accountability to retirees, and lessen the burden that unfunded liabilities have on taxpayers. The second brief details how defined contribution retirement plans can be designed to manage financial risk while also supporting the retirement security goals of today’s evolving and dynamic public sector workforce.

Assessing the Financial Health of the Arizona State Retirement System

In 2002, the Arizona State Retirement System (ASRS) had a $1 billion surplus of public pension assets. Less than 20 years later, the public pension system has nearly $16 billion in unfunded pension liabilities. A new solvency analysis by the Pension Integrity Project at Reason Foundation finds that investment returns falling below assumptions as well as interest accrued on pension debt have been the biggest contributors to the growing unfunded liability. If left unaddressed, this growing debt could cause the state to divert even more funding away from education, road repairs, and other public priorities.

In the wake of the Great Recession, then-West Virginia Gov. Joe Manchin signed a law reforming West Virginia’s municipal pension plans. A decade later, the local public pension plans have seen funding improvements due to the establishment of a pension oversight board and the option for new hires to shift to a statewide retirement plan. In this commentary, policy analyst Marc Joffe examines the details of the 2009 pension reform and notes how this effort can serve as an example for other states and cities to follow.

Lifetime Income and Defined Contribution Plans Are Not Mutually Exclusive

One common criticism of defined contribution retirement plans has been that they lack a lifetime income offering for their members. However, annuities that include lifetime income have long been flexible options that can provide a stable income for a retiree’s life and many defined contribution plans in higher education have had this valuable option for decades. Richard Hiller, a senior fellow with the Pension Integrity Project, details the best approaches for lifetime income options in defined benefit plans and discusses how annuity options can effectively meet the needs of public employees and employers.

According to Milliman’s annual funding study, the average state pension plan was funded at 70.7 percent as of June 30, 2020, down from 73.4 percent a year earlier. The report finds that while aggregate plan assets only rose slightly from $3.82 trillion to $3.84 trillion, aggregate pension liabilities grew from $5.07 trillion to $5.27 trillion. The COVID-19 pandemic has affected public pensions through market volatility, which has affected asset values. The pandemic also prompted some agencies to furlough government employees, which resulted in lower-than-planned contributions.

An updated report by Equable Institute summarizes many of the financial risks facing public pension plans during the COVID-19 pandemic and economic recession. These risks include investment returns below assumed rates, growing unfunded liabilities, and falling tax revenue. Despite a decade-long bull market leading up to 2020 and the COVID-19 pandemic, the aggregate funded ratio for all statewide pension systems is near its lowest point in modern history.

A new report from Bellwether Education Partners and TeacherPensions.org examines the Teacher Retirement System of Texas (TRS) and finds those plan members who accrue fewer than 27 years of service in the plan will leave with inadequate retirement savings. As a solution, they argue that TRS should offer a guaranteed return (cash balance) plan, which would allow teachers to leave the public employee workforce at any stage with the full value of their contributions and investments.

Internal vs. External Management for State and Local Pension Plans

“Fundamentally, achieving a 7 percent average annualized return isn’t the hardest part. The challenge as a public pension plan is to do so while attaining an acceptable and appropriate level of risk and diversification, amortizing an unfunded liability of over $14 billion, and honoring our commitment of lifetime income to over 140,000 members and beneficiaries.”

“Some of the implications of low interest rates are already clear. For example, a balanced portfolio of half stocks and half bonds has historically earned a return of 8.2 percent, or about 5 percent after inflation. My guess is that a more plausible projection is an inflation-adjusted return of about 3 percent… public and private pension plans are probably more underfunded than current estimates suggest.”

“All we’re doing is passing along to the citizens of Du Quoin what the state is calculating, [in terms of additional pension obligations]. This is not self-inflicted… I don’t like it. But in this case, you have to weigh funding your public safety or you have layoffs to pay for pensions.”

Each month we feature a pension-related chart or infographic of interest curated by one of our Pension Integrity Project analysts. This month, quantitative analyst Anil Niraula has provided an interactive chart that tracks the fiscal year 2019-2020 investment returns for state pension plans across the nation as they report their official returns. You can find the tool here. 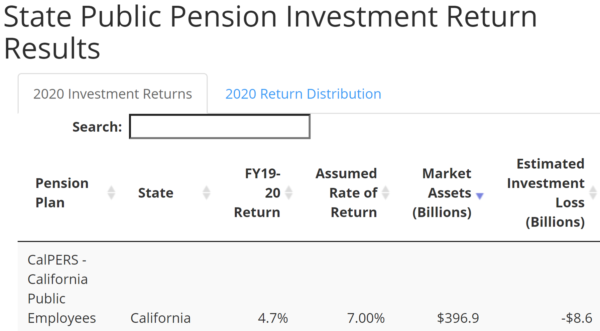 Follow the discussion on pensions and other governmental reforms at Reason Foundation’s website and on Twitter @ReasonPensions. As we continually strive to improve the publication, please feel free to send your questions, comments, and suggestions to alix.ollivier@reason.org.