In 2002, the Arizona State Retirement System was $1 billion overfunded and on track to provide the retirement benefits that had been promised to state and municipal employees as well as educators. Just 20 years later, the Arizona State Retirement System has over $15.9 billion in unfunded pension liabilities and has fallen deeper into debt each year since 2014.

Our newest analysis of the Arizona State Retirement System (ASRS), updated this month (December 2020), shows that costs for the system could potentially rise by almost $20 billion under some bad market scenarios. Additionally, the findings reveal how the past two decades of underperforming investment returns, interest on pension debt, and inaccurate actuarial assumptions have driven pension debt ever higher, resulting in diverting more and more funding away from Arizona classrooms and other public priorities each year.

One such finding is that overly optimistic investment return assumptions have been the biggest contributor to ASRS debt—adding over $10 billion in debt since 2002.

Not only does Reason Foundation’s latest solvency analysis examine the factors driving the growth of ASRS’ unfunded liabilities, but it also presents a stress-test analysis to measure the impacts that future market scenarios could have on unfunded liabilities and required employer contributions.

The findings show that ASRS has less than a 50 percent chance of meeting its set expected rate of return, and if it does not the system will fall even further behind. The growth of the public pension system’s debt can be seen in the chart below, which is pulled from the full solvency analysis. 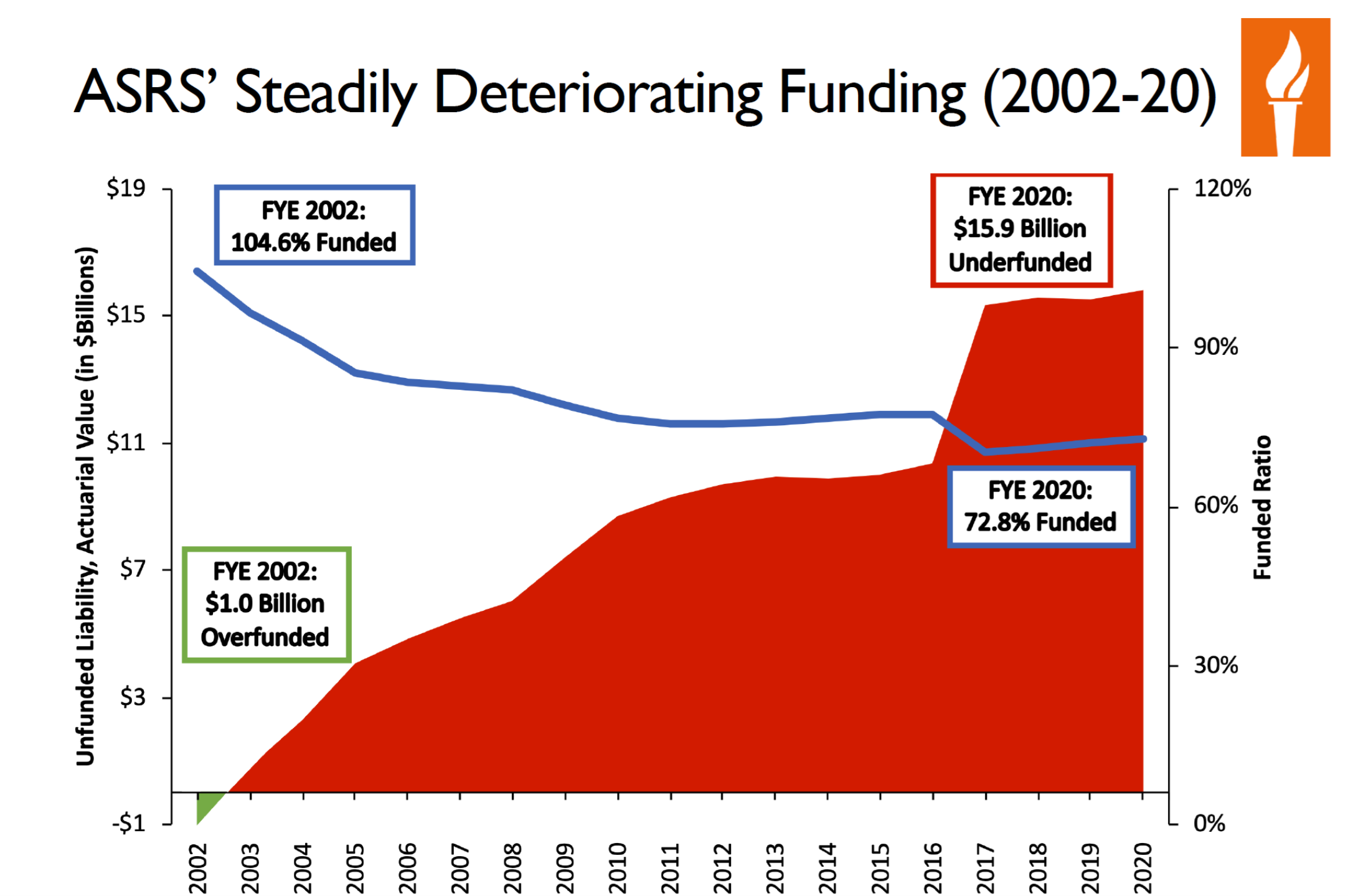 With only 72.8 percent of needed assets on hand today, this underfunding not only puts taxpayers and public servants equally on the hook for servicing ballooning pension debt (the costs of which have increased massively since the early 2000s) but also undermines both the salary growth and retirement security needs of a significant portion of the workforce, particularly younger Arizona educators and state employees.

A new, updated analysis will be added to this page regularly to track ASRS’s performance and solvency. The analysis will look at the primary factors driving unfunded liabilities over the past few decades and offer stress testing designed to highlight potentially latent financial risks the plan is facing. The report will also provide a number of policy suggestions that, if implemented, would address the declining solvency of the public pension plan.

The Pension Integrity Project at Reason Foundation offers pro-bono consulting to public officials and other stakeholders to help design and implement policy solutions aimed at improving public pension plan resiliency and promoting retirement security for all public employees. We stand ready to help motivated policymakers and stakeholders understand the issues, and we maintain up-to-date actuarial models for both the Arizona State Retirement System and the Arizona Public Safety Personel Retirement System, which allows us to test the potential actuarial and fiscal impacts of a wide variety of potential policy changes.