States vary greatly in the degree to which they centralize the management of their public employee pension plans. While some states, including Hawaii and Maine, have statewide public pension systems that cover all local government employees, others have dozens or even hundreds of locally managed municipal pension systems. States with a proliferation of locally-administered pension systems include Pennsylvania, Illinois, Minnesota, and Florida.

Table 1 shows the number of local public pension systems in each state in the Census Bureau’s 2017 Annual Survey of Public Pensions. 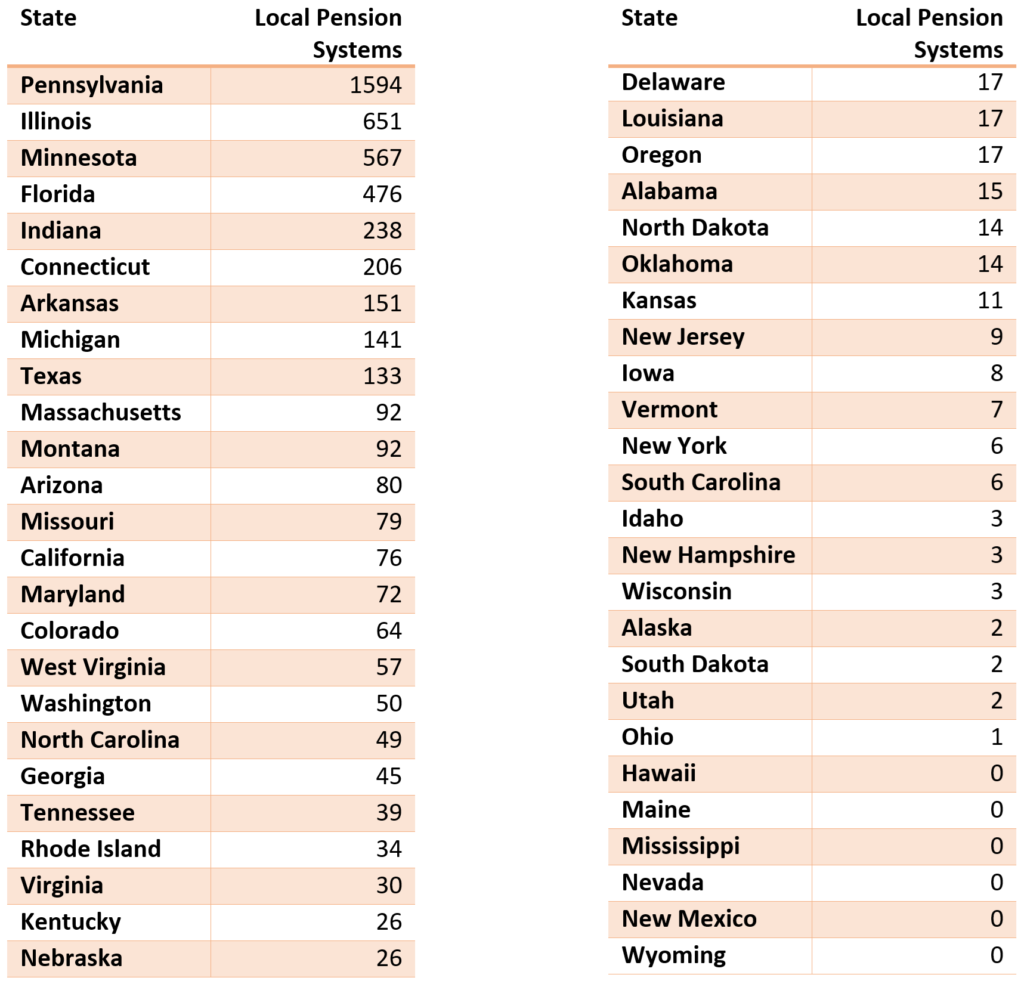 Many local pension systems across the country are deeply underfunded. The unfunded liabilities are creating severe pressure on cities and the other local government units responsible for funding them.

This issue was particularly pronounced in West Virginia, which more local public pension plans than about two-thirds of states.

Even before the Great Recession began in 2007, an actuarial analysis showed that West Virginia’s municipal police and fire plans had only 23 percent of the assets required to fully fund pension benefits already promised to workers. To address the problem, the state legislature approved Senate Bill 4007 in late 2009. The bill created the West Virginia Municipal Pensions Oversight Board to oversee 53 municipal police and firefighter retirement systems. The board educates local plan trustees, prepares actuarial valuation reports, and reviews medical examinations of police and firefighters seeking disability pension benefits.

Finally, the bill gave cities the option to close their single-employer plans and enroll new hires in a statewide plan—the Municipal Police Officers and Firefighters Retirement System (MPFRS). By 2018, 32 of the 53 legacy single-employer public safety plans had closed.

The oversight board publishes actuarial valuation reports for the local systems and produces aggregate statistics.

Chart 1 shows the funding progress of the legacy systems since Senate Bill 4007 was implemented. 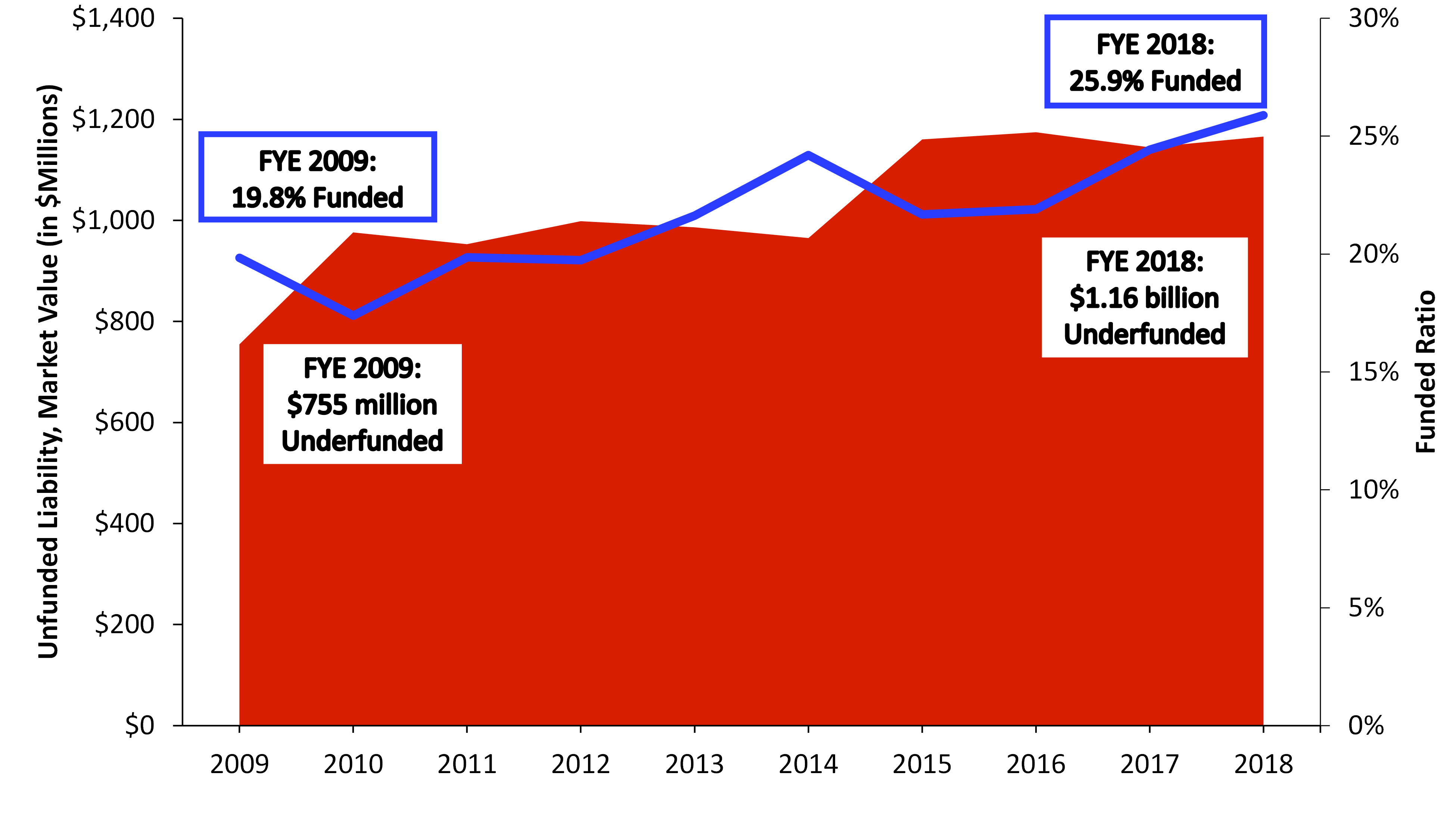 Over the past decade, funded ratios have gradually improved but total unfunded liabilities have increased in the aggregate for West Virginia’s local plans. A major contributor to this rise in reported pension debt is the adoption of more conservative actuarial assumptions.

Until 2015, the oversight board discounted plan actuarial liabilities by rates of between 5 percent and 7 percent depending on each plan’s funded ratio. As of 2015, it started lowering these rates to a range of between 4 percent and 6.5 percent, which is more conservative than the rates used by most public pension systems in the United States.

While lowering investment return rate assumptions like this results in a noticeable jump in unfunded liabilities, it is better understood as a recognition of obligations that were there all along, but were just recently recognized by the state and local administrations. The benefit of lowering these assumptions is the reduced risk of future unforeseen growth in pension debt from market results that come in below expectations, which is particularly important for severely underfunded plans like those found in the local governments of West Virginia.

Revenue from the insurance premium surtax—about $20 million in fiscal year (FY) 2020—is not sufficient to make a significant dent in the unfunded liability, but does provide added security for retirees in the event of pension fund depletion. In Charleston, the state’s largest city, surtax revenues covered 24 percent of benefit payments in FY 2019.

Ultimately, the aggregate unfunded liability should begin to decline due to the shrinkage of the individual systems. Active membership has declined from a peak of 1,749 in 2010 to 1,430 in 2018. Retirees and other beneficiaries increased over the same period from 2,045 to 2,183, but this number would begin to fall as deaths begin to outpace new retirements.

The new system, Municipal Police Officers and Firefighters Retirement System, or MPFRS, is still quite small, with just 370 active members and just one retiree as of July 1, 2019. Although employer and employee contributions are set to a fixed percentage of payroll rather than determined by actuarial analysis, the payments have been more than sufficient to maintain full funding.

As Chart 2 shows, the new fund has achieved a funded ratio of 177.5 percent with assets exceeding actuarial liabilities by $4.9 million.

Unlike the legacy pension systems, MPFRS uses a relatively high discount rate of 7.5 percent, suggesting that the reported level of excess funding is likely overstated.

Although SB 4007 has yet to reduce unfunded liabilities for West Virginia’s municipal police and fire systems, there does appear to be some light at the end of the tunnel. The conservative discount rate being applied to legacy system liabilities reduces the risk of large actuarial losses. A state tax revenue source is supporting payments to retired members of these systems. Long-term, these legacy pension plans will give way to a new statewide retirement system with firmer funding.

West Virginia’s 2009 pension reforms appear to have stopped the proverbial bleeding for the state’s local pension plans. Now it will be up to local governments themselves to appropriate the significant amount of funding needed to eliminate the pension debt that each entity accrued prior to the needed reforms.