A new Reason study by transportation expert Bob Poole explores the possibility of leasing state-owned toll roads through long-term public-private partnerships and using the net proceeds to reduce unfunded public pension liabilities. The study finds the middle-range of the net proceeds for the examined systems varies from $19 billion for the Illinois Tollway and $17 billion for the New Jersey Turnpike to just over $1 billion for the Kansas Turnpike. Because public pension debt is a problem in each of the nine of the states the study examines, the analysis highlights the percentage of each state’s 2018 unfunded pension liabilities that could be paid off if the medium-range net proceeds from a toll road lease were applied to the unfunded liabilities. Florida could actually cut its unfunded pension liabilities nearly in half if it leased its turnpike to a private company.

California courts have long protected what’s known as the “California Rule,” which interprets pension contracts as though they not only protect benefits earned and accrued benefits, but also guarantee at least as generous terms over the duration of one’s employment. Alexander Volokh, associate professor of law at Emory Law School, finds that two recent California Supreme Court cases largely maintain the “California Rule” status quo, yet provide possibilities for reforms around the edges in future legislation. Volokh also provides insight regarding the U.S. Supreme Court’s developing position on the Contract Clause and what it could mean for pension reform efforts across the country.

Most States Rely on Overly Optimistic Assumed Rates of Return

On the aggregate level, public pension plans’ average investment returns over the last two decades have fallen short of their return assumptions – and this year’s recession has exacerbated this trend. While the stock market has in many ways, recovered since April any market setback can have major and long-lasting effects for pension funds. A new interactive visualization by the Pension Integrity Project uses historic data for all state-level plans to illustrate how public pension plan’s investments perform compared to their expectations. This trend will need to be addressed if state governments are to live up to promises made to public workers.

A recent ruling by the Oregon Supreme Court upheld 2019 legislation that permitted the state to intercept an employee’s contributions dedicated to the defined contribution component of their hybrid retirement plan. These funds were then diverted to shore up unfunded liabilities in the defined benefit pension component of the retirement plan. In this commentary, Leonard Gilroy and Ryan Frost conclude that, while this ruling allows future legislatures the ability to make reasonable changes to maintain solvency, it unfortunately also validates a law that undermines the very concept of a hybrid retirement plan. The ruling could reduce Oregon’s public workers’ defined contribution benefit and could have negative implications for hybrid plans in other states.

The city of Portland, Oregon provides public workers a pension plan that is funded on an ongoing basis from year to year, also known as a pay-as-you-go plan. In this commentary, Reason’s Marc Joffe notes that while this contribution policy has not restricted the city’s ability to pay promised benefits as of yet, property value’s stagnating growth, the economic impacts of COVID-19, and persistent social unrest could create significant fiscal problems for Portland.

The Equable Institute has released its first annual report on the state of pensions in America and has found that the aggregate funding ratio for statewide plans is near its lowest point in modern history. Additionally, the report finds that the costs of funding pensions are likely to continue to grow as the majority of retirement systems have entered the current recession in a weaker financial position than they were going into the previous recession. The report warns that the negative trends affecting pension funds will not be resolved by sticking to the status quo, and will require funding policy improvements. The report can be found here.

Public Pension Reform and the 49th Parallel: Lessons from Canada for the U.S.

Unlike U.S. pension funds, which have drawn increased scrutiny over questions of long-term sustainability, Canadian pension funds are widely respected for their high funding ratios and smart funding policies. In a paper for the Journal of Portfolio Management, Clive Lipshitz and Ingo Walter studied the differences between U.S. and Canadian pension policies, as well as the historical factors that have led to these differences. They find that many of the reforms Canada undertook in the 1980s and 1990s could be replicated in similar plans in the U.S. The paper can be found here.

Like other states, Connecticut’s public employee pension plans have relied on increasingly risky investments in hopes of maintaining overly optimistic return assumptions. Unfortunately, the state does not disclose this investment risk to stakeholders – this is especially concerning as the state’s plans are some of the worst-funded in the nation. In a paper for the Mercatus Center, Andrew Biggs and Tracy C. Miller examine the true liabilities of some of Connecticut’s largest public pension plans, and find that fully funding these pensions would probably cost significantly more than the 13 percent of the state budget they already take up. The research paper can be found here.

“If you’re not going to achieve something, why do you keep using it or saying it? But the reason is … the less optimistic you are, the more money you have to put in… You start going from 7% to 6.5%, that’s a monster move. But it’s something that will need to take place over the next few years.”

“Frankly what will happen is the stock would be bought by someone else who does not have our position on this issue. I’m sure that many companies would be very happy if we just sold the stock and did not bother them any more on this issue.”

A lowered assumed rate of return presents a “unique opportunity to reduce our rate and reduce our risk in the future and still have savings. I don’t think we can continue to push potential costs, and therefore risk, into the future when we have an opportunity for us where both plans offer the state and local governments significant savings.”

Each month we feature a pension-related chart or infographic of interest created by one of our Pension Integrity Project analysts. This month Truong Bui compares state plan’s assumed rates of return to actual investment performances, demonstrating how long-term investment results have fallen below expectations for most plans across the country. Read more about the tool here. 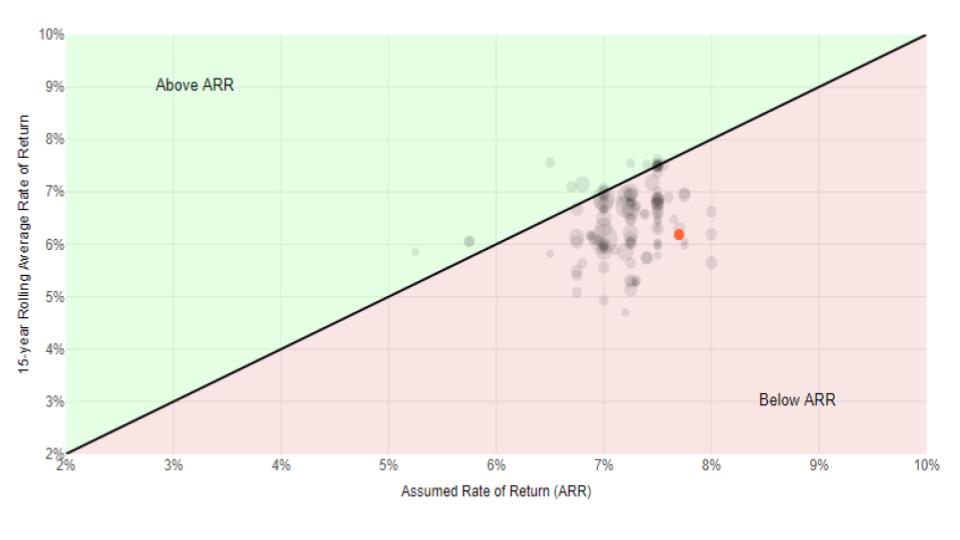