The Employees Retirement System of Texas (ERS) is $14 billion short on its pension obligations promised to public workers and the plan expects to exhaust its assets in the next few decades. This week, the Texas House of Representatives approved a bold solution that addresses many of the major challenges facing the plan.

The reform legislation, Senate Bill 321, establishes a cash balance plan for new members and also stops the chronic underfunding of the pension fund by committing the state to pay the annual actuarially determined amount needed to get back to full funding.

Reason Foundation’s recent analysis, which uses actuarial modeling to evaluate how this reform would affect the future costs and funding of ERS, finds that the bill would significantly improve the plan’s ability to live up to promises made to the state’s workers and could potentially save Texas $15 billion in long-term costs. It also finds that the proposed cash balance retirement plan could be a better fit for an increasingly mobile workforce.

Senate Bill 176, which was considered by the South Carolina State Legislature in the recently adjourned session, would have offered new state workers a choice between a modernized risk-reduced pension plan or an attractive defined contribution plan. Our analysis explores what this reform would have meant for future employees and taxpayers and finds that the bill would have provided new employees with a modernized set of risk-managed retirement options. The analysis also shows that despite these changes, the state pension plan would have remained vulnerable to market volatility. Going forward, South Carolina policymakers should consider amending the bill in the future to ensure the plan has a contribution policy that adjusts every year to meet the funding needs of the plan.

The 2021-2022 budget negotiated between the Arizona legislature and Gov. Doug Ducey incorporates a one-time supplemental $300 million payment dedicated to paying down pension debt within the state’s Public Safety Personnel Retirement System. An updated analysis from Reason’s Leonard Gilroy finds that accelerating the pension debt payment schedule would generate cost savings by reducing the accrual of expensive interest on the debt. The extra $300 million today could save up to $500 million in pension costs over the next 30 years, which benefits both taxpayers and PSPRS members.

Michigan’s state legislature is currently considering two bills that would enhance a public employee’s ability to use defined contribution benefits to secure guaranteed lifetime income via an expanded mix of annuity products. Reason’s Ryan Frost testified on these proposed bills to the Michigan House Appropriations Committee, indicating that they would advance the state’s continued effort to improve retirement security for the public workforce.

In 2020, Colorado policymakers elected to forgo a supplemental payment that was a part of the state’s major pension reform of 2018. Now, with a significant budget surplus, Colorado policymakers have a chance to not just make up for that lost payment but also consider dedicating even more funds to the state’s pension debt. A new report—produced by the Pension Integrity Project, Common Sense Institute, and Secure Futures Colorado—uses actuarial modeling of the Public Employees’ Retirement Association (PERA) to see how a one-time supplemental payment would affect the required annual contributions from the state and its employees. The report finds that an extra payment of $500 million would reap immediate annual savings for the state and employees.

A new report from TeacherPensions.org evaluates the difference between the retirement benefits for K-12 educators and those who are in higher education. They use five metrics to compare the plans offered to educators: the availability of members to choose their plan, how long it takes to achieve vesting, the value of the benefits offered, the level of unfunded obligations generated by the plan, and if employees are covered by Social Security. The report finds that K-12 teachers are often offered lesser benefits when compared to their higher education counterparts, with fewer options and longer vesting requirements. The report is available here.

The Public Sector Retirement Systems project at Pew Charitable Trusts published a new fact sheet on funding and forward-looking metrics of 100 public pension plans in 33 major cities from 2015 to 2017. The analysis finds that, while funding did improve in this timeframe, many cities are poorly positioned to withstand further market volatility and uncertainty. They identify half of the studied cities that aren’t contributing enough to actually overcome annual interest on their pension debt, meaning they weren’t actually reducing unfunded liabilities in the studied years. The analysis also examines how dependent each city is on investment earnings to achieve projected asset levels. The analysis is available here.

“I’m confident that this proposed plan strikes the appropriate balance needed to continue to provide our state employees and law enforcement and custodial officers a guaranteed retirement benefit, while also limiting the state’s risk and needing to come back to the table for future reform”

“In 2016, Arizona’s Public Safety Personnel Retirement System (PSPRS) was almost as unfunded as Illinois’ pensions, at 48% funded. Key stakeholders from both parties, and including the public safety unions themselves, recognized that change was needed, and the Pension Integrity Project team at Reason Foundation worked together with them to create a set of changes, primarily focused on reforming its out-of-control cost-of-living adjustment system, as well as instituting a risk-sharing system for new hires (with a proper actuarial analysis conducted at the time!), and new governance reforms…”

—Elizabeth Bauer, “How Did Arizona Succeed With Pension Reform? With One Weird Trick…” Forbes.com, May 13, 2021

Each month we feature a pension-related chart or infographic of interest generated by one of our Pension Integrity Project analysts. This month, quantitative analyst Jordan Campbell visualizes the funded ratios of each state’s pension plans between 2001-2019, along with changes made to their discount rate during that same timeframe. Read more about the tool here. 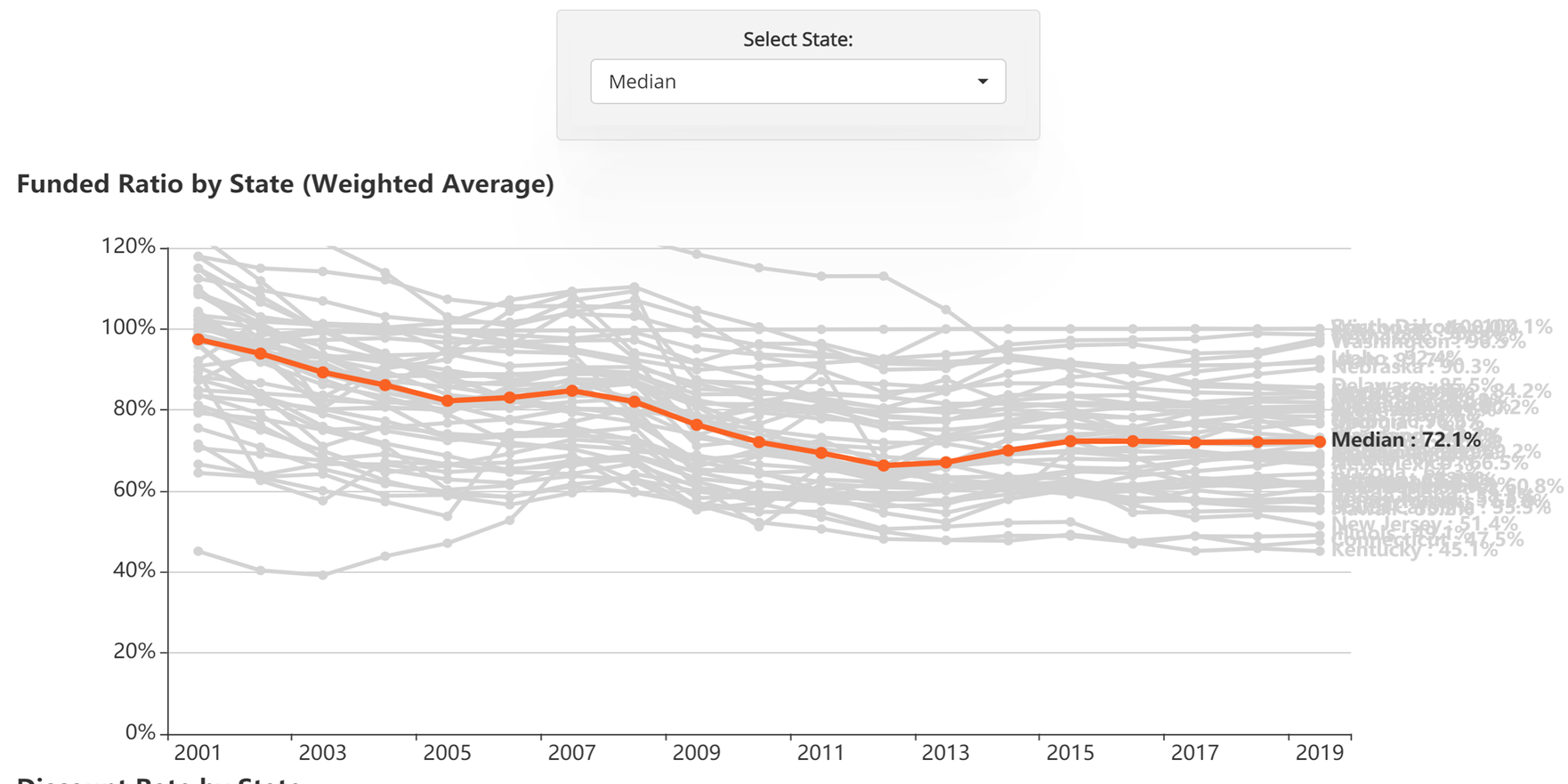 Follow the discussion on pensions and other governmental reforms at Reason Foundation’s website and on Twitter @ReasonPensions. As we continually strive to improve the publication, please feel free to send your questions, comments and suggestions to zachary.christensen@reason.org.