While public pension debt in states like Illinois and New Jersey have garnered more national attention, the Employees Retirement System of Texas now has nearly $15 billion in pension debt due to investment returns failing to meet the pension plan’s overly optimistic expectations and years of underfunding. In fact, the pension system’s administrators have warned Texas lawmakers that unless major changes are made, the plan is going to run out of money in the coming decades. 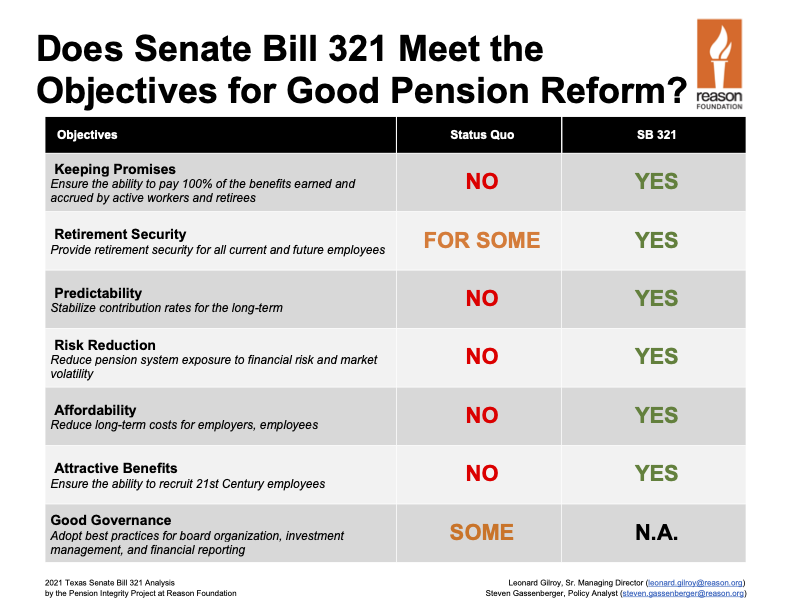 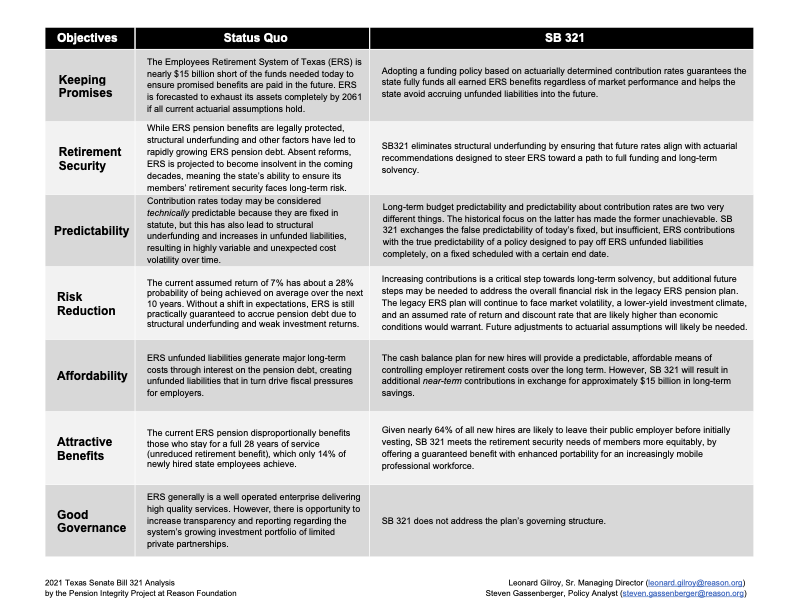 Luckily, the Texas legislature is considering a bill that would make much-needed changes to the pension system. Senate Bill 321, sponsored by Sen. Joan Huffman (R-Houston), would reverse the Employee Retirement System’s (ERS) financial free-fall, improve retirement benefits for most workers, and save taxpayers billions of dollars in the long run.

Growing pension debt is a problem akin to an oil spill, and there is a simple two-part solution to the issue: Step one is to cap the spill, and step two is to clean up the damage. Senate Bill 321 tackles both problems with one comprehensive solution.

To ‘cap the spill,’ SB 321 would enter all new state employees and law enforcement officers into a modernized and financially sustainable pension system known as a cash balance plan. The retirement plan would be designed similar to the two large state retirement systems that have effectively and affordably served most local governments in Texas and their employees for decades.

Cash balance plans blend the guaranteed lifetime benefit aspect of traditional pensions—with strong guardrails built in to avoid the accrual of massive debts—and the portability of a traditional private sector 401(k)-style plan. This plan will improve retirement security for most people hired by the state today.

Approximately 64 percent of newly hired state workers leave employment with the state before five years of service, forfeiting the employer contributions made to their pension plan on their behalf. The remainder of Texas employees that stay in their jobs see their benefits accrue very slowly. The proposed cash balance plan would be an immediate improvement for most new employees who are poorly served by the current ERS design.

But sending new hires into a sustainable retirement plan alone is not sufficient. To ‘clean up the spill,’ the proposed legislation would adopt a new method of funding ERS pension promises and is designed to ensure the current pension debt of nearly $15 billion is paid off completely. Not only would SB 321 eventually eliminate this debt, but Reason Foundation’s Pension Integrity Project actuarial analysis shows that this policy could mean over $15 billion in taxpayer savings over the next 30 years due to the bill’s commitment to making higher contributions in the near term to aggressively pay off pension debt.

By capping the spill of pension debt and putting in place a solid method to clean up the unfunded liabilities accrued thus far, Senate Bill 321 would set ERS on a more sustainable trajectory, provide billions in savings for Texas taxpayers, and better meet the retirement needs of today’s public workforce.