Despite being overfunded at the turn of the century, the Employees Retirement System of Texas (Texas ERS), which provides pension benefits for state employees, is now facing the challenge of how to avoid insolvency in the coming decades.

With $14.7 billion in unfunded liabilities, the retirement security of state employees and retirees may be in jeopardy. Even the system’s own actuaries have warned that “there is a strong possibility that Texas ERS will become insolvent in a 30 to 40 year timeframe which is within the current generation of members.” This very real threat is the result of two decades of underperforming investments, insufficient contributions, and undervalued pension promises. The shocking growth of the Employees Retirement System’s debt can be seen below. 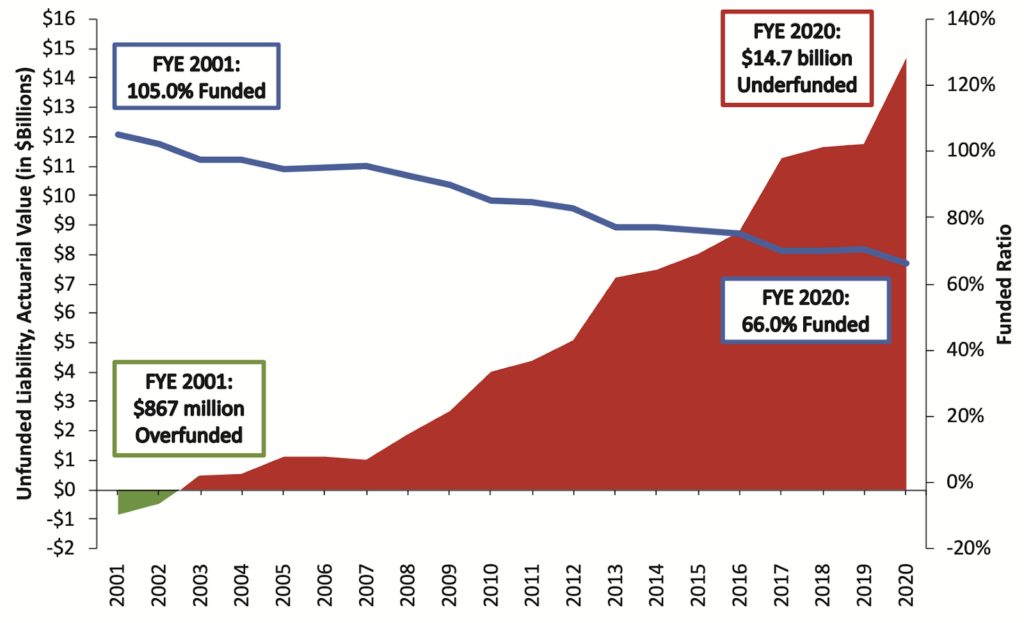 The $14.7 billion in unfunded benefits earned and owed to ERS members and retirees have driven up pension costs, which are ultimately borne by taxpayers and members alike. Furthermore, underperforming investments and growing liabilities have led to Texas reaching its constitutionally set cap on annual contributions. The cap on state contributions does not stop members from accruing benefits, however.

Investment Returns Have Underperformed for Years

The “new normal” for institutional investing suggests that achieving even a 6 percent average rate of return in the future is optimistic.

If you assume the current economy does not fully recover until 2023, and also predict an additional downturn sometime between 2035 and 2038, as well as a 6 percent rate of investment return over the next 30 years, analysis shows that Texas ERS’s unfunded liability would equal $64 billion in the year 2050. Currently, the state assumes that the plan’s unfunded liabilities will increase to only $26.8 billion by 2050.

Seeing as ERS Texas only averaged a 5.83 percent investment return rate between 2000  and 2019 and that we have seen two major economic crises in the last 20 years, it is reasonable to assume the next 30 years will look somewhat similar.

If this is the case, our projections show that the cost of the pension plan would increase to nearly 25 percent of employer payroll, putting significant strain on the state budget.

Texas Constitution Article 16, Section 67(b)(3) caps state contributions to Texas ERS at 10 percent of payroll, which can only be exceeded under an emergency declaration and requires that benefits should be financed in a way that is consistent with best practices.

The definition of actuarially sound principles is not expressly defined in the Texas Constitution, however, The Society of Actuaries Blue Ribbon Panel has outlined pension best practices, such as ensuring the amortization schedule is less than 30-years and paid off over a fixed period.

The need for higher contributions is likely to be on-going for at least the next 20 to 30 years. Thus, the use of an emergency clause would likely not be a viable solution should the legislature desire to contribute above the 10 percent of payroll cap on contributions.

With the employer contribution rate fixed in statute and a 31-year, open amortization policy, Texas ERS now faces an infinite amortization period, meaning it is not projected to ever pay off its unfunded liabilities.

Setting contribution rates in the statute that are below ADEC and using optimistic return assumption resulted in interest on ERS Texas debt exceeding the actual debt payments (aka negative amortization) and have added a net $4.46 billion increase in the unfunded liability since 2001.

Changes in Actuarial Assumptions and Methods

ERS Texas made alterations to its actuarial assumptions (e.g. changes in the assumed rate of return in 2017) that have collectively unveiled $2 billion of hidden unfunded liabilities from 2001-2020.

Deviations from Service Retirement and Other Demographic Assumptions

ERS’s unfunded liability has increased by $1.45 billion between 2001-2020 due to misaligned demographic assumptions, which include deviations from the plan’s withdrawal, retirement, disability, and mortality assumptions.

ERS employers have not raised salaries as fast as expected, resulting in lower payrolls and thus lower earned pension benefits. This has meant a reduction in unfunded liabilities of $1.1 billion from 2001 to 2019.

However, overestimating payroll growth is creating a long-term challenge for ERS because of its combination with the level-percentage of payroll amortization method used by the plan.

This method backloads pension debt payments by assuming that future payrolls will be larger than today (a reasonable assumption). But when payroll does not grow as fast as expected, employer contributions must rise as a percentage of payroll. This means the amortization method combined with the inaccurate assumption is delaying debt payments.

The discount rate for a public pension plan should reflect the risk inherent in the pension plan’s liabilities:

Setting a discount rate too high leads to undervaluing the amount of accrued pension benefits:

If a pension plan is choosing to target a high rate of return with its portfolio of assets, and that high assumed return is then used to calculate/discount the value of existing promised benefits, the result will likely be that the actuarially recognized amount of accrued liabilities is undervalued.

It is reasonable to conclude that there is almost no risk that Texas would pay out less than 100 percent of promised retirement income benefits to members and retirees:

Article 16, § 66(d) of the Texas Constitution protects against impairment or reduction of accrued pension benefits “[A] change in service or disability retirement benefits or death benefits of a retirement system may not reduce or otherwise impair benefits accrued by a person…”

The discount rate used to account for this minimal risk should be appropriately low:

The higher the discount rate used by a pension plan, the higher the implied assumption of risk for the pension obligations.

The Existing Benefit Design Does Not Work for Everyone

The turnover rate for members of ERS suggests that the current retirement benefit design is not supporting goals for retention. 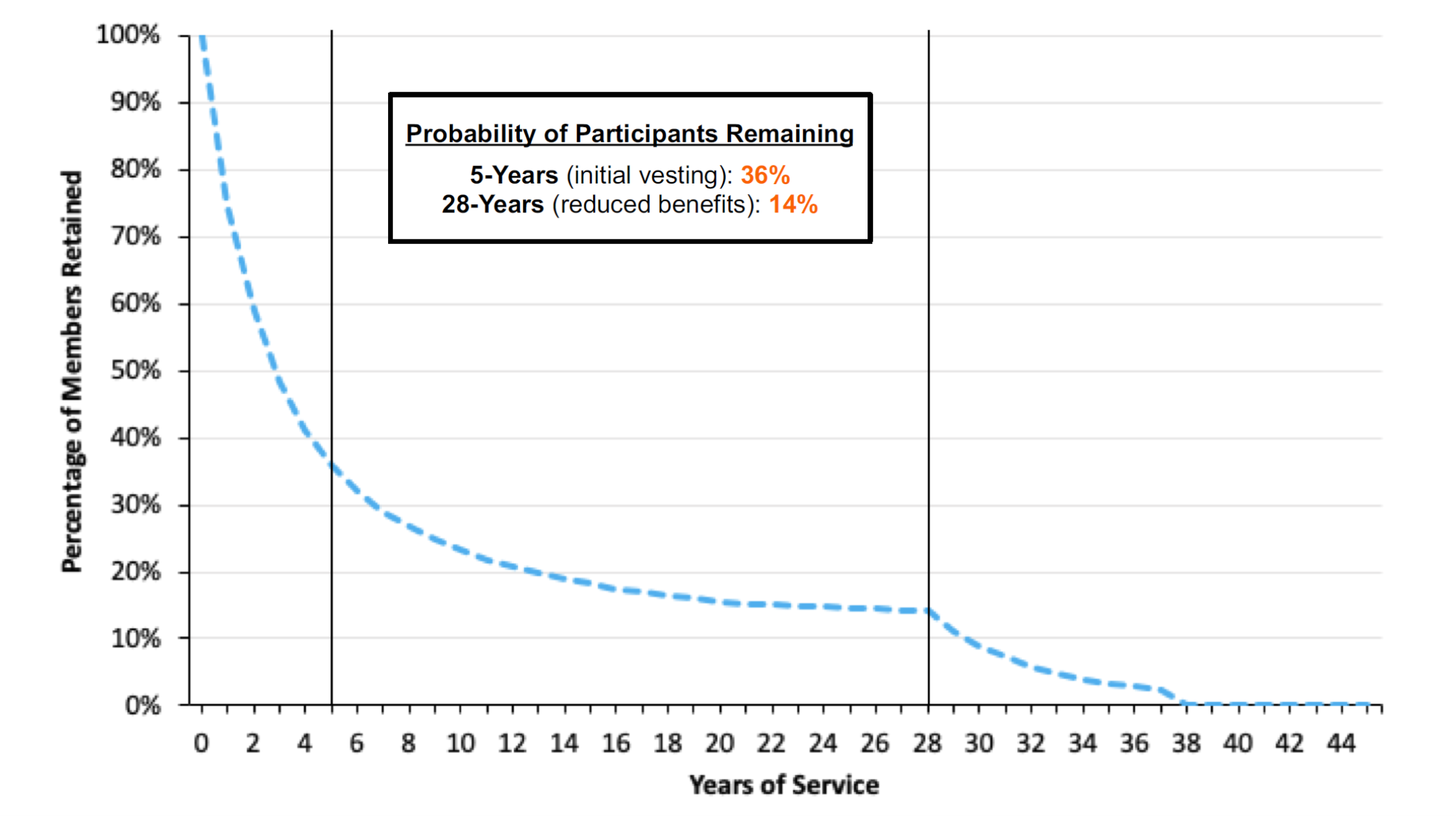