The COVID-19 pandemic is impacting everyone in countless ways. Those with their eyes on public pensions are just beginning to assess the aftermath on retirement security and funding. The Pension Integrity Project has now released a tool that for the first time lets anyone see the immediate results of 2020’s losses on state pensions. Users can select any of the country’s state-level pension plans to see how unfunded liabilities and funded ratios will react to various 2020 market scenarios, as well as assess how their state will fare compared to others with an interactive map feature. Before the coronavirus pandemic, state pensions were already facing $1.2 trillion in unfunded pension liabilities. According to Pension Integrity Project analysis, market losses from the pandemic could result in that shortfall skyrocketing as high as $2 trillion, depending on the returns achieved for the current fiscal year.

Pensions Need to Be More Resilient to Market Turbulence

After what could best be described as an inadequate recovery after the Great Recession, and now a significant hit to assets in 2020, it is time for policymakers to accept the reality pension funds now find themselves in. Market shocks have taken their toll on the funding of public pensions nationwide, and it is becoming abundantly clear that these funds will not be able to invest their way back to full funding without major structural and philosophical changes. In this commentary, Reason’s Leonard Gilroy and Zachary Christensen discuss the ways in which America’s pension plans have been unprepared for unforeseen events, and the ways plans can and should become more resilient to a future full of the unknown.

Despite a historic bull market, many public pension plans have continued to see growth in their unfunded liabilities over the past decade. According to a new policy brief by Reason’s Anil Niraula and Truong Bui, this is largely due to across-the-board investment underperformance relative to return targets, suggesting managers of pension funds need to adjust expectations to a new reality. The “new normal” of pension investments is characterized by low dividend rates, ultra-low interest rates, subdued economic growth, subpar inflation, and increased market volatility. This brief discusses the importance of reforming to adapt to this evolving situation, as failing to act will leave the retirement security of public workers at risk.

Calls Grow for Federal Assistance in State and Local Pensions

Facing an estimated 20% drop in funded levels, state pensions around the country have been forced to find new sources of funding. Illinois has even gone to the step of asking Congress for a bailout in order to meet its fiscal duties. However, many pensions were facing decades of underfunding even before the coronavirus recession. Reason’s Marc Joffe notes that without taxpayer protections, bailouts could lead local governments could shift money away from their pensions to other budget priorities. Reason’s Jen Sidorova argues that Illinois was using the situation to escape responsibility for decades of mismanagement.

Excessive debt accrual during a period of stable growth has placed Arkansas in a tricky situation. From 2008 to 2019, Arkansas’ pension debt almost tripled from $2.7 billion to $6.7 billion. Scheduling adequate debt payments is critical to keeping promises to workers and retirees. In a new analysis, the Reason Foundation has investigated the financial situation of the Arkansas pension plan. The report finds multiple examples of reforms that could aid in restoring solvency. These included lowering overly optimistic assumed rates of return, tightening amortization schedules below 20 years, paying 100% of actuarially determined employer contributions and considering additional plan designs.

Retirement Plans for Teachers Need to Adjust to Modern Demands

According to the National Education Association, a “pension is an earned benefit that encourages people to enter and remain in education over the long term.” The common belief among many educational professionals is that a guaranteed pension is critical to teacher recruitment. However, this relies on the assumption that teachers may stay with a district for decades. In 2018, the median tenure of state government teachers was 5.9 years. Reason’s Richard Hiller argues that a changing labor force makes the need clear to modernize benefits for an evolving teaching profession.

Even before the impact of the coronavirus pandemic upon markets, Georgia’s Teachers Retirement System (TRS) was $22 billion short of what it needed on hand to pay for the pension benefits promised to its teachers. Georgia’s House Retirement Committee deliberated on four separate reform bills over the past two legislative sessions, with all of them failing to achieve passage. In this commentary, Reason’s Jen Sidorova and Leonard Gilroy summarize and evaluate these attempts at reform. They caution that these bills—while mostly positive incremental steps—were not sufficient to fully fix the issues facing TRS.

In Q4 2019, BlackRock estimated the average public pension plan to be approximately 72% funded. Now a recent analysis estimates pension assets to have fallen approximately 27% on average due to the COVID-19 crisis. Blackrock advisors describe the types of recovery that could take place after the crisis, arguing that this market downturn is not equivalent to the 2008 financial crisis, because the broader economic and market backdrop are on far firmer footing than the instability surrounding financial markets in the wake of the 2008 crash. The entire analysis can be found here.

From 2011-2018, overall Michigan education spending was rising. But controlling for the rising costs of pensions, spending on Michigan K-12 education was actually $500 million less in 2018 than in 2011. A new report from Eqauble Institute examines this trend, finding that pension cost growth has outpaced growth in education funding nationwide. Overall, they find that the share of K-12 education spending dedicated to pensions has increased from 7.5% in 2001 to 14.4% in 2018. This means that funding pension benefits is taking up more and more of a school district’s budget, thus representing a hidden cut to education funding. The brief can be found here.

Have Localities Shifted Away from Traditional Defined Benefit Plans?

Since the 2008 financial crisis, some local governments have been looking for alternatives to traditional defined benefits plans for their employees. Jean-Pierre Aubry and Kevin Wandrei of the Center for State and Local Government Excellence examined the trend towards alternative retirement programs across state and local governments in the US. They find that between 2001 and 2019, the number of local governments offering retirement benefits outside of traditional pensions increased from 11% to 19%. They also noted that the states that offered alternative retirement benefits were more likely to offer hybrid plans rather than defined contribution plans after the financial crisis as compared to before. The entire brief can be found here.

“Without a significant market rebound, that’s going to result in some new unfunded liabilities that are going to be material and compounded on top of the already unfunded liabilities. This will push up government contribution requirements. Given the already unfunded positions, if governments don’t quickly increase their contributions, the longer-term consequences for pensions are severe.”

“Coming off the heels of what was a stellar fourth quarter in 2019, the economic fallout from the COVID-19 pandemic has completely wiped out any public pension funding gains we saw last year,”

“Since 1975, every governor has budgeted and every General Assembly has appropriated sufficient money to fund the requirements set by the actuary and board of trustees…Some states will provide pension improvements but not fund those pension benefits, or in tough times, not include funding in the budget for the actuarially required amount for the year.”

Shelli King, Director of Communications at the Tennessee Department of Treasury, quoted in “Tennesee Public-Pension System Loses Value in Pandemic, But Is In Better Shape Than Most States”, The Center Square, April 7, 2020.

“We hit for power. We were sluggers. We were the Barry Bonds of public pension funds. We would often go up and hit a home run or strike out. But we have worked really hard to change that distribution. We have given up power for average. We are not swinging for the fences as much as we used to. We hope we are not striking out as much, and we are focusing not on slugging percentage, but on on-base percentage. That effort has resulted in a slight change in the distribution, not dramatic but slight — and meaningful.”

Each month we feature a pension-related chart or infographic of interest curated by one of our Pension Integrity Project analysts. This month, Truong Bui built a new tool to see the impact of COVID-19 upon state pension plans. Read more about the tool here. 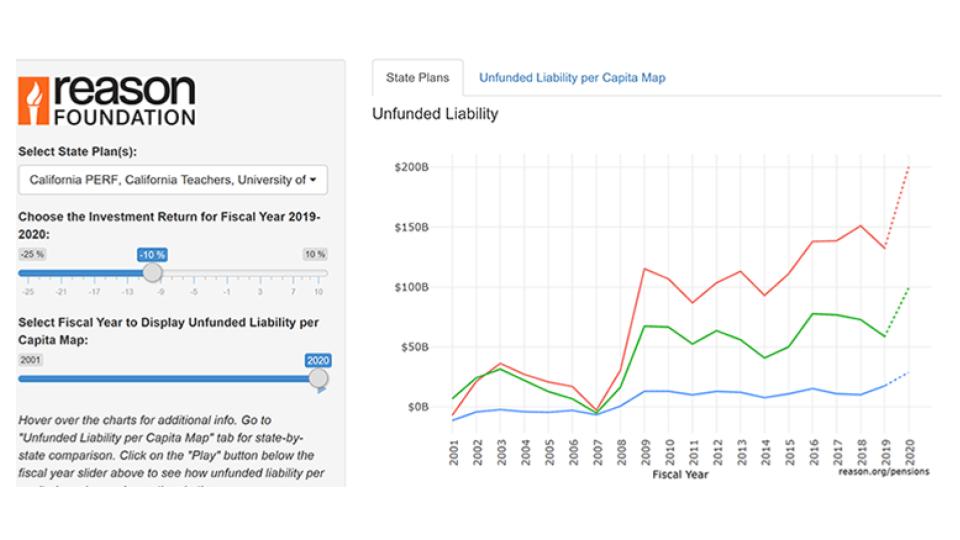