Even prior to the recent COVID-19 pandemic-driven market turmoil, many public retirement systems have been experiencing degraded solvency due to large investment shortfalls. Arkansas’ public pension plans have been no exception.

Both the Arkansas Public Employees Retirement System (APERS) and the Arkansas Teacher Retirement System (ATRS) returned a mere 5.3 percent on their investments through the end of the 2019 fiscal year, falling short of their long-term targets of 7.15 percent and 7.5 percent, respectively. Such shortfalls, along with an overall trend among pension plans toward riskier investments, reinforce the dangerous path of debt accrual both plans have been on since 2008.

Combined public pension debt in Arkansas almost tripled from $2.7 billion to $6.7 billion between 2008 to 2019. Without meaningful changes, all stakeholders, including taxpayers and public employees, stand to lose. If the solvency of the state’s largest public pension plans continues down this path it puts pension promises made to thousands of public workers in jeopardy.

Back in August, the Pension Integrity Project at Reason Foundation examined APERS’ early investment results, which at the time suggested that the pension fund had a good chance of hitting its return target for 2019. However, lackluster yields in the last quarter brought annual returns below both plans’ investment return targets, likely adding yet more debt from investment shortfalls to their ledgers upon reconciliation at the end of the fiscal year.

New developments—caused mostly by the COVID-19 pandemic—don’t instill hope either. As The Wall Street Journal reports, the longest bull market in U.S. history suddenly ended this March. The economy being brought to a halt by the rapidly spreading global virus is already causing historic spikes in jobless claims and rattling capital markets. The S&P 500 index dropped by as much as 20 percent through March 31, 2020.

Over the course of that same quarter, the yield on the benchmark 10-year Treasury note fell more than 50 percent. With both APERS and ATRS heavily invested in equities and fixed income instruments, such headwinds, which are likely not yet over, portend potentially severe investment shortfalls and asset depletions this year.

Yet, the “new normal” of a lower-yield investment climate is not a recent revelation. In fact, US public pensions have been on a spree of investment returns falling below expectations since the dot-com bubble burst in 2000, mainly due to pension systems setting overly optimistic return targets and making risky investment choices. The situation particularly worsened in 2008-09, due to depleted pension coffers. Eventually, flawed investment policies ramped up downside risks so much that despite healthy market returns since 2010—during the longest economic expansion in U.S. history—these investment choices failed to grow Arkansas’ public pension assets sufficiently enough to close the large gap with actuarial liabilities (see Figure 1). 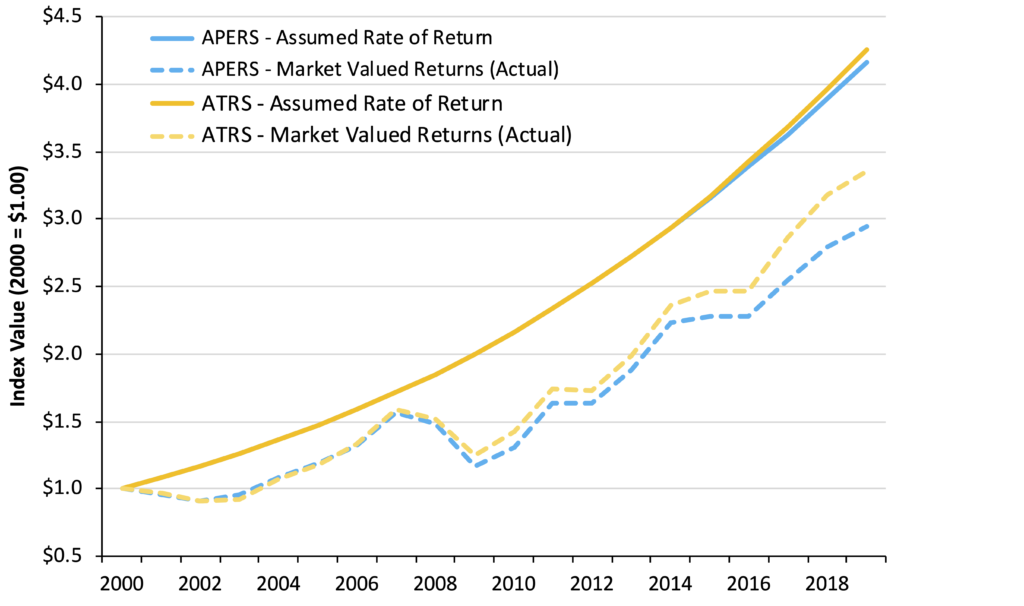 “Exposure to pension investment volatility is a credit risk because governments must be able to withstand the downside when short-term asset risk materializes, while still delivering public services and repaying debt[pension and other public debt]”, said Moody’s Vice President Thomas Aaron in 2016.

Indeed, underperforming investments are one of the key drivers behind Arkansas’ current pension debt. Other contributors to the shortfall are interest accruals exceeding contributions and benefit enhancements, such as cost of living adjustments.

To spare tomorrow’s taxpayers and public employees colossal pension bills, the most apparent solution is to lower investment return targets, aggressively pay off unfunded liabilities and curb the growth of any new debt.

That last part—preventing further growth of pension debt—could prove to be a challenge if market experts are to be believed. Even before coronavirus and the global market upheaval of early 2020, the forecasts of many investment advisors suggested that future returns were likely to be below past results, reinforcing the idea that we will be experiencing a “new normal” low-yield environment for at least over the next 10 to 15 years.

Additionally, with the latest COVID-19 developments, we may very well be entering a recession right now. As of March 2020, the Federal Reserve Bank of New York has also projected there is a roughly 31-percent chance of a recession by February 2021.

Combined, these factors should give pension administrators, stakeholders and the public an idea of why changes to the plans’ investment expectations are in order.

ATRS’s consulting actuary confirmed as much during a recent meeting by stating, “unless something major happens in the investment markets that makes forecasting going forward look a lot more rosy than we have seen, we are probably going to come back and recommend that you lower the assumed rate of return.”

It is safe to say that recent market developments have been anything but rosy.

Unfortunately, plan administrators may be reacting to these ever more frequent shortfalls by making riskier investments in search for higher yields. For example, ATRS already invests as much as $2.2 billion, equal to 12 percent of all assets, into risky private equity funds. Both APERS and ATRS have been hunting for alternative, higher-stake asset allocations since 2010. Now, roughly 20 percent to 30 percent of the plans’ investment portfolios sit in private equity, real estate, and other alternative categories.

Over the years, this risk-taking behavior made investment returns much more volatile on a year-over-year basis. Such Hail Mary desperation attempts end up increasing the risks of significant asset losses, which puts Arkansas’ credit rating and pension sustainability in jeopardy.

Back in September, APERS’ executive director spoke to the Arkansas legislature’s joint retirement committee and mentioned high cash flow demands, as related to the maturity of APERS. Mature pension systems like ATRS and APERS have much larger numbers of retirees than active members and tend to pay out more in benefits than they take in from contributions. Both plans will need to pay out a significant amount of pension benefits in the next decade, which will require a large portion of assets to be paid out instead of benefiting from investment compounding.

Last fall, the joint retirement committee hosted statewide meetings to give Arkansas pension plan members a chance to discuss their concerns and learn about the status of Arkansas’ public pensions from system administrators. Such educational events featuring major stakeholders may help bring various factions to the table to better evaluate pension risks and promote constructive change on both sides. These changes should include:

Taxpayers, public officials, and public employees all have skin in the game when it comes to the fiscal health of Arkansas’ public pension plans and should take heed of the challenges ahead. The investment underperformance in 2019 and the looming 2020 financial losses caused, in part, by the COVID-19 pandemic are reminders of the high investment and solvency risks that public pensions in Arkansas face. All stakeholders should press for meaningful change that will help ensure Arkansas public pensions remain sustainable, predictable and affordable for both current and future generations.