Even before the global economic turmoil unleashed by COVID-19, Georgia’s pension plan for retired public K-12 teachers was $22 billion short of what it needed to have on hand to pay for its long-term, constitutionally protected pension benefits. This has prompted legislators to propose various pieces of legislation that would address underfunding challenges. These challenges have expanded by an unknown, but likely profound, degree amid the pandemic and resulting economic devastation playing out in real-time.

The legislature’s inability to generate consensus on any of the proposed bills is a bad sign. However, given that the legislation did not sufficiently address the scale of the problem that existed even before the COVID-related crash, there is an opportunity for better reform in the future.

During the past two legislative sessions, Georgia’s House Retirement Committee has deliberated on four bills—HB 662, HB 667, HB 109 and HB 830—aimed at improving the solvency of the state’s Teacher Retirement System (TRS). For the purpose of this discussion, we will assume that the legislature—which at press time remained quarantined in a suspended legislative session—is unlikely to take action on these bills prior to Sine Die for the 2020 legislative session once scheduled.

In a February analysis, Reason Foundation’s Pension Integrity Project found that HB 662 and HB 667, while not comprehensive solutions to the challenges facing TRS, would have significantly improved the system’s long-term solvency. HB 109 would have marginally helped by adding contributions, but HB 830 would have likely increased risk and lessened valuation transparency, which seems counterproductive.

Actuarial consultant Milliman recently predicted that pension funding ratios would decline by over 20% as a result of COVID-19. If warnings like this come to fruition the pandemic’s impact on the global capital markets is almost certain to expose pension plan vulnerabilities across the country, including Georgia TRS. Because of this, it is important to understand the impact that the proposed bills could have had in order to guide future policy decisions.

Taken together, the proposed bills reveal that the legislature senses pension risks need to be reduced and addressed. Yet it seems that the legislature is also counterintuitively clinging to a false hope that the problem can be solved by investing in riskier assets that bring in even higher volatility and unpredictability.

If anything, the current fiscal distress facing TRS highlights the need for a comprehensive approach to adjusting TRS assumptions, funding policy, and plan design elements. Doing so would create a resilient, fiscally stable pension system that would deliver earned benefits to employees without becoming an overly-burdensome drag on annual budgets. Therefore, it is more important than ever to keep the conversation about potential improvements alive for future legislative sessions. Below is an analysis of previously proposed legislation:

This bill would have lowered the TRS assumed rate of return (ARR) from 7.25 percent to 6.75 percent, recognizing a more accurate accounting of the plan’s promised benefits. It would have resulted in a much needed additional $17.7 billion in employer contributions over the next 30 years (see Figure 1). As our previous analysis discussed, this outcome, while a significant increase in cost, would have improved the system’s ability to keep promises by reducing the risk of insolvency and improving the long-term predictability of contribution rates.

With the failure of HB 662, the risk of rapidly growing pension debts remains high. Lower investment return scenarios, similar to what we appear to be experiencing now, meant that the system’s unfunded liabilities and costs of servicing pension debt would grow more than they would have under the reduced ARR in HB 662. Like any debt—especially debt that grows at an annual rate matching the plan’s ARR, 7.25 percent in TRS’s case—the more you prepay now, the less you pay overall in long-term interest costs. 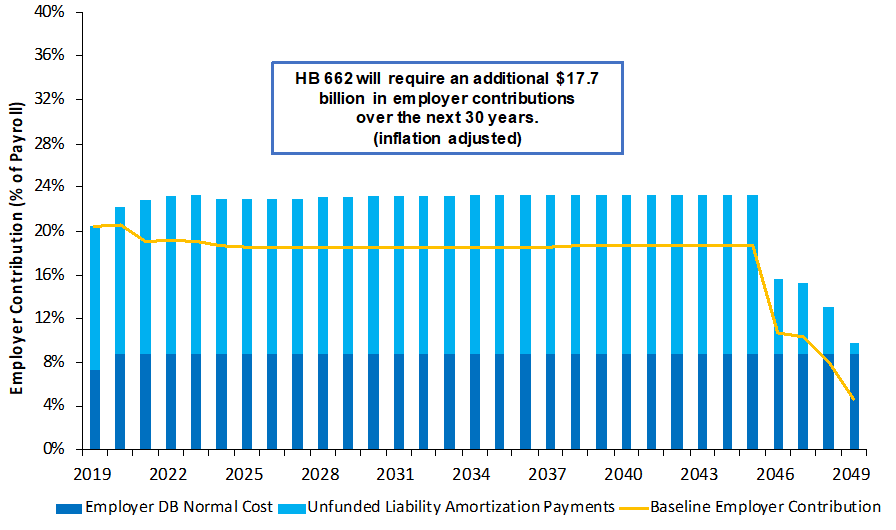 The purpose of HB 667 was to shorten the schedule of pension debt payments by putting all new unfunded liabilities accrued each year on shortened 15-year payment schedules. This would have resulted in paying off legacy unfunded liabilities by 2039, a decade sooner than the currently planned 2049 end date. Much like any other type of debt, unfunded pension liabilities require additional payments that increase the overall cost. The longer the amortization schedule used to pay off pension debt, the higher the long-term cost of servicing that debt. Shortening the timeframe to pay off pension debt reduces the fund’s exposure to this factor,  significantly reducing the ultimate long-term cost to taxpayers. Although the bill would have meant increased near term contribution rates, it would have reduced the total long-term cost by $7 billion over the 30-year timeframe (see Figure 2). 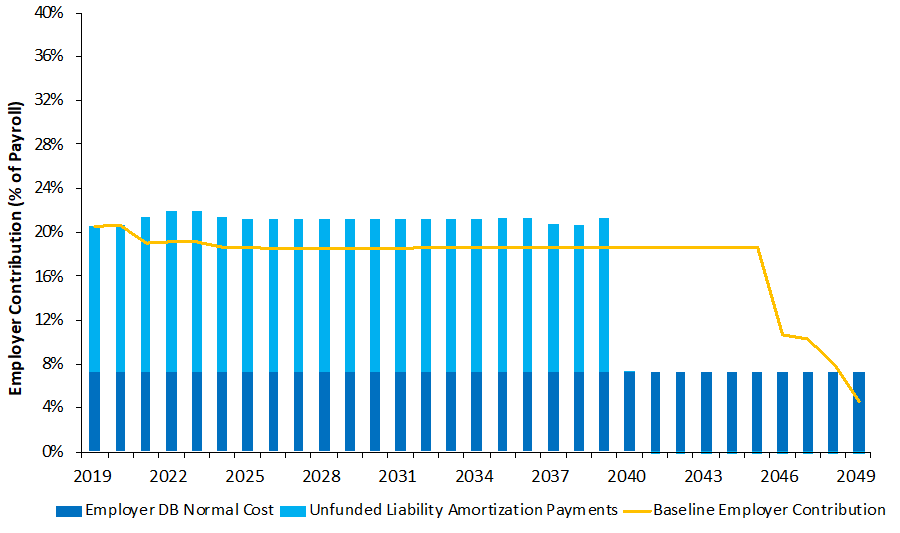 The reform would have significantly improved the system’s ability to keep pension promises. Assuming average market returns match the TRS expectation of 7.25 percent, the legislation would have helped the plan reach fully funded status by 2039. Even if the legislation was enacted, TRS would still face significant risks from an overly optimistic assumption on returns. However, because of the faster debt payment schedule, HB 667 would have improved the predictability of contribution rates in the long-term.

House Bill 109 would not have made any changes for current participants or increased state contributions. Rather, it would have created a new tier of membership in the existing defined benefit plan for individuals hired on or after July 1, 2019. The new tier would offer a cap on pensionable compensation, remove the ability to retire at any age with 30 years of service and increase the allowable employee contribution rate range to 6-10 percent (from 5-6 percent).

Notably, HB 109 did not address the key variables that have contributed to the system’s debt, which were at least partially addressed by HB 662 and HB 667, including underperformance risks associated with the ARR, actual demographic experience not lining up with assumptions, and amortization policies. 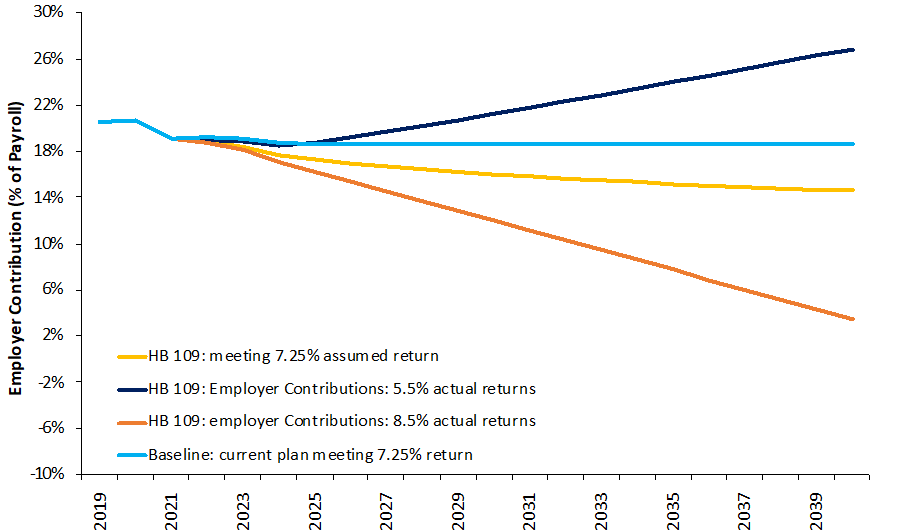 Note: Chart includes all the changes made to asset smoothing and ARR made during 2019-2020 legislative session.

House Bill 830 intended to allow TRS to make changes to its asset allocation by permiting so-called “alternative” investments to increase to as much as 10 percent of the total portfolio share. These types of assets include investments in real estate, private equity, hedge funds and private debt. Alternative investments have been attractive to pension funds in recent years because of the perception that they can “make up” for the growing gap between risk-free interest rates and investment return targets for public pension portfolios. As we have written prior, our modeling suggests that the probability of TRS achieving its target return was somewhere between 10 percent and 31 percent before the onset of the COVID pandemic-driven global market turmoil of early 2020.

In contrast to HB 662, which attempts to de-risk the pension system by lowering the assumed rate of return, HB 830 actually exposes the system to more risk by adding assets that carry significantly more uncertainty.  Although alternative investments can be an attractive addition to the portfolio while the system is in search of higher yields, there are certain complications, such as an inherent difficulty to objectively value alternative assets. Reason colleague Marc Joffe has written: “The reliance on assumptions and judgements for these alternative investments can result in large discrepancies between valuation estimates and true value.” A better alternative is to lower the investment return to reduce the need to chase higher yields.

Though this legislation is not expected to pass, all four bills attempted to elevate the impact of the Teachers Retirement System of Georgia’s solvency crisis. However, whereas HB 662 and HB 667 were targeting some of the main causes of TRS’ $22 billion in pension debt, the other two would have resulted in potentially reducing some marginal costs without solving the key issues that have driven the growth of unfunded liabilities in the first place.

Going forward the legislature needs to adopt a comprehensive approach to achieving fiscal sustainability for TRS. This is for the benefit of the employees and retirees it serves and the taxpayers responsible for covering the spiraling costs of pension debt. This means adopting policies like lowering assumed return assumptions and shortening amortization schedules, which would both pay off existing debt and addresses the sources of debt growth and risk.  Without the necessary changes, further growth in unfunded liabilities and long-term costs jeopardizes retirement security for teachers and crowds out funding for other public services taxpayers rely on.