The coronavirus pandemic and economic downturn have exposed how unrealistic investment return assumptions have plagued public pensions for decades and exacerbated unfunded liabilities in many pension plans across the country. The Pension Integrity Project at Reason Foundation recently released a new tool that allows users to select their state’s pension plan(s) to examine how assets have failed to parallel growth in promised benefits leading up to the current year. It also allows users to preview the potential impact of the current economic downturn on pension assets by selecting various levels of investment returns for the current fiscal year for each plan.

Answering Frequently Asked Questions About Public Pensions During the Pandemic

State legislators are facing new unknowns as the possible recession and state budget challenges during the coronavirus pandemic continue to damage pension plan funding levels. To help state legislators and concerned citizens make sense of these problems, Reason’s Steven Gassenberger answers frequently asked questions, addressing everything from the impact of a stock market downturn on unfunded liabilities to the effects on employee benefits and contribution rates.

Although Colorado reformed the Public Employees’ Retirement Association (PERA) in 2018 to improve funding, pandemic and budget concerns are prompting legislators to consider reversing some of those reforms. For example, to help pay off the pension plan’s unfunded liabilities faster, the 2018 reforms resulted in the state committing to injecting over $200 million annually from the state budget into the pension fund as a supplemental appropriation. Targeting today’s short-term budget challenges, the state’s Joint Budget Committee is now investigating the possible effects of postponing this and other contribution increases. However, as Reason’s Zachary Christensen explains, this could lead to PERA failing to reach full funding within its target date, leading to more funding problems in the future.

As the country works through market losses related to the economic downturn and coronavirus, all public pension plans will suffer losses, but at different degrees. This is due largely to differences in how plan managers and government policymakers have prepared their pension systems to withstand market shocks like the one currently unfolding. In this commentary, Pension Integrity Project analyst Alix Ollivier argues that pension plans should use more cautious actuarial assumptions to ensure resiliency in the market’s volatile and unpredictable future.

Credit rating agencies are closely monitoring how state and cities fund their public pensions, and their evaluations greatly affect a government’s access to fiscal flexibility provided by loans. Reason’s Ryan Frost reports on some of the guidelines one of these agencies, Standard & Poor’s, uses to rate the fiscal health of the government. S&P applies several clear standards (including 100 percent prefunding, a 6.5 percent discount rate, and more) in evaluating state and local pension systems, and their analysis reveals that 58 percent of states are moving backward by not adequately funding their pensions.

After a controversial decision to lease a downtown Austin office for $326,000 each month, the Teacher Retirement System of Texas (TRS) is facing calls to increase transparency. A report by the Texas Sunset Advisory Commission Staff recommends increasing transparency surrounding high-risk, alternative investments. Steven Gassenberger and Marc Joffe of the Pension Integrity Project publicly comment on these proposals, suggesting TRS take notes from other plans like the California State Teachers’ Retirement System (CalSTRS), which has already successfully implemented transparency reforms.

The next potential round of proposed coronavirus stimulus funds was passed by the House but has failed to gain traction in the Senate. The House legislation includes over $2 billion for the Northern Mariana Islands, a U.S. territory. Reason’s Marc Joffe notes that this would amount to nearly $40,000 per island resident, but if used to shore up the troubled pension system it “would be enough to cover all annual payments going forward with some money left over to restore a portion of the benefits lost in 2013.”

S&P on the Future of U.S. Public Pensions After the Sudden-Stop Recession

An S&P Global Ratings brief finds that public pension plans across the U.S. lost approximately $850 billion in the first quarter of 2020. In order to make up for this loss, pension plans would require a nearly 30 percent return in the second quarter of 2020. Due to the inherent difficulties in reaching such a goal, plans may be forced to follow 2008’s example of reducing costs and increasing contributions from employers and employees. The brief can be found here.

Jean-Pierre Aubry, Alicia H. Munnell and Kevin Wandrei at the Center for Retirement Research examine the effect of the market downturn on state and local pension plans and come up with a concerning conclusion: “If plans were to use investment return assumptions that more closely reflect their actual performance since 2001 and use more stringent approaches to amortize unfunded liabilities, the average actuarial contribution in 2020 would rise from 19.7 percent of payroll to 37.6 percent.” This is in line with recent findings by Reason Foundation, which can be seen in our new pension visualization tool and recent risk assessment for the Arkansas Teacher Retirement System. Their paper can be found here.

Prior to the coronavirus pandemic, state and local governments had been steadily increasing annual pension contributions, according to the National Association of State Retirement Administrators’ (NASRA) recent update to its issue brief detailing trends in government pension contributions. The report finds that aggregate contributions to pensions made by government employers increased from $102.9 billion in fiscal year 2017 to $116.7 billion in 2018, up 13.4 percent.” The NASRA brief can be found here.

“The lending rate is virtually zero today and we are paying 3 percent in [the system as a cost-of-living adjustment]. That seems to be something we need to really think about.”

Larry Walther, secretary of the Arkansas Department of Finance and Administration, quoted in “Pension Trustees Look at Options for State System,” Northwest Arkansas Democrat-Gazette, May 1, 2020.

“As economic fallout continues from the COVID-19 pandemic, plan sponsors will likely be keeping an eye on asset classes with delayed performance reporting, such as private equity, and market sectors that may be more vulnerable as the economy restarts.”

Each month we feature a pension-related chart or infographic of interest curated by one of our Pension Integrity Project analysts. This month, Anil Niraula builds a new interactive tool to reveal the impact of COVID-19 on state pension assets and liabilities and look at the history of funding for these plans. 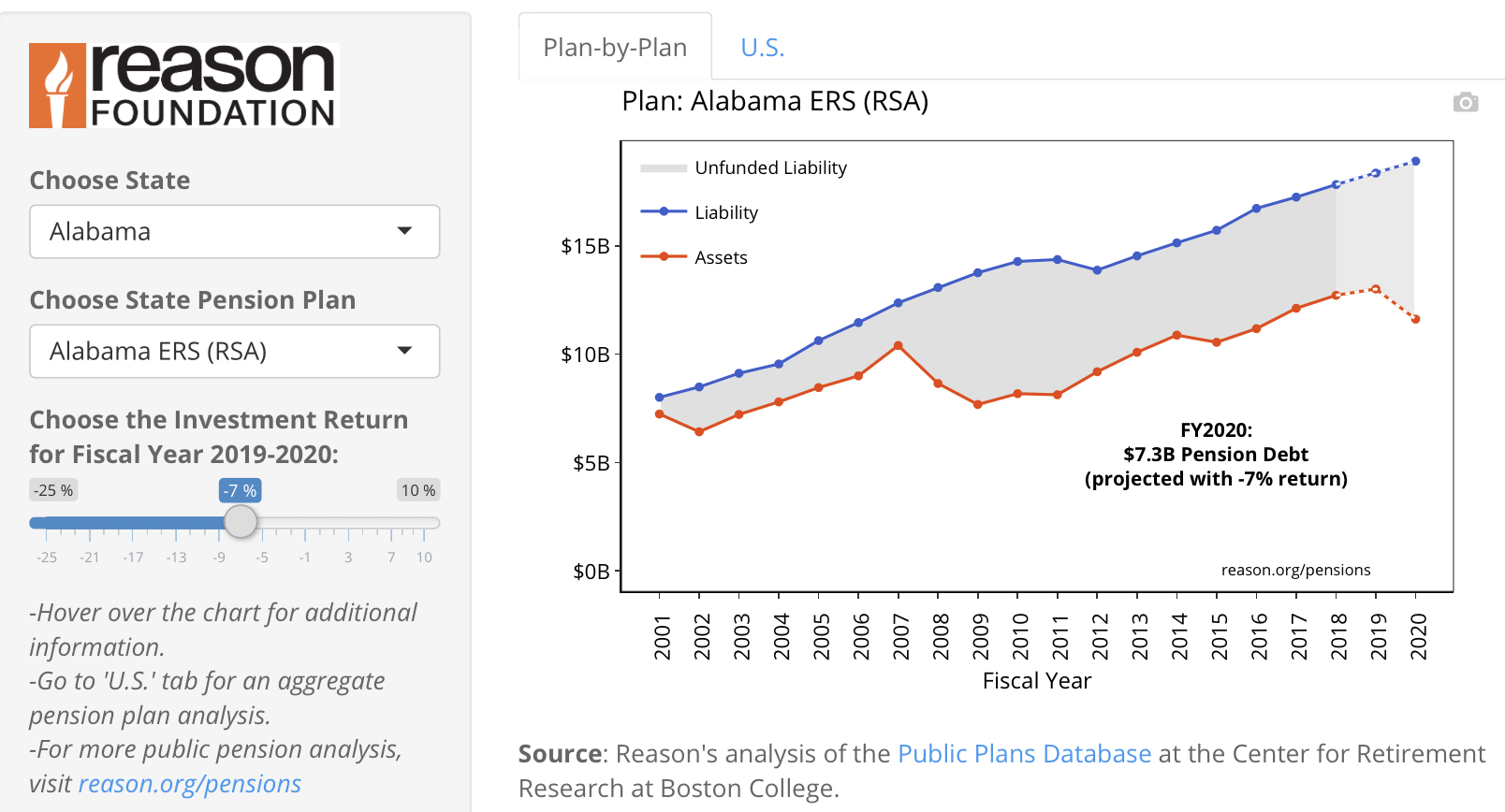