Despite past reforms to the Florida Retirement System (FRS), the pension plan has accumulated $36 billion of public pension debt in the last 12 years. A new solvency analysis by the Pension Integrity Project suggests that this trend is likely to continue unless significant and informed changes are made to the pension plan. To properly execute these reforms, stakeholders need to examine the structural problems creating this debt. This series of one-pagers discusses what is wrong with the retirement system’s plan design and includes an explanation of the two main challenges facing the system—unrealistic investment return expectations and an insufficient defined contribution retirement plan.

A new analysis of the Employees Retirement System of Texas (ERS) explains the causes of the pension plan’s nearly $15 billion in unfunded pension liabilities. The analysis finds that underperforming investment returns have been the biggest contributor to the system’s debt, adding $8.4 billion since 2001. Forecasting of the plan’s next 30 years suggests that debt and underperforming investments are likely to continue to increase the costs of ERS.

The nearly $2 billion in unfunded liabilities accrued by the Montana Teacher Retirement System over the past two decades is putting a strain on schools and taxpayers in the state. Despite undergoing some positive retirement reforms in recent years, the pension plan’s investment returns continue to fall below targets. These underperforming investments have added nearly $900 million in debt to the pension plan since 2002. Without reform, this growing debt will pull more funds from classrooms, teacher pay and other public services.

A state bill currently moving through the Texas legislature, House Bill 2087, proposes to grant mandatory, binding arbitration privileges to the Houston Fire Department. If enacted, this bill could have a profound and lasting impact on the future financial health of the nation’s fourth-largest city and the largest fire department in Texas. Reason’s Ryan Frost and Len Gilroy discuss the major ongoing legal disputes between Houston and its firefighters, showing how this legislation is being discussed during a major inflection point for the city.

Growing unfunded pension liabilities are driving significant increases in annual costs for California schools and taxpayers. Pension debt payments now account for more than half of the money being contributed to the plan by employers each year. This means less of the state’s budget is available for other education programs and priorities. Reason’s Len Gilroy and Zachary Christensen explain how California schools are feeling the squeeze because of these expanding pensions costs.

It is time for policymakers and stakeholders to improve public retirement plans through more creative thinking. According to Reason’s Richard Hiller and Rod Crane, that creative thinking needs to include moving away from the flawed binary of defined benefit versus defined contribution plans. It is time to explore retirement plan designs that incorporate the best elements from both and minimize the weaknesses inherent in each type of plan. Such an approach could strike a better balance between the goals of taxpayers, employers and retirees.

What Is the Value of Annuities?

In a world where employees are increasingly in control of their retirement accounts, annuities stand as a great way to ensure consistent monthly income in retirement. Yet annuities are vastly underused in today’s retirement savings world, according to a new brief by Gal Wettstein, Alicia H. Munnell, Wenliang Hou and Nilufer Gok of the Center for Retirement Research. They find that while few retirees buy annuities due to the costs, the insurance value outweighs this concern once calculated. The brief is available here.

A new database displays commentary and a digital representation of defined contribution plans across the public sector. The database, which was created by the Public Retirement Research Lab, attempts to inform public pension plans on the best design, management, innovation, and legislation practices. Surveying the over 2.3 million public employees in defined contribution plans, they find that those at the age of 60 have a median annual contribution of $1,300, and a median account balance of nearly $32,000. Preliminary findings from the database are available here.

“The [Arizona] PSPRS plans include separate plans for different categories of employees/retirees. Recent PSPRS reforms made changes to cost-of-living adjustments, created a new retirement plan design for new employees and made governance changes, all of which Fitch anticipates will improve long-term plan sustainability. […] [2016 state reforms] established a Tier III hybrid benefit structure for new hires, closed Tiers I and II, and required the amortization of legacy unfunded liabilities over 20 years, among other changes, which Fitch views as improving the sustainability of the plans over time.”

—Fitch Ratings, in commentary on Coconino County’s forthcoming issuance of taxable, pledged revenue bonds to pay down most or all of their unfunded PSPRS liabilities, March 24, 2021

“Across the United States, we are in the midst of a national public pension crisis. Local and state governments struggle to provide much-deserved pensions to retirees, and at the same time deliver critical services to current residents and businesses.”

“For several years, the 3% [cost-of-living adjustment for retirement benefits] APERS has been paying more than the actual increase in the cost of living each year. That’s not healthy for the defined benefit plan, but nobody wanted to give up a benefit, so we are proposing it to begin with new hires.”

Each month we feature a pension-related chart or infographic of interest generated by one of our Pension Integrity Project analysts. This month, Quantitative Analyst Jordan Campbell shows how the Florida Retirement System funding will look if the plan’s investment performance matches its performance over the last two decades. Read more about the tool here. 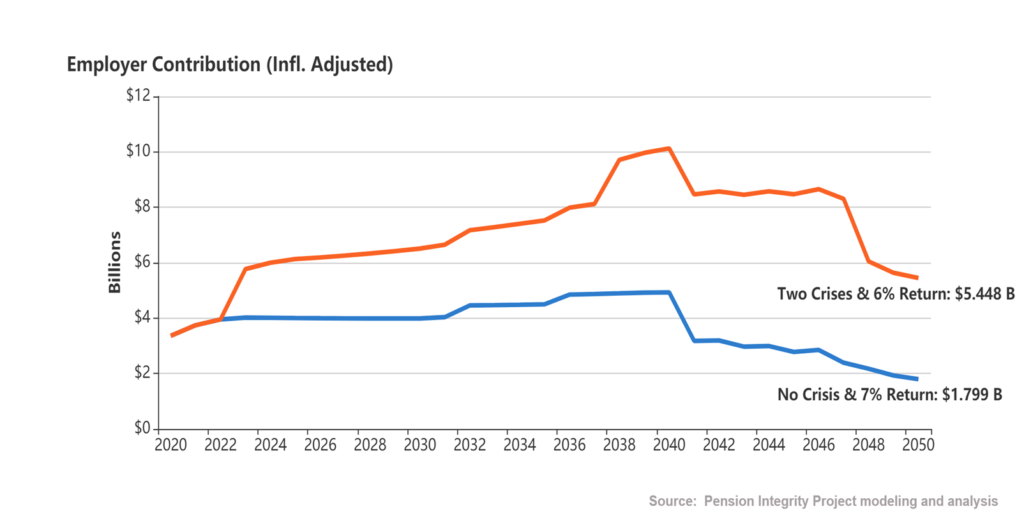