Earlier this month New Mexico Gov. Michelle Lujan Grisham signed into law Senate Bill 72, bipartisan legislation designed to begin tackling the Public Employees Retirement Association’s (PERA’s) solvency challenges through benefit design changes and increased annual contributions. Facing over $6.7 billion in pension debt, state lawmakers found a way to build a bipartisan consensus between labor associations, PERA’s governing board, local governments, and other stakeholders. In this analysis, members of the Pension Integrity Project evaluate the changes and use actuarial modeling to forecast the long-term results of the reform. The analysis suggests that SB 72 represents a giant leap forward in reducing the risk of rising costs in the future, but additional work remains to get the pension plan fully on track to meet what appears to be a darkening market forecast. Additionally, Reason Foundation’s Anil Niraula examines why Moody’s recently found New Mexico’s pension reform bill “will reduce state and participating local governments’ unfunded pension liabilities and susceptibility to investment return volatility.”

As they’ve chased increasingly unrealistic assumed rates of return, many public pension funds have transitioned their investment strategy over the past decade, swapping relatively stable and transparent public equity and fixed income investments for less transparent and more volatile so-called “alternative” assets in search of higher yields. This trend is most apparent in the increased allocation in alternative investments, such as private equity. In this commentary, Reason’s Marc Joffe warns that some “private equity fund managers exaggerate the reported net asset value of their funds” and that crises like the coronavirus pandemic could cause additional instability for public pension funds that are too reliant on private equity.

While some of Arizona municipalities are having difficulties budgeting for public services and others are seeking ways to pay down pension debt faster, a common theme uniting them all is the dramatic increase in pension costs over the past two decades. In a series of briefs, Reason’s Zachary Christensen examines the primary drivers behind rising pension costs and the fiscal impacts of pension plan underperformance for a subset of Arizona’s cities and counties, including Maricopa County, Scottsdale, Tempe, Mesa, and more.

Market volatility associated with COVID-19 developments is likely to put even more budget pressures on school districts, many of which are already facing significant increases in pension costs. A recent report from California’s Legislative Analyst’s Office, as summarized by Reason’s Alix Ollivier, suggests that the state should dedicate some of its budget surplus to alleviate CalSTRS unfunded liabilities to help reduce costs imposed on school districts. The report also proposes a restructuring of health benefits to slow the growth of pension debt.

The Kansas Public Employee’s Retirement System (KPERS) has only 64 cents saved for every dollar needed to pay for retirement benefit promises. This relatively low funded ratio makes Gov. Laura Kelly’s recent proposal to reduce state contributions to KPERS problematic. In order to fund the budget, Gov. Kelly would like to refinance the pension plan’s debt and allow the state to extend payments out further into the future in exchange for smaller pension contributions in the short run. Reason’s Ryan Frost and Michael Austin from the Kansas Policy Institute examine the potential downsides of pension debt re-amortization, warning the legislature to cautiously approach this element of the budget proposal.

In response to growing concerns associated with long-term pension security, Massachusetts Gov. Charlie Baker has proposed a prudent increase in annual employer contributions into the state’s Public Employee Retirement Administration Commission (PERAC). As Reason’s Raheem Williams explains, the proposed payment increases are much needed to help the severely underfunded pension plan, but reforms would need to reach beyond contributions to fully pull PERAC out of its current funding challenges.

The quantitative analyst will work with the Pension Integrity Project team to develop actuarially-driven analysis of public sector pension plans. For more details on the position, please see the job posting here.

While the primary focus of pension funds usually gravitates around maintaining adequate funding levels and ensuring responsible investments, one often overlooked, yet important, element of pension management are the fees applied to private equity investments. These fees can vary greatly and make a significant difference in overall costs for a fund. In a new paper, Juliane Begenau of Stanford’s Graduate School of Business and Emil Siriwardane of Harvard Business School examine fees paid by pension investors into various private equity funds. They find that fees are at most modestly affected by systemic factors such as pension total liabilities or governance structure. The authors conclude that the differences between the fees paid by pension plans could vary by up to 15 percent, even among similar plans investing in the same private equity funds.

Several pension reform efforts in New York have generally preserved the benefits of existing teachers while adjusting the benefits of new workers. This has resulted in multiple tiers of workers, all with varying levels of retirement benefits. In this new report, TeacherPensions.org uses benefit modeling to examine the adequacy of New York’s various pension tiers. They find that some tiers are falling short in providing adequate retirement benefits and that this shortcoming can be mitigated with increased contributions to the tax-deferred annuity program.

“By paying out more than it was taking in, PERA was on a path to eventual bankruptcy. Now we’ve reversed course, and I’m confident New Mexico can keep its promises to current and future retirees. […] Legislators from both parties recognized the dire need for this reform, and I thank them for their leadership.”
—Michelle Lujan Grisham, governor of New Mexico, quoted in “Gov. Lujan Grisham signs retirement security measure into law”, March 2, 2020.

“The solutions in this bill will go far to get our retirement system back on track while protecting our most vulnerable retirees from any hardship. […] It’s never easy making changes. A downturn is inevitable and we’ve taken the right steps to guard against it. We’re watching after everyone’s future and safeguarding the state’s bond rating.”
—George Muñoz, New Mexico state senator, quoted in “Gov. Lujan Grisham signs retirement security measure into law”, March 2, 2020.

“The Office of Retirement Services’ failure to follow state law would have resulted in chronic underfunding of the retirement system. Failing to address a broken pension system is no different than robbing the next generation of its wealth and spending it today. This is both unsustainable and unfair to our kids who will eventually foot the bill.”
—Thomas Albert, Michigan state representative, quoted in “State representative spars with Whitmer administration over school pension assumptions”, The Center Square, Feb. 25, 2020.

Each month, we feature a pension-related chart or infographic of interest curated by one of our Pension Integrity Project analysts. This month, Reason’s Truong Bui displays assumed rates of return for state pension plans over time. The full chart, featuring all 50 states, is here. 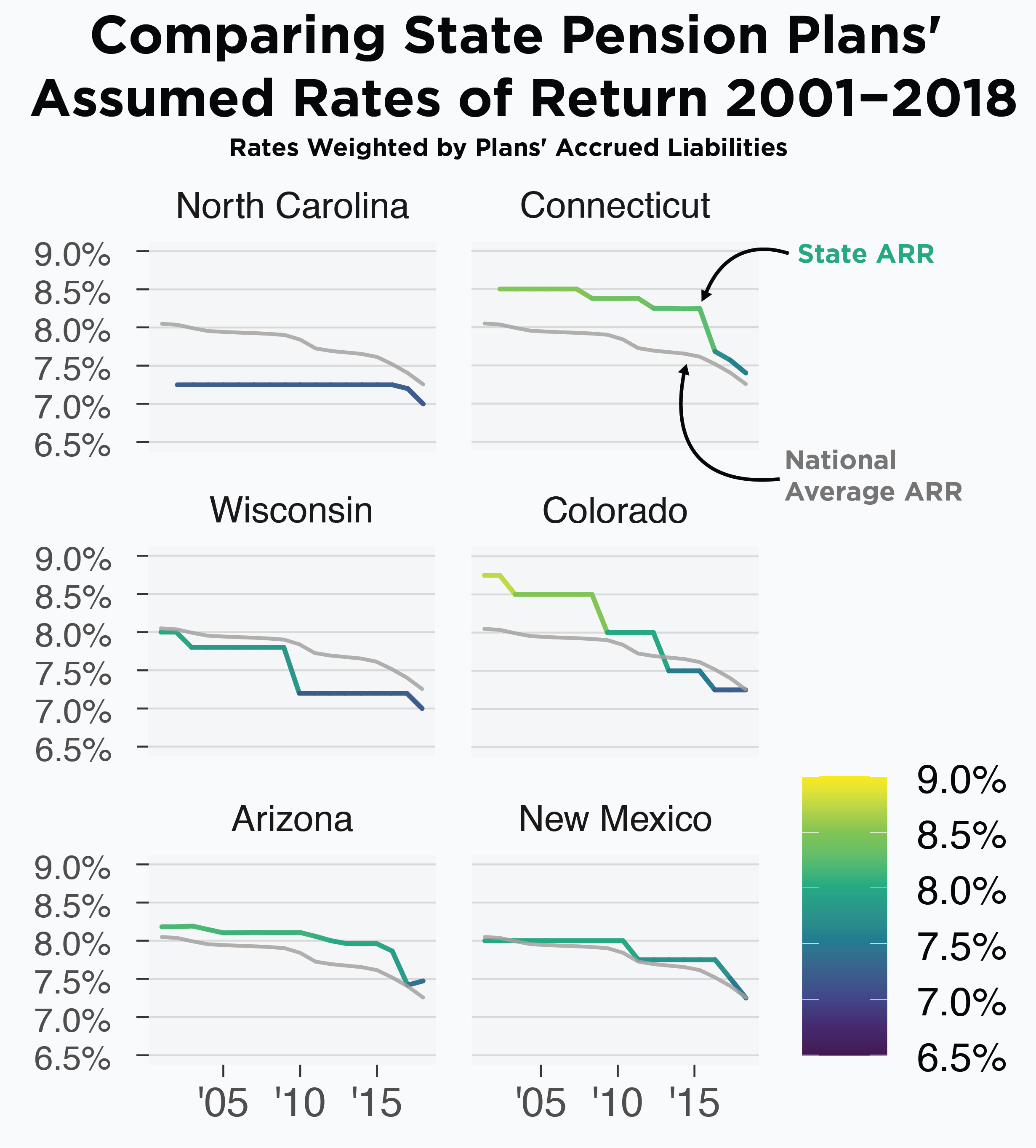 Follow the discussion on pensions and other governmental reforms at Reason Foundation’s website and on Twitter @ReasonPensions. As we continually strive to improve the publication, please feel free to send your questions, comments and suggestions to alix.ollivier@reason.org