The pension reforms Colorado made in 2018 have put the state on track to have its Public Employee Retirement Association (PERA) fully funded in 30 years—a position that, unfortunately, many other public pension plans across the country are not in. A new Pension Integrity Project policy brief by Zachary Christensen compares how PERA would be able to respond to economic and market turbulence before and after the reforms implemented via Senate Bill 200 of 2018. The study shows that after the reforms, PERA is in a much-improved position to handle the current and future market shocks, due largely to the introduction of automatic adjustments. Colorado’s reform efforts can be a useful example for other pension plans across the country that need to make changes to adapt to the new economic and investment environment.

Since 2001, unfunded liabilities for the Teacher Retirement System of Texas (TRS) have grown by more than $50 billion. Over the same time period, unfunded liabilities for the Employees Retirement System of Texas (ERS) have grown by nearly $12 billion, resulting in ERS’ funded ratio falling from 105 percent to 70.5 percent. What’s more, Texas has reached its constitutionally set cap on annual contributions for ERS and is quickly approaching this limit for TRS. Achieving unrealistically high investment return targets in an increasingly volatile market—a strategy that failed to prevent growing pension debt despite a decade-long historic run-up in the market—is unlikely to be the savior of the retirement systems now. New analysis of TRS and ERS by the Pension Integrity Project examines the factors behind this recent growth in unfunded liabilities and suggests reforms Texas can use to close the funding gaps, including strategies to pay down pension debt faster, adopt more prudent actuarial assumptions and build more resilient and financially sustainable retirement systems for the future.

In 2018, nearly a third of state funding for the Detroit Public Schools district went to its pension plan, the Michigan Public School Employees Retirement System (MPSERS). Returns that deviated from assumptions and missed payments have created over $40 billion in unfunded liabilities, debt that crowds out other school spending each year. While the normal cost per pupil (the cost of actual retirement benefits earned that year) was $252 in 2018, Detroit schools paid $2,202 per student for MPERS Debt, implying that each student would have an additional $1800 of funding if the plan had been fully-funded. Reason’s Truong Bui, Marc Joffe and Leonard Gilroy have created a data visualization of the cost of Michigan’s public-school pension debt on a per-student basis, which allows the viewer to compare funding and contribution numbers between districts in the state.

As a result of a 2016 pension reform effort, the Arizona Public Safety Retirement System (PSPRS) is on track to sustainable financial sustainability. The reform, for which the Pension Integrity Project played a major technical assistance and stakeholder engagement role, provided increased retirement security, lowered costs for employers and taxpayers, and provided new retirement choices to allow new public safety personnel to better match an evolving set of worker preferences. In this newly published analysis, Reason’s analysts examine the effects of Arizona’s 2016 reforms and identify the challenges that remain for PSPRS.

As the national conversation on the role of policing continues, Reason’s Richard Hiller notes the need to rethink police retirement plans as the profession evolves. Due to a variety of factors, law enforcement officers tend to join and retire at younger ages, often around the age of 50 or 55. Despite the relatively early retirement, vesting periods for pension benefits guarantee that many officers may not even meet their goals. For example, Arizona’s plan for public safety workers showed only 54 percent of new hires remaining in service after five years, when they would vest in their pension benefit, which encouraged stakeholders to establish more plan options to fit the need of more public servants. Hiller urges policymakers to adapt pension plans to better account for the increased mobility in the workforce.

Transit Agencies Have At Least $49 Billion in Retirement Debt

While pension funds have been engaged in social investing for decades, the rise of environmental, social, and governance (ESG) investing has prompted the Department of Labor to set clear guidelines for fiduciaries. Jean-Pierre Aubry, Anqi Chen, Patrick M. Hubbard and Alicia H. Munnell of the Center for Retirement Research (CRR) have examined the impact of ESG investing in a new research brief and found that any form of social investing is not appropriate for public pension funds. Because ESG investing lowers potential investment returns and has an unclear effect in achieving its social goals, the report recommends against plans swapping to this framework. The brief is available here.

With 2020 financial reports now available for most public pension plans, Jean-Pierre Aubry of the Center for Retirement Research compiled an overview of the impact of COVID-19 on plan performance so far, finding that most plans fell below actuarial expectations. According to the report, while in 2019 plans outperformed their average assumed return of 7.2 percent with an average return of 8.9 percent, the average 2020 return was just 5.8 percent. The brief argues that plans may need to hold U.S. Treasuries, which rise in value during market shocks and can be easily liquidated if needed to pay contributions. The brief is available here.

Impact of COVID-19 on Pension Plan Actuarial Experience and Assumptions, Including Mortality

COVID-19 has been responsible for over 225,000 deaths in the US so far. As a result, the American Academy of Actuaries has released a brief detailing the changes that the pandemic has posed to actuarial assumptions, including mortality tables. Due to the advanced age of most COVID-19 victims, the pandemic’s effect on mortality appears unlikely to have a significant impact on unfunded liabilities for most public pension plans. “While the excess mortality associated with the pandemic could have an impact on certain plans, other workforce demographic and economic implications appear to be far more financially significant,” the report finds. The brief is available here.

“My point here is not to deprive current retirees of benefits they were promised or to take away benefits already earned by current employees. But it’s time for honest, independent assessments of the long-held assumptions that investment returns can be sufficient to fund COLAs indefinitely while also paying off today’s combined trillion-dollar unfunded liabilities.”
— Girard Miller, finance columnist, writing in “Public Pensions’ New Inflation Dilemma,” Governing, Sept. 15, 2020

“One of the issues you have is the liability can change. So even if you issue pension obligation bonds, there’s always a chance that those divisions don’t stay at 100 percent funded. That’s when problems arise. That’s when you suddenly have the bond payment and the pension payment.”
— Dean Bott, Grand Traverse County finance director, quoted in “Grand Traverse Pavilions Seeks Bonds to Cover Pension Debt,” Record Eagle, Oct. 4, 2020

“Private equity isn’t my favorite asset class. It helps us achieve our 7 percent solution. I know we have to be there. I wish we were 100 percent funded. Then, maybe we wouldn’t.”
—Theresa Taylor, chair of CalPERS board’s investment committee, quoted in “Marching Orders for the Next Investment Chief of CalPERS: More Private Equity,” The New York Times, Oct. 19, 2020

Each month we feature a pension-related chart or infographic of interest curated by one of our Pension Integrity Project analysts. This month, Quantitative Analyst Anil Niraula visualizes the changes in funded status for state pension plans across the nation. Use or read more about the tool here. 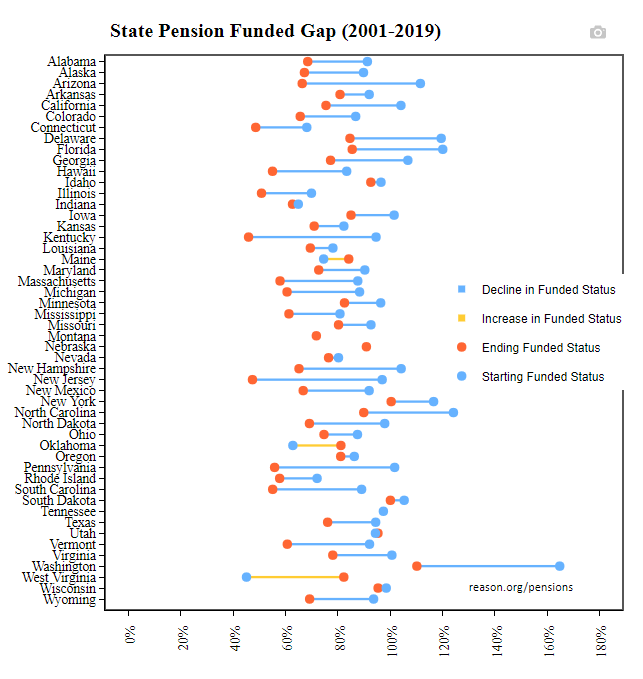