Arguably more notable than the reform itself is the process used to achieve stakeholder consensus on the reform package, as it avoided the adversarial dynamic of pension reform policy debates that typically pit employers/taxpayers against employees and labor interests. In the case of PSPRS, the legislation-a package of three bills sponsored by State Sen. Debbie Lesko-was the result of a year-long, collaborative stakeholder process launched by Lesko and Senate President Andy Biggs that garnered extensive support from public safety associations and many other stakeholders in the government and business community.

The legislation had strong bipartisan support, passing the Senate unanimously and the House of Representatives overwhelmingly, with a 49-10 vote.

Reason Foundation was a key player from the beginning of the process, with its Pension Integrity Project team providing education, policy options, and actuarial analysis for all stakeholders. We also facilitated the development of consensus among stakeholders on the conceptual design and framework of the reform. Further, more than once we resorted to shuttle diplomacy to keep stakeholder parties at the table when negotiations became difficult or threatened to break down.

Arizona’s public safety associations-led by the Professional Fire Fighters of Arizona, the state lodge of the Fraternal Order of Police, and the Phoenix Law Enforcement Association-also deserve major credit for recognizing the need for reform early on and proactively bringing reform ideas to the table that ultimately led to the launch of the stakeholder collaboration process.

Conservative legislators, public safety unions, and a libertarian think tank may seem like strange bedfellows when it comes to forging an agreement on a precedent-setting pension reform affecting law enforcement and fire personnel, but the ultimate success of the effort suggests that a collaborative process may be just the recipe needed to achieve reform on such a complex and intractable issue. Arizona Republic editorial board member and columnist Robert Robb recently described this reform effort as “a paradigm-buster,” adding that, “public employee unions and libertarian wonks blazed new ground on a difficult and emotional topic that is producing paralysis around the country.”

The Need for Reform 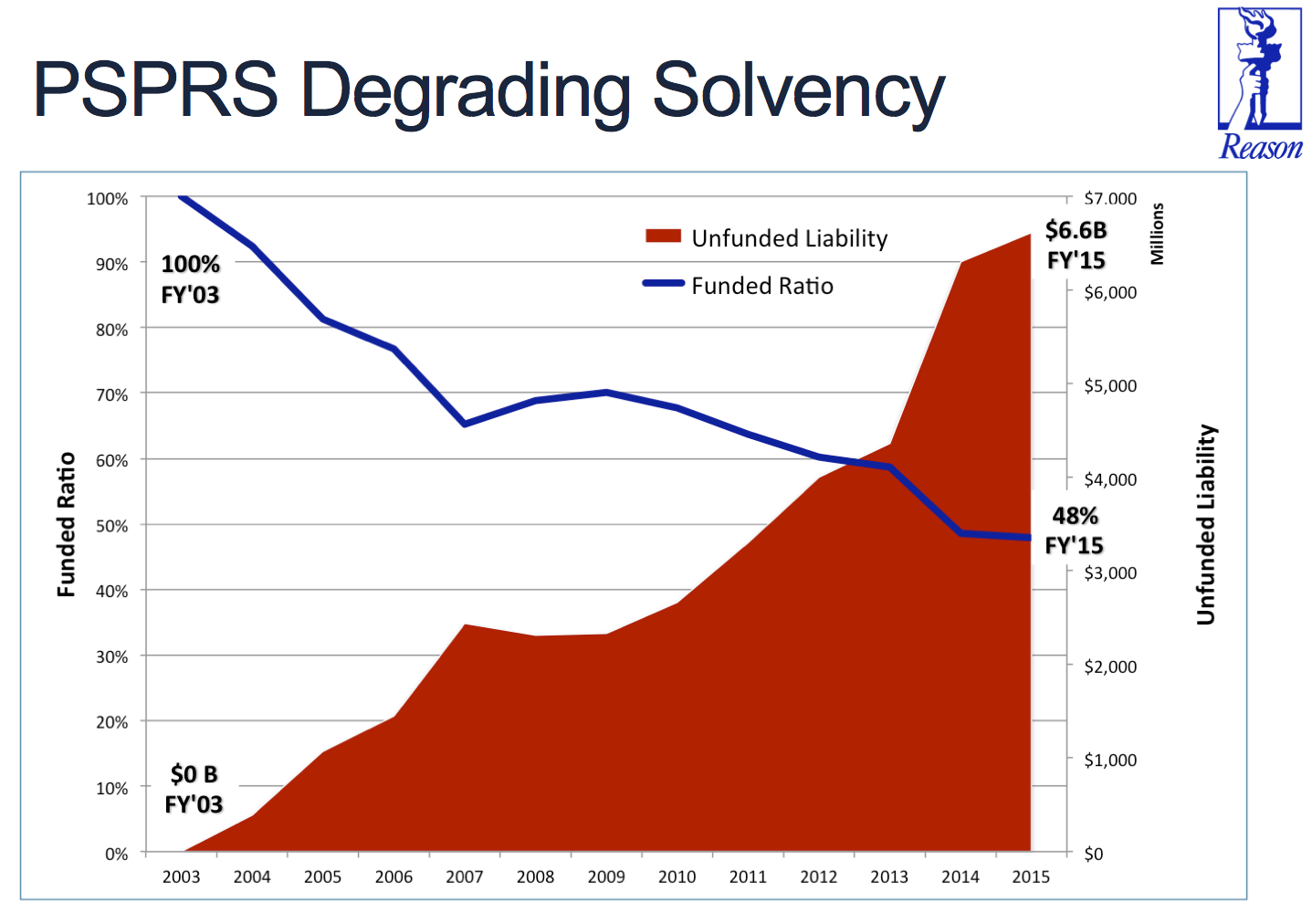 The deterioration of PSPRS’s financial health over the past 12 years has led to skyrocketing annual pension costs for the local government and state agency employers participating in PSPRS and, by extension, taxpayers. Specifically, the growing costs for many local governments are attributable to rising payments on the large unfunded liabilities for public safety pension benefits. The growth of these pension debt payments has threatened the continued delivery of public services and budgets in those jurisdictions, since the growing costs of pensions effectively crowd out other areas of the budget. Further, the courts have struck down previous legislative reforms to PSPRS enacted in recent years, and other reforms remain under litigation, creating the need for a new solution.

The PBI mechanism-which is intended to adjust benefit levels for retirees upward over time to partially offset inflation-has undermined PSPRS’s solvency by skimming assets off the top of the fund in years of good market performance. Among the problems associated with the PBI: 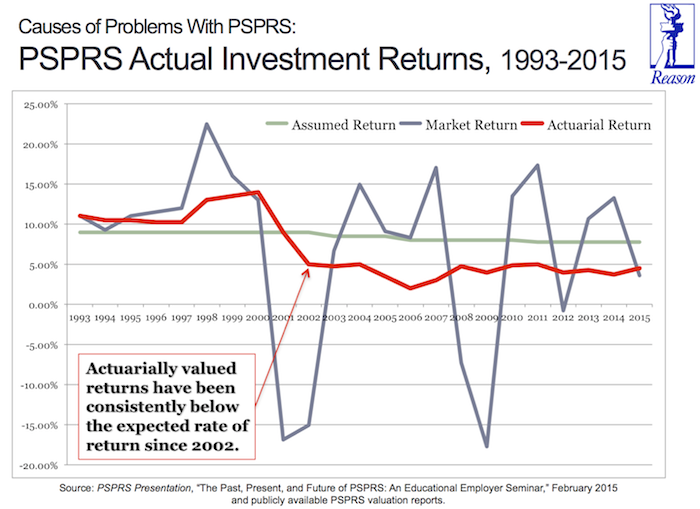 In addition to the PBI problem, PSPRS has seen underperforming investment returns relative to its expected rate of return. The historic trend of actuarially valued returns have been 5% or less since 2002, nearly 15 years straight. However, during that time PSPRS has been using an unrealistic expected rate of return, ranging from 8% down to the recently adopted 7.5%. The net result has been unfunded liabilities added every year for the past dozen years.

The PSPRS reform effort sought to establish a retirement system that is affordable, sustainable, and secure. The primary goals of reform included:

The PSPRS reform includes a wide range of elements, summarized in this section, that affect current workers, retirees and future workers alike. (Links to additional materials with more details on the reform are listed at the end of this article.)

First, for current employees and retirees, the reform will replace the uncertain, inequitable, unsustainable PBI with a traditional, pre-funded cost of living adjustment (COLA) that provides certainty and equity in retirement. This will serve the public interest by fixing the broken PBI mechanism that has been a major factor causing increased unfunded liabilities:

Replacing the PBI with a traditional COLA for current personnel and retirees will require a constitutional amendment that will require voter approval at the ballot box in an election this May.

Second, the reform creates an entirely new retirement plan design for all new employees hired on or after July 1, 2017 that will:

Both the process and the content of the PSPRS reform offer models to other jurisdictions on how to approach meaningful pension reform. With regard to process, the Arizona PSPRS reform experience demonstrates that stakeholders with very different interests and perspectives can come together to achieve a consensus agreement on a very difficult issue that has vexed many other policymakers elsewhere.

And this example shows that consensus need not be tepid; it can produce substantive, wide-ranging and meaningful reform that will reduce taxpayer and pension system exposure to financial risk and market risk, reduce long-term costs for employers/taxpayers and employees, and stabilize contribution rates for both employers and employees. The reform will also ensure retirement security for all employees (current and future) and retirees, while ensuring state and local governments’ ability to recruit and retain 21st century public safety employees.