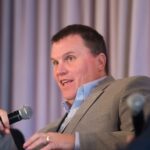 Moore leads Reason's policy implementation efforts and conducts his own research on topics such as privatization, government and regulatory reform, air quality, transportation and urban growth, prisons and utilities.

Moore, who has testified before Congress on several occasions, regularly advises federal, state and local officials on ways to streamline government and reduce costs.

Mr. Moore is co-author of the book Mobility First: A New Vision for Transportation in a Globally Competitive 21st Century (Rowman & Littlefield, 2008). Texas Gov. Rick Perry said, "Speaking from our experiences in Texas, Sam Staley and Adrian Moore get it right in Mobility First." World Bank urban planner Alain Bartaud called it "a must read for urban managers of large cities in the United States and around the world."

Moore is also co-author of Curb Rights: A Foundation for Free Enterprise in Urban Transit, published in 1997 by the Brookings Institution Press, as well as dozens of policy studies. His work has been published in the Wall Street Journal, Los Angeles Times, Boston Globe, Houston Chronicle, Atlanta Journal-Constitution, Orange County Register, as well as in, Public Policy and Management, Transportation Research Part A, Urban Affairs Review, Economic Affairs, and numerous other publications.

In 2002, Moore was awarded a World Outsourcing Achievement Award by PricewaterhouseCoopers and Michael F. Corbett & Associates Ltd. for his work showing governments how to use public-private partnerships and the private sector to save taxpayer money and improve the efficiency of their agencies.

Prior to joining Reason, Moore served 10 years in the Army on active duty and reserves. As an noncommissioned officer he was accepted to Officers Candidate School and commissioned as an Infantry officer. He served in posts in the United States and Germany and left the military as a Captain after commanding a Heavy Material Supply company.