A mileage-based user fee, which is sometimes called a road-user charge, is the idea of charging road users based on the distance they drive rather than a per-gallon gas tax. Mileage-based user fees are being tested in various pilot projects, and in limited cases until the technology, system designs, and cost issues can ve developed and resolved.

Why Use Mileage-Based User Fees?

User fees are the best way to fund transportation infrastructure. The advantages of user fees include:

User fees improve the utilization, capacity, and operational efficiency of transportation facilities and services. They are also popular with users who experience the value transaction and allow for the reality of variation in preferences.

In contrast, general revenue funding for transportation infrastructure treats all users as identical and provides none of the operational benefits.

For several decades, the fuel tax was a successful user fee even though it is indirect and has been opaque to most payers. But its days are numbered. For an increasing number of vehicles, the connection between road use and fuel use is breaking down due to the rising fuel economy of new vehicles and the increasing number of hybrid and electric vehicles that consume little to no gasoline. Taking those trends into account, forecasts by state transportation agencies show rapidly declining gas tax revenues per mile of road use (Figure 1). 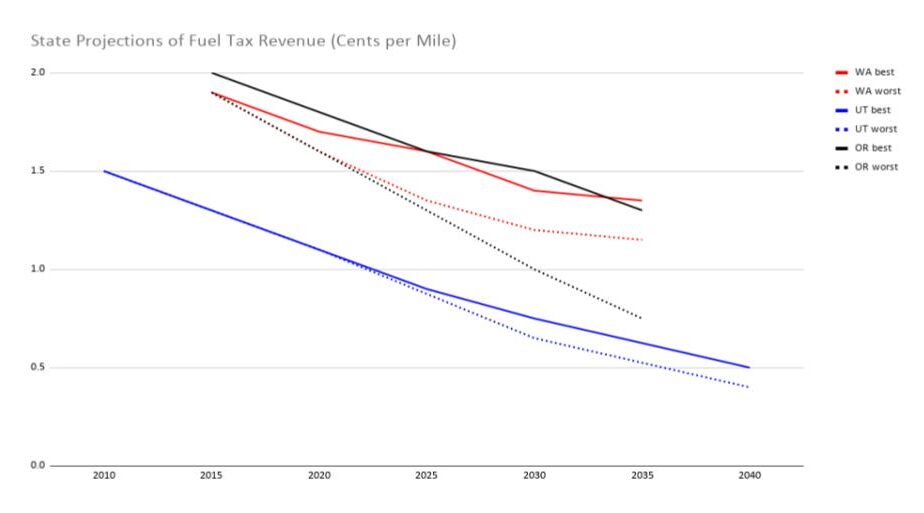 What Is Being Done With Mileage-Based User Fees?

Replacing fuel taxes with distance-based user fees is being tested and tried in the U.S. and overseas.

New Zealand and Germany have a distance-based fee for trucks, and Australia and several European countries are testing their application to passenger vehicles.

In the U.S., states have been testing mileage-based user fees for over a decade. And six years ago, the FAST Act created the Surface Transportation System Funding Alternatives (STSFA) Program, which has given federal grants to states to accelerate testing of mileage-based fees. Since then:

The pilot projects have begun building an extensive base of knowledge about mileage-based fees and what it would take to implement them. This ranges from technical viability to interoperability and public acceptance, but also equity and privacy concerns, among many others.

The Main Issues With MBUFs

There are several key issues that the state pilot programs testing mileage-based user fees are grappling with.

It’s a new user fee. Pilot programs are testing mileage-based fees as a replacement for the fuel tax, not as a new additional charge to drivers. This is important and alleviates understandable concerns about double-taxation.

Technology is capable and changing fast and states must adapt. A number of technologies are capable of measuring road use accurately and assessing road usage charges. The technology, however, is changing and improving rapidly, so these mileage-based user fee systems need to accommodate technological changes, especially as vehicle manufacturers build them into care as original equipment.

Costs need to be lowered. Currently, the cost to collect mileage-based user fees is appreciably higher than for collecting fuel taxes, but the cost does appear to come down with increased scale. Pilot projects are increasingly exploring how to reduce the collection costs.

Equity for lower-income users. All user fees are levied according to use, not according to income or wealth, so they tend to be regressive. A mileage fee is no more regressive than a fuel tax, so the shift in user fees will not reduce, or increase, the regressive nature of the main transportation user fee. Given the many advantages that user fees have over general taxes, the best way to address this problem is to provide appropriate assistance, as we do with food via food stamps and with water and phone services with lifeline rates, which help low-income families and individuals pay the costs of basic services. In addition, mileage-based fee systems need to be designed in ways to make it easy for lower-income drivers to pay, which means they should not require credit cards or large lump-sum payments.

Fairness for rural drivers. Contrary to the concerns of rural communities, mileage-based user fees are better for rural drivers. Rural residents are often without public transportation options and make long commutes and trips so they already pay more user fees than urban residents in the form of fuel taxes because it takes more fuel to travel further. This is amplified if drivers have vehicles with below-average fuel economy, as is the case for many rural residents. Shifting to a mileage-based fee would change that by taking away the rural penalty from their less fuel-efficient vehicles. Indeed, research by RAND Corporation and by the states of Oregon, Washington, and North Carolina, found that rural drivers benefit from a shift to mileage-based fees and would pay slightly less compared to traditional fuel taxes. This is appropriate because rural roads also tend to be less expensive to build and maintain than urban ones. 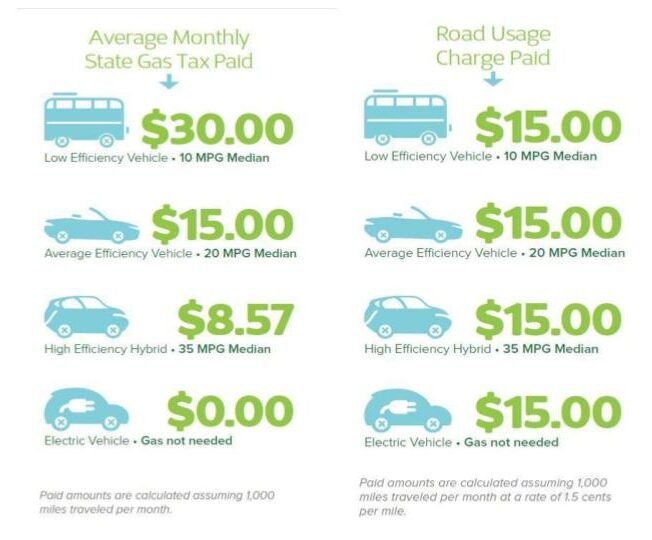 Credit and Source: ITS International, 2017.

MBUFs don’t discourage the purchase of electric vehicles. Individuals buying electric cars will avoid paying (right now) $2.90 per gallon for gas, of which, on average, $0.35 is fuel taxes. So asking electric car drivers to pay a fee for the roads they use is both reasonable and a very small portion of the financial impact of their switch to electric propulsion. States that have imposed road usage charges on electric vehicles report no discernable changes in trends of electric vehicle adoption.

Next Steps for Mileage-Based User Fees

In the short run, mileage-based fees do not address transportation funding needs. Investing in road usage charge pilot programs is an investment in developing a necessary long-term replacement for fuel taxes. It is important to continue state pilot programs, to look to expand their scale and scope, and start to address the tougher transition issues.

At the same time, Congress is currently discussing a possible national mileage-based user fee pilot program as part of the next surface transportation reauthorization bill. That could be helpful if it is well designed and executed because it would allow for larger scale and more extensive testing. A national pilot program should build on the experience of the states, the lessons they have learned, and include those currently undertaking state pilot programs.

We recommend that any mileage-based user fee program be based on the following principles: