In 2002, the Arizona State Retirement System was $1 billion overfunded and on track to provide the retirement benefits that had been promised to state and municipal employees as well as educators. Just 20 years later, the Arizona State Retirement System has over $15.9 billion in unfunded pension liabilities and has fallen deeper into debt each year since 2014.

Our latest analysis of the Arizona State Retirement System (ASRS), updated December 2020, shows that costs for the system could potentially rise by almost $20 billion under some bad market scenarios. Additionally, the findings reveal how the past two decades of underperforming investment returns, interest on pension debt, and inaccurate actuarial assumptions have driven pension debt ever higher, resulting in diverting more and more funding away from Arizona classrooms and other public priorities each year.

One such finding is that overly optimistic investment return assumptions have been the biggest contributor to ASRS debt—adding over $10 billion in debt since 2002.

Not only does Reason Foundation’s latest solvency analysis examine the factors driving the growth of ASRS’ unfunded liabilities, but it also presents a stress-test analysis to measure the impacts that future market scenarios could have on unfunded liabilities and required employer contributions.

The findings show that ASRS has less than a 50 percent chance of meeting its set expected rate of return, and if it does not the system will fall even further behind. The growth of the public pension system’s debt can be seen in the chart below, which is pulled from the full solvency analysis.

With only 72.8 percent of needed assets on hand today, this underfunding not only puts taxpayers and public servants equally on the hook for servicing ballooning pension debt (the costs of which have increased massively since the early 2000s) but also undermines both the salary growth and retirement security needs of a significant portion of the workforce, particularly younger Arizona educators and state employees.

ASRS actuaries have historically used an 8% assumed rate of return to calculate benefit cost to members and employers despite significant market changes, only lowering the rate to 7.5% in 2018. • Average long-term portfolio returns have not matched long-term assumptions over different periods of time:

Note: past performance is not the best measure of future performance, but it does help provide some context to the problem created by having an excessively high assumed rate of return.

The “new normal” for institutional investing suggests that achieving even a 6% average rate of return in the future is optimistic.

If you assume ASRS will achieve an average six percent rate of investment return over the next 30 years plus experience one financial crisis in this time, analysis shows that the pension plans unfunded liability would equal $6.8 billion in the year 2050. Currently, the state assumes that the plan’s unfunded liabilities would be totally paid off by 2050.

This likely economic scenario would cost the state over $20 billion more in pension contributions than what they currently plan to spend on the plan.

Seeing as ASRS only averaged a 5.87 percent market valued investment return rate between 2000 – 2019, and that we have seen two major economic crises in the last 20 years, it is reasonable to assume the next 30 years will look somewhat similar.

An additional $20 billion in pension costs would put significant strain on the state budget.

What is level percent of payroll amortization?

What does amortizing unfunded liabilities using a layered-base approach mean?

What does a long amortization period mean? 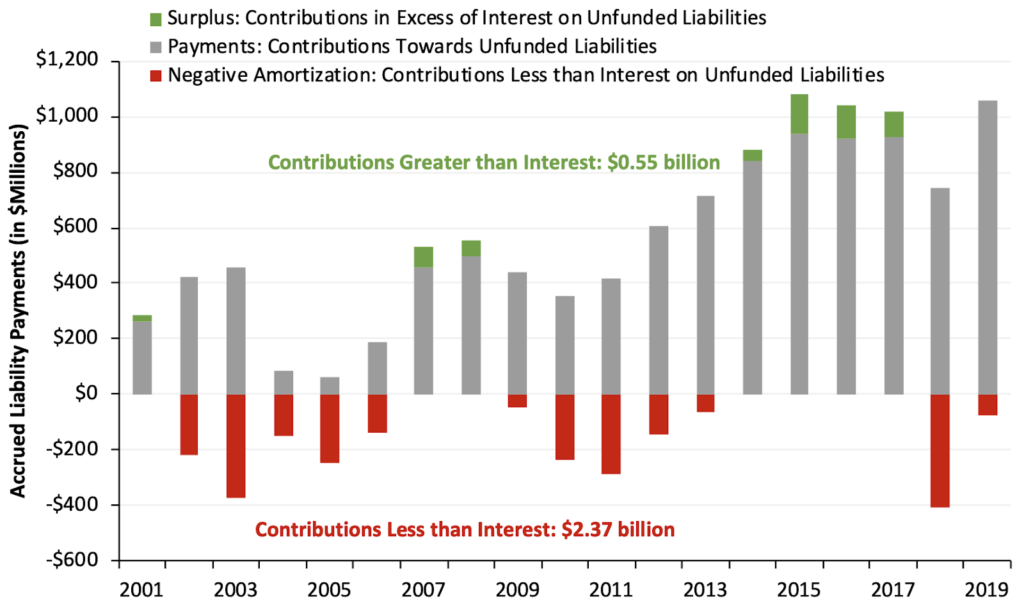 Here’s how actual experience has differed from actuarial assumptions:

ASRS new hire and rehire rates have differed from expectations resulting in a $543 million growth in unfunded liabilities from 2009-2014.

ASRS assumptions on the rates of employer withdrawal have differed from expectations resulting in a $21 million growth in unfunded liabilities from 2009-2014.

ASRS disability claims have been more than expected, resulting in a $14 million growth in unfunded liabilities from 2009-2014.

ASRS survivor claims for active members have been more than expected, resulting in a $13 million growth in unfunded liabilities from 2009-2014.

ASRS members have been retiring at younger than expected ages, resulting in a larger liability than expected and $7 million in growth in unfunded liabilities from 2009 to 2014.

Other ASRS assumptions (not specified in financial documents) have differed from expectations resulting in a $285 million growth in unfunded liabilities from 2009-2014.

ASRS survivor claims for inactive members have been less than expected, resulting in a $154 million reduction in unfunded liabilities from 2009-2014.

ASRS employers have not raised salaries as fast as expected, resulting in lower payrolls and thus lower earned pension benefits. This has meant a $2 billion reduction in unfunded liabilities from 2009-2014.

However, overestimating payroll growth is creating a long-term problem for ASRS because of its combination with the level-percentage of payroll amortization method used by the plan.

This method backloads pension debt payments by assuming that future payrolls will be larger than today (a reasonable assumption). But when payroll does not grow as fast as expected, employer contributions must rise as a percentage of payroll. This means the amortization method combined with the inaccurate assumption is delaying debt payments. 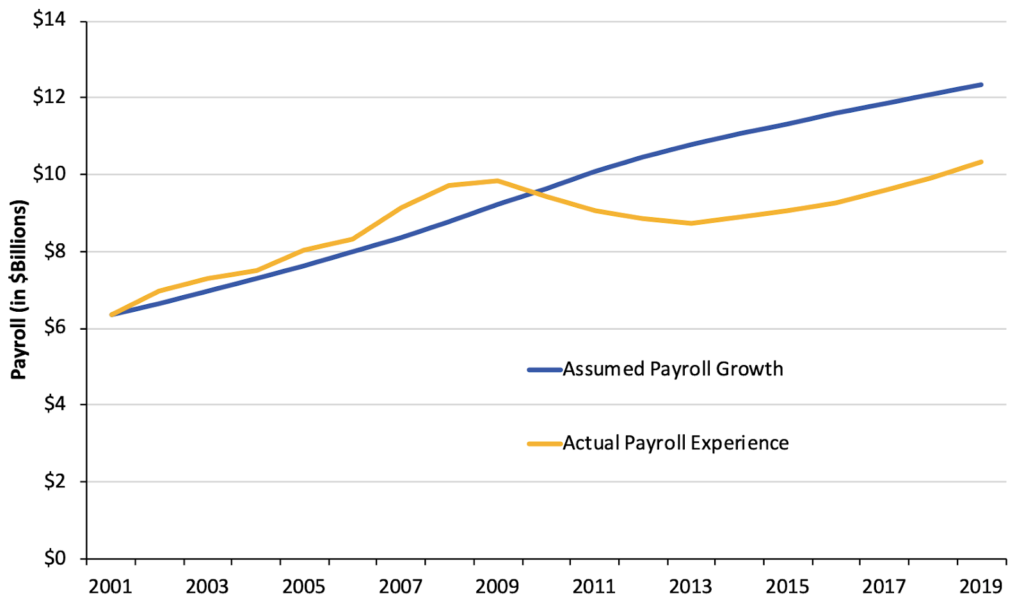 The “discount rate” for a public pension plan should reflect the risk inherent in the pension plan’s liabilities:

Setting a discount rate too high will lead to undervaluing the amount of pension benefits actually promised:

It is reasonable to conclude that there is almost no risk that Arizona would pay out less than 100% of promised retirement income benefits to members and retirees:

The discount rate used to account for this minimal risk should be appropriately low:

Challenge 5: The Existing Benefits Design Does Not Work for Everyone

2. Establish a Plan to Pay Off the Unfunded Liability as Quickly as Possible

The legislature could put maximum amortization periods in place and/or require a gradual reduction in the funding period to target a lower number of years:

3. Create a Path to Retirement Security for All Participants of ASRS

ASRS is not providing a path for retirement income security to all Arizona public workers:

Employees should have a choice to select a retirement plan design that fits their career and lifestyle goals: