Arizona’s cities and counties are finding it harder and harder to budget for all of the public services they provide to their taxpayers, and a major culprit is a dramatic growth in pension costs associated both with the Arizona State Retirement System (ASRS) and the state’s Public Safety Personnel Retirement System (PSPRS).

An analysis of public financial records reveals that significant growth in pension debt is the primary driver behind the increase in overall costs for Arizona taxpayers. Recognizing this problem, policymakers have implemented some significant reforms for PSPRS over the past few years, though more can be done to improve pension solvency. Even more crucially—judging by the important, and perhaps underappreciated, role it has played in driving costs—policymakers need to consider several areas of reform for ASRS.

Coconino, the largest county in Arizona, is no stranger to the increasing costs of public pensions. According to the Pension Integrity Project’s analysis of financial documents, the county’s total payments to ASRS and PSPRS have skyrocketed from about $0.8 million per year in 2001 to more than $13 million in 2018, with $5 million going to ASRS and $8 million going to PSPRS. This analysis does not account for additional costs derived from the Corrections Officers Retirement Plan (CORP) or the Elected Officials Retirement Plan (EORP), which means the costs have grown even more than displayed here (though at a much smaller scale for CORP and EORP relative to ASRS and PSPRS). 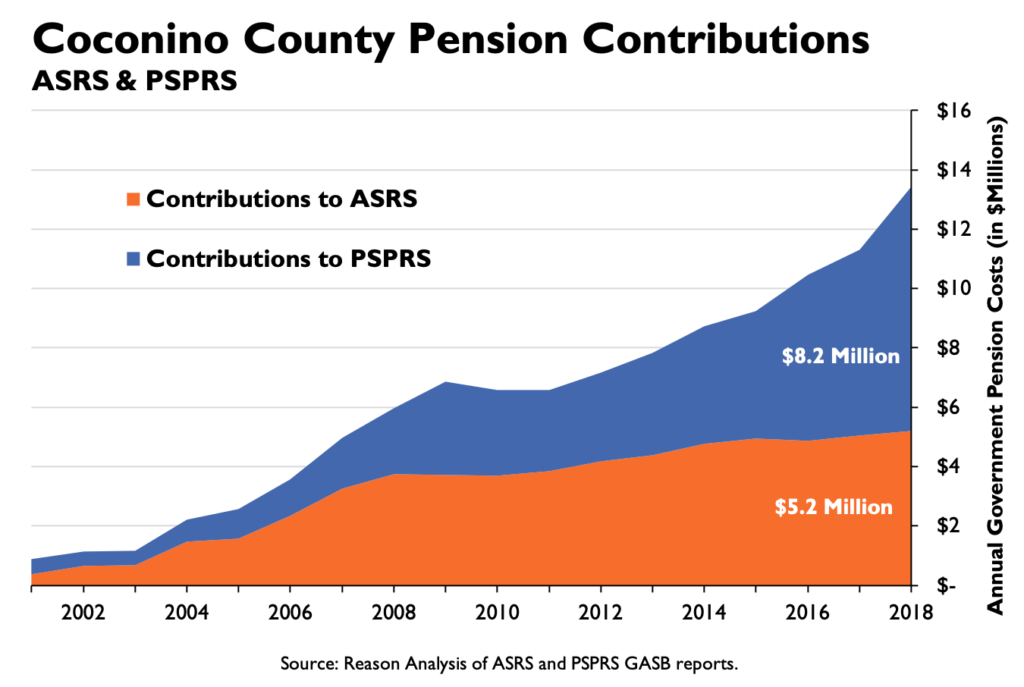 An increase in costs this large has far-reaching effects in local governments— Coconino County is paying more than 15 times more in aggregate ASRS and PSPRS contributions relative to what it used to less than two decades ago. This is reflective of the overall statewide trend. The total combined annual contributions into ASRS and PSPRS have risen to nearly $2 billion, a big jump from the $128 million in payments in 2001. Though there are certainly varying degrees of severity—some municipalities like Prescott and Bisbee have explored bankruptcy in the recent past in large part due to the rising costs of servicing pension debt—governmental units across Arizona are facing similar challenges to Coconino County, and local policymakers all across the state are weighing a range of options between reducing services, raising taxes or reprioritizing spending to keep up with the higher price tags attached to ASRS and PSPRS.

To some degree, increased dollar values dedicated to these pension payments are expected—as the state’s population grows, state and local governments need more employees, which generates higher overall pension liabilities over time. But in this case—and the case with many underfunded pension systems in the US today—the disparate rates of growth between payroll and pension payments indicate that there is something outside of growing employment that is the main source of increased costs.

Employers participating in ASRS have seen their required contributions to the pension plan—excluding contributions to the health and disability plans—go from just under 2 percent of payroll in 2002 to nearly 11 percent over the last 16 years, a nearly six-fold increase. [Note that the total required contribution for all ASRS post-employment programs, including the health plan, was 11.5 percent of payroll in 2018]. This means that employers like school districts are having to dedicate a significantly larger portion of their budget to pension costs, diverting resources away from the classroom and making it increasingly difficult to adjust teacher salaries and fund other priorities like technology and student enrichment programs.

So, what is driving up the costs of Arizona’s pension plans?

A deeper analysis of ASRS and PSPRS contributions reveals that Arizona’s escalating pension debt is the primary culprit. Over the past two decades, ASRS has precipitously accumulated an unfunded liability of $15.6 billion, with most—but not all—of the shortfall stemming from underperforming investments. This growing shortfall requires greater annual payments into the fund, so the system can eventually get back to full funding.

Just one year of returns at 6.5 percent—about one percentage point below the assumed rate—would require an additional $2.4 million in 2022 contributions for both ASRS and PSPRS combined. Assuming contribution shares stay relatively similar, Coconino County would be facing an additional $15,415 in 2022 pension expenses under this scenario, with 53 percent of that ($8,209) coming from added ASRS costs. 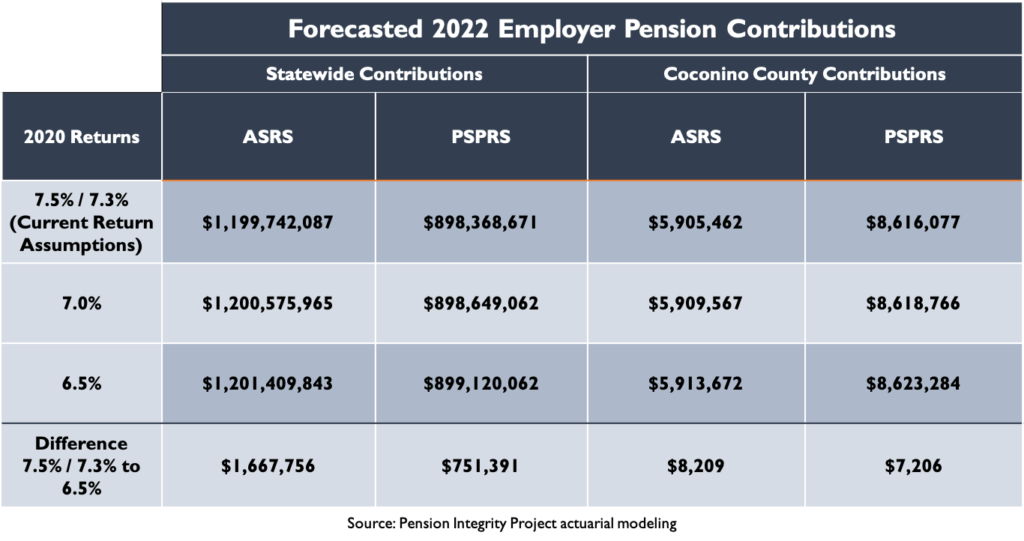 The rising contribution rates reflect that previous economic and demographic assumptions that influence pension math have not held and that the pension promises made to public employees are going to be much more expensive going forward—hence, the rise in the “normal cost” of prefunding future benefits. What’s worse, it took the ASRS board of trustees many years to change outdated actuarial assumptions—primarily the assumed rate of return—creating a large fiscal hole related to current pension liabilities that needs to be filled through additional pension debt payments.