Pension contributions in the City of Phoenix, Arizona are rising rapidly, gobbling up a large and growing share of the city’s budget. For the current fiscal year, the city has budgeted over $450 million for employee retirement costs, which is more than 10% of total municipal revenues for Phoenix (and over 20% of its general fund). Although this budgetary pressure will continue over the next few years, the long-term forecasts for the city’s public safety pension plan and general employee pension plan are very different.

COPERS Remains Problematic
City contributions to The City of Phoenix Employees’ Retirement System (COPERS), its single-employer plan for general employees (those who are not sworn police or fire officers), have risen rapidly since the beginning of the 2000s and are projected to continue rising in the coming years. In the early 2000s, the city contributed less than $30 million to COPERS. By 2020, this cost is expected to rise more than six-fold, surpassing $180 million annually.

Despite the rising contributions, COPERS remains severely underfunded. As of June 30, 2017, the system had $2.35 billion of assets (at market value) to cover $4.13 billion in actuarially accrued liabilities yielding a funded ratio of only 57%.

A strong stock market boosted system assets in late 2017. COPERS’ annualized return of 13.4% during the second half of calendar 2017 far surpassed its assumed 7.25% rate of return, but recent stock market volatility shows that these superior returns cannot be relied upon over the long term. 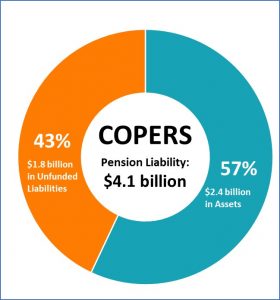 The system’s severe underfunding has persisted despite multiple attempts to reform the pension system.  In March 2013, voters approved a ballot measure that altered plan provisions for new hires. The biggest change affecting so-called Tier 2 employees hired after July 1, 2013 was an increase in employee contribution rates.  Tier 2 employees were required to contribute both to normal pension costs and to amortizing unfunded system liabilities. A 2014 Reason Foundation analysis found that Tier 2 employee contributions could have easily reached 20-25% of salary under the existing approach, making recruitment and retention problematic. By 2015, Phoenix realized their mistake and capped Tier 2 employee contribution rates at 11% ameliorating the recruitment problem but greatly limiting the fiscal benefit of the 2013 reform.

A second round of changes in late-2013 aimed at reducing pension spiking, in which employees take advantage of various loopholes to increase their final compensation that is then used to calculate pension benefits. The city council reforms restricted the ability to include unused sick and vacation time as well as communication and travel allowances in pensionable compensation. But while pension spiking raises equity issues, spiking reform has a limited impact on unfunded liabilities — this is because for the most part, COPERS pension debt was coming from its failed assumptions and not member spiking. In fact, a 2014 actuarial valuation report shows that actuarially accrued liabilities rose during the fiscal year in which these reforms were implemented.

A citizen led initiative took another stab at reform by placing Proposition 487 on the November 2014 ballot. This initiative would have placed all new employees in a defined contribution plan and implemented further spiking reforms affecting current employees. The ballot measure failed, in part because misplaced concerns were raised about the effects Prop. 487 would have on police officers and firefighters — the proposition would not have affected them since police and fire are covered separately by Arizona’s state-administered public safety pension system.

The most recent changes to COPERS came with a successful August 2015 ballot measure. Aside from limiting employee contributions to 11% of salary (mentioned above), Proposition 103 added a Tier 3 for new hires, a so-called “stacked hybrid” plan under which defined pension benefits for new employees were limited to the first $125,000 of annual salary, and compensation above that threshold would be covered under a 401(k)-style plan. Net savings for the city were estimated at $38.8 million over twenty years — an average savings of about $2 million a year — which is a very limited fiscal benefit considering that the system has a $1.78 billion funding gap (as of June 30, 2017). The marginal savings are in part because the vast majority of Phoenix employees make less than $125,000 a year, so Prop. 103 changed almost nothing in practice

Even if the stacked hybrid cap were lower than $125,000, the Tier 3 changes under Prop. 103 ultimately will do very little to help COPERS because it did not address the systemic challenges the municipal employee plan faces. Until COPERS caps the growth of accrued liabilities exposed to the risks of its assumptions and methods — and then changes those assumptions and methods to more realistic and less volatile rates and practices — there is just going to be a steady march upwards in costs.

COPERS remains a source of current and future fiscal pressure in Phoenix. It will require further attention in the coming years.

Public Safety Plans Stabilizing
Phoenix’s uniformed police and fire employees participate in Arizona’s Public Safety Personnel Retirement System (PSPRS), which is not controlled by the city. Phoenix’s contributions to these plans have also been rising rapidly, but recent reforms promise to improve the situation.

As the accompanying chart shows, Phoenix contributions to PSPRS will decline in 2019 after years of rapid escalation. In the long-run, public safety employer costs in Phoenix and across Arizona will stabilize as a result of a 2016 reform developed in consultation with the Reason Foundation and a 2017 provision allowing the city to stretch out payments on its pension debt over the next three decades.

For new employees, the 2016 reform caps pensionable income at $110,000 (down from $265,000), raises the benefit eligibility age from 52.5 years to 55 years of age and offers a defined contribution plan as an alternative to the traditional defined benefit plan. As a risk-sharing mechanism, employees hired after July 1, 2017 will be required to increase their contributions when the system’s actuarial experience is worse than expected. The primary element of the 2016 reform replaced a flawed benefit adjustment mechanism with a prefunded cost of living adjustment tied to inflation—a move expected to drive down long run costs (holding other assumptions equal).

The main reason that Phoenix’s contributions are stabilizing (for 2019 anyway) is that the city has opted to pay down unfunded pension liabilities at a slower rate.  According to PSPRS’s most recent actuarial report, Phoenix is amortizing its public safety unfunded liabilities over a 29-year period. This contrasts with most Arizona cities and counties that opted for a 19-year amortization schedule.  Previously, all PSPRS plans used a 20-year amortization period. So, the stabilization of Phoenix’s public safety pension contributions is due to a combination of state-level reform and municipal can-kicking. 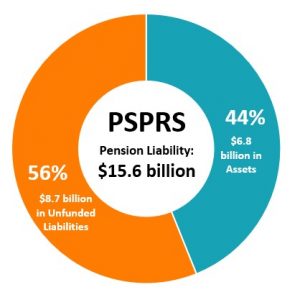 But the news on the public safety front is not all good. PSPRS is currently using a 7.4% assumed rate of return — an unrealistic assumption that is outside the control of the city, since it is set by a state-administrated system and board. Thus, the $8.7 billion in unfunded liabilities for Phoenix PSPRS is likely understated. As the assumed return is lowered over time — or, if it stays constant, as the unfunded liability amortization payment requirements mount — the contribution rates will jump again.

Ultimately, Phoenix does have an end in sight on the out of control costs for PSPRS. At the end of the 29-year amortization schedule (which would require a state law change to be extended again), the city should have its entire public safety pension debt paid down with the majority of its police and fire in the much more stable pension or DC retirement plans developed by the 2016 reform.

OPEBs Under Control
Relative to other large cities, Phoenix has done a good job of managing retiree healthcare costs. The city’s most recent Comprehensive Annual Financial Report does not show a liability for Other Post Employment Benefits. The city has a defined benefit OPEB plan for employees retiring prior to August 1, 2022, but the city makes actuarially required contributions to cover future benefits. Rather than cover all or even most of each retiree’s insurance premium, the OPEB benefit takes the form of an annual fixed subsidy ranging from $117 to $202.

Employees retiring later than August 1, 2022 are not part of the OPEB plan. Instead, the city makes a $150 monthly payment to a retiree health account on their behalf. After retiring, employees can use their accumulated balances to pay for health expenses not covered by Medicare. Because the new retiree health plan relies on a defined contribution model it can never produce unfunded liabilities.

Conclusion
Since the early 2000s, rapidly rising employee retirement costs have put pressure on Phoenix’s budget. OPEB reforms, state level public safety pension reform and slower amortization of public safety unfunded liabilities should slow the rate of increase in coming years. Although the city has taken several steps to reform COPERS, further changes – perhaps modeled on those implemented at PSPRS – will be needed to fully protect the city from further pension crowdout.