During an August Investments and Pensions Oversight Committee (IPOC) meeting, the Educational Retirement Board’s administrative leadership spoke to state legislators about the long-term funding prospects of the plan and laid out three options they believe could get ERB back on track to being fully funded by 2050.

These suggestions were to increase employer contribution rates, transfer the pension plan’s reported $9 billion in unfunded liabilities to the state’s general ledger through a bond offering, or decrease retirement benefits offered to ERB members.

Legislators and ERB seem to have come to an agreement on a plan to increase employer contributions and ERB has already drafted legislation to do so.

The bill is set to be introduced by State Sen. Mimi Stewart (D-Albuquerque) in the 2021 legislative session. The proposed bill increases the annual statutorily-set ERB employer contribution rate from 14.15 percent to 18.15 percent, increasing one percent a year over four years.

In its latest presentation to IPOC on December 10, the New Mexico Educational Retirement Board’s administrators used the plan’s latest valuation report to walk policymakers through its current $9 billion shortfalls and 60 percent funded status by way of highlighting the fact that there is currently no path for ERB to fully fund retirement benefits. Plan administrators warned that, historically, ERB has had the ability to pay benefits in perpetuity, but for the first time in its history, ERB is expected to exhaust that ability soon absent changes to current funding policy.

The employer contribution rate is the amount of funding that the state is required to contribute to the plan each year. This funding increase recommendation is the latest legislative attempt by ERB to ensure the retirement benefits of state-employed educators are fully funded and available to retirees over the long-term.

Previous well-intentioned efforts to increase retirement eligibility requirements, increase member contributions, and tie retirees’ cost-of-living-adjustments (COLAs) to ERB’s funded ratio (all of which focused on the member’s influence on the funding formula) have made a small impact on the resiliency and long-term solvency of ERB.

Figure 1 below displays the funding history of the plan. 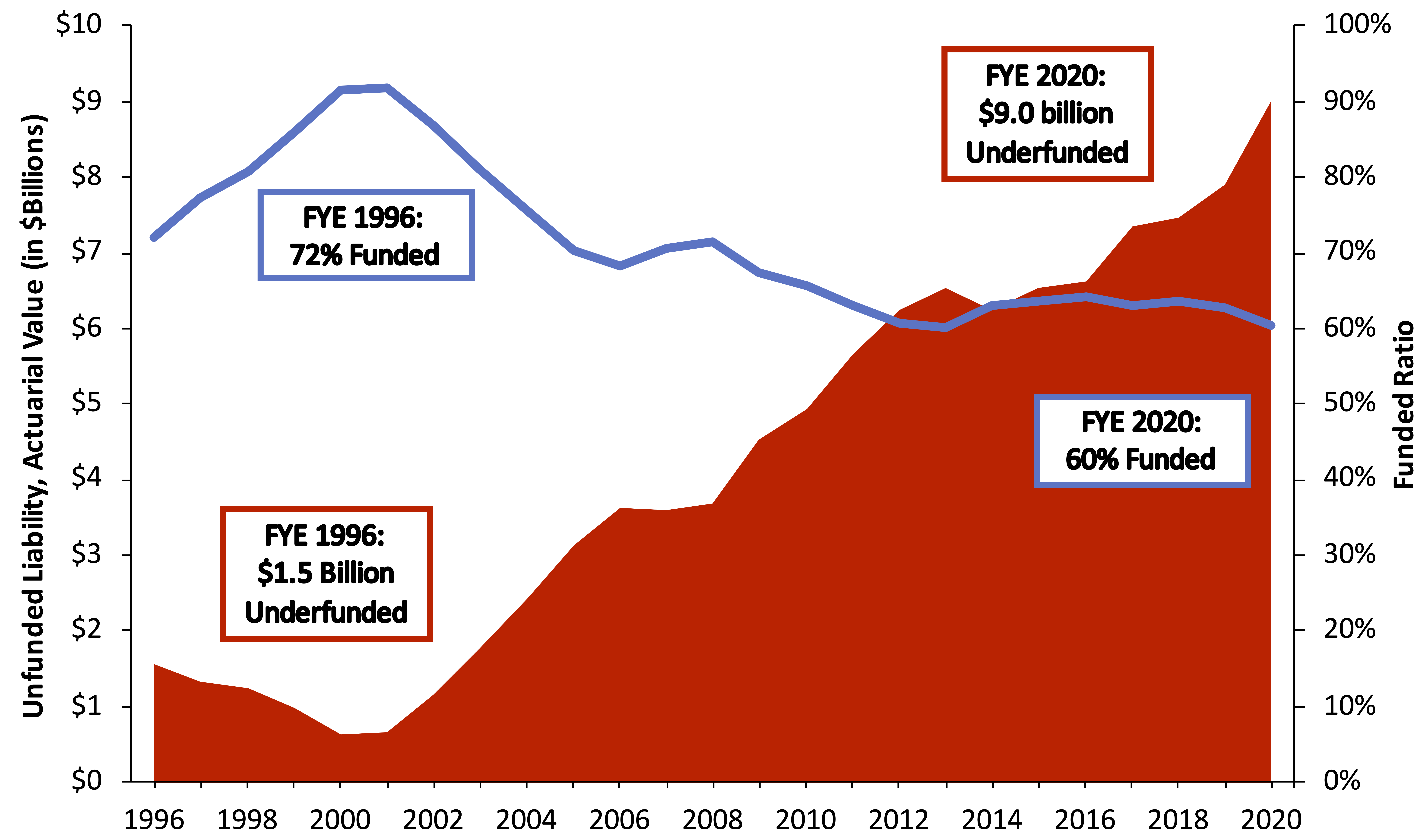 Actuarial analysis of ERB’s latest proposal suggests that the increased employer contribution rate, while a positive step, would only make a difference in the plan’s long-term sustainability if all actuarial assumptions are met over the next 30 years.

The Pension Integrity Project at Reason Foundation modeled the proposal and found that if implemented, ERB’s 2050-projected unfunded liability would decrease by nearly 40 percent, decreasing from $34.2 billion in debt to $20 billion. The ERB proposal, however, would still ultimately result in the plan’s accrued benefits being only 66 percent funded in 2050.

In short, the proposed changes could be a good, small reform and the plan’s funded status would marginally improve if all actuarial assumptions are met over the next 30 years, but ERB would still have significant structural problems and remain far short of full funding.

From a solvency perspective, the impact of increased contributions on ERB is clear: the more contributions the better. However, our analysis also finds that when accounting for potential future market underperformance, absent addressing the systemic issues driving the growth of unfunded benefits, ERB’s funding issues are bound to worsen.

To be sure, increasing contributions to address growing unfunded liabilities is a good policy step for many public pension plans, but often more changes are necessary to fully address the fiscal stress pension debt puts on employees, retirees and taxpayers.

Figure 2 illustrates this important finding by comparing the current state of ERB, where all actuarial assumptions governing the plan—including ERB’s current 7 percent investment return rate assumption—are accurate each year, to a less optimistic forecast that shows the condition of ERB after 30 years of more conservative investment returns and two recessionary periods.

Figure 2: The Effect of a 4 Percent Employer Contribution Increase on ERB’s Funded Ratio 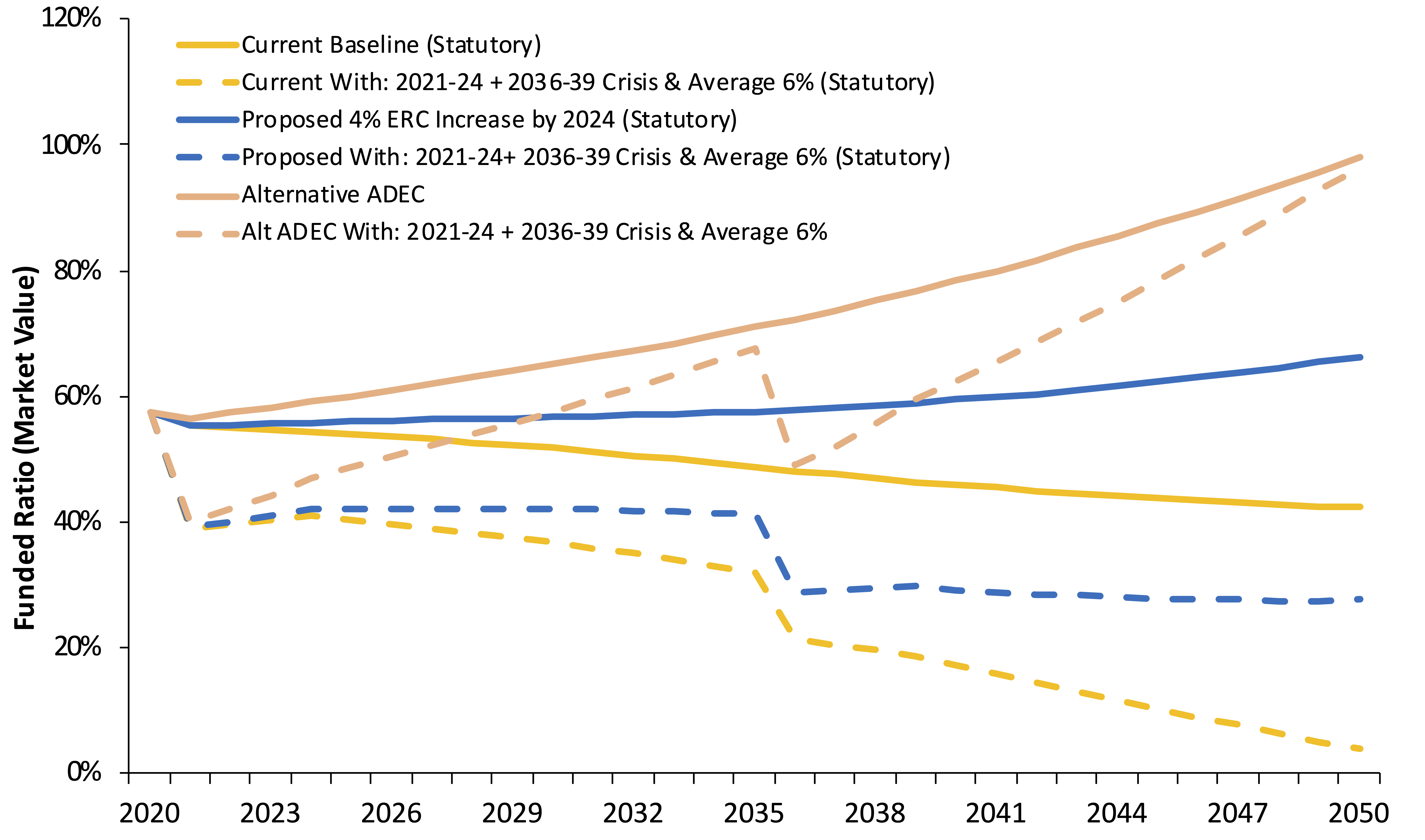 In the event that all of the plan’s assumptions are consistently accurate over the next 30 years, additional state funding would improve ERB solvency. But the proposal to increase contributions does nothing to address the current unfunded liabilities or the system’s exposure to market volatility.

Additionally, ERB funding improvement relies on the theory that the system’s investment return rate assumption of 7 percent, among others, will either be met or exceeded in the near-term, which ERB administrators and consultants say they believe is a reasonable assumption.

When assumptions are missed, especially the plan’s investment return rate assumptions that serve as the only other funding source outside of members and taxpayers, ERB’s unfunded liabilities would grow despite increased contributions from the state. Thus, in the overall picture, the proposed contribution increases wouldn’t prevent the further accrual of unfunded retirement benefits by public educators, who, for their part, have honor the obligation their side of the agreement entered in when first hired. 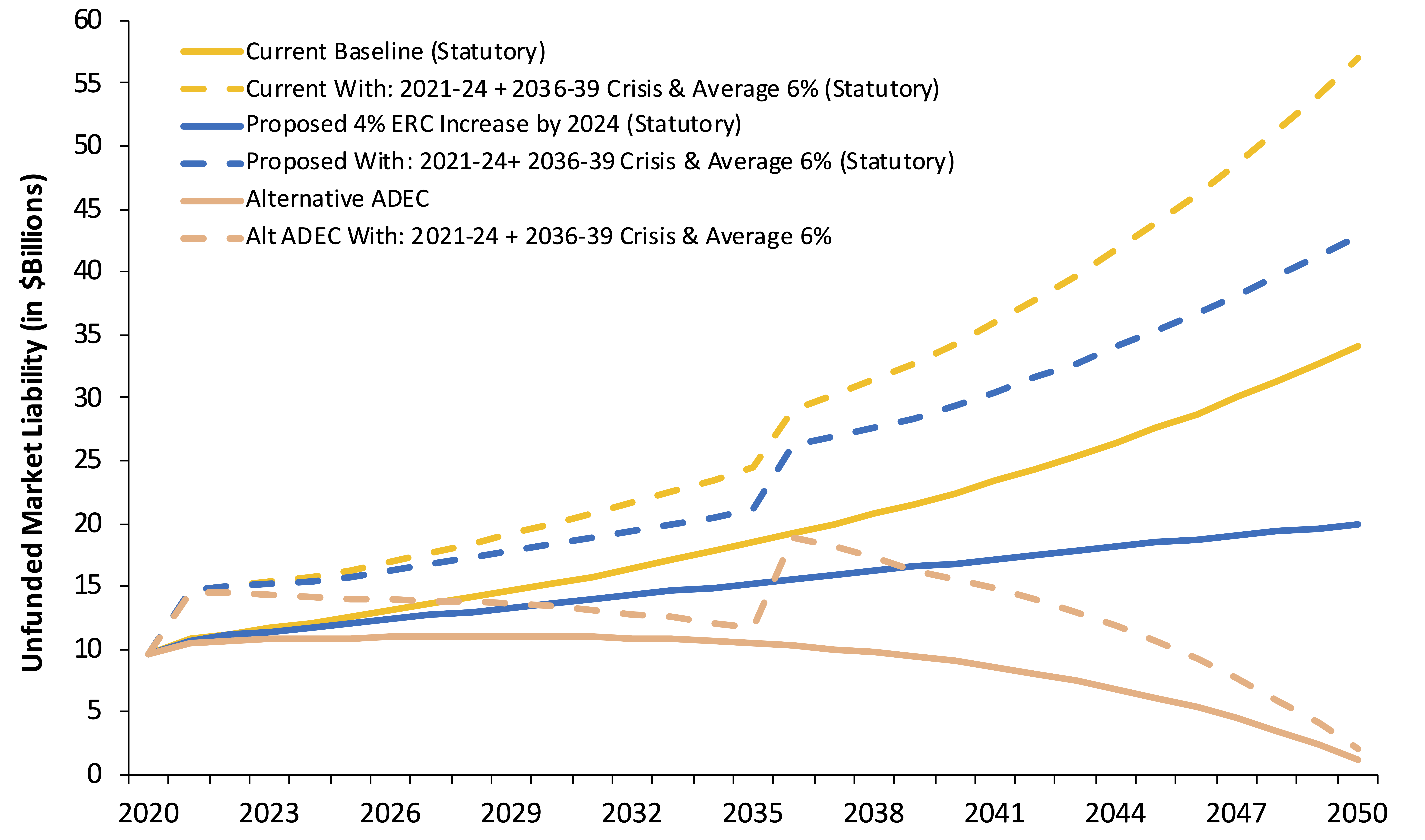 A less lucrative investment portfolio and recurring recessions over the next 30 years, which most economists expect, would likely result in significant drops in ERB’s funding regardless of the proposed employer contribution increase.

Increasing the contribution rate is a good idea but without also addressing the volatility inherent in the ERB investment portfolio and adjusting how the state is paying off its debt and unfunded liabilities, ERB will remain less and less resilient to economic and stock market shifts over time and will continue to accrue ever higher unfunded liabilities.

The proposed contribution increase would certainly be beneficial from a solvency perspective, but ERB’s situation requires far more substantive adjustments to how unfunded liabilities are tackled and how the plan reacts to underperforming investment results if it is going to ensure retirement benefits for New Mexico’s teachers and educators are sustainable and financially resilient to market shocks over the long-term.

Elsewhere, in 2018, the state of Colorado not only increased employer and employee contributions to its main public pension system but also established an automatic adjustment feature— automatically increasing annual pension contributions and lowering the pension plan’s cost-of-living adjustments if certain funding thresholds are not met. The city of Fort Worth soon followed suit, enacting a similar automatic adjustment policy for its public workers’ pension system.

Adding an automatic adjustment policy to increased contribution proposals would not only improve the trajectory of ERB funding but could also insulate the system from unpredictable market returns in the future. Such a policy would allow annual contributions to respond more freely to changing conditions and ensure that if any future investment returns come in below expectations, they do not derail the public pension system’s trajectory towards full funding.

The best way for New Mexico lawmakers to address the problem of contributions not adjusting to market volatility and performance would be for the legislature to contribute annually to ERB at an actuarially determined employer contribution (ADEC) rate.

Every year, ERB’s actuaries calculate the amount of funding the pension plan needs from all sources to avoid any growth in unfunded pension liabilities. Currently, the state does not rely on this ADEC value to determine its annual contributions, as many pension plans across the country do. Instead, ERB relies on a fixed percentage of payroll set by law at the discretion of legislators. The result of this policy has been chronic underpayments, adding to the system’s long-term solvency concerns.

Figure 4 illustrates this problem, showing that state contributions into the fund have been below actuarially required amounts for nearly 20 years. 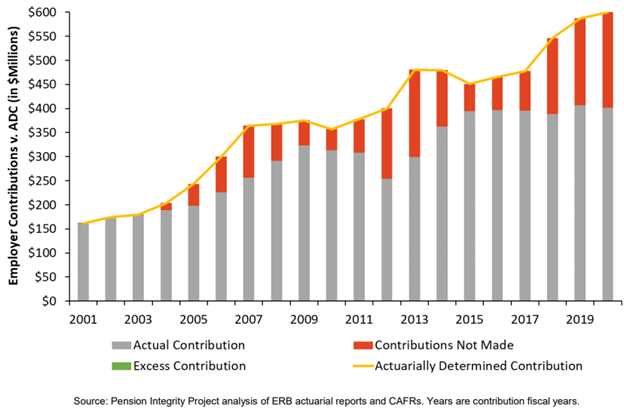 ERB would benefit from adjusting its funding policy to match the many other states that rely on the actuarially-determined amount to set annual contributions. This change in policy, like the proposed automatic adjustment feature, would protect the post-employment security of New Mexico educators from the unpredictable future of the market.

Figures 2 and 3 above also include scenarios modeling an ADEC-based policy, which shows ERB’s funded ratio rising to nearly 100 percent and its unfunded liabilities being nearly eliminated in 30 years.

However, despite the contributions increases moving ERB off the path of insolvency, the proposal’s success relies heavily on the ability of ERB to achieve expected returns. Because of this, the retirement security of the 12 percent of New Mexico educators who serve their communities long enough to earn an unreduced ERB retirement benefit, will continue to be exposed to a great deal of risk and ERB will still need additional adjustments in the future.

Adopting more risk-averse investment return assumptions and funding policies to prevent the further growth of unfunded benefits, while establishing a plan to pay off the plan’s existing unfunded liability as quickly as possible would directly address the systemic underfunding that has created the challenges facing ERB today.