Public pension administrators in New Mexico are warning policymakers of the potential need for retiree benefit cuts to ensure the system is able to reach full funding in the next several decades and meet its promises to retirees and employees.

In an August presentation to the New Mexico Investments and Pensions Oversight Committee, the state’s Educational Retirement Board (ERB) administrators warned that without significant employer contribution increases, there may need to be benefit reductions for the pension plan’s active and new members. They said these cuts would help the plan, which serves all of the state’s K-12 educators and some higher education employees, reach full funding in a 30-year period.

At this time, it will take the New Mexico Educational Retirement Board 47 years to pay off its accumulated debt. According to the Society of Actuaries (SOA), the recommended payoff period for public pension debt is 15-to-20 years.

These numbers do not take into account the fact that ERB reported a negative .97 percent return for its last fiscal year. Estimates show that this negative return could add an additional $1 billion of debt to the pension system.

The director of ERB discussed a variety of ways these pension cuts could play out, including a reduction of the benefit accrual rate for future service, which would mean workers receive fewer retirement benefits for the same employee contributions. Also discussed was a 0.5 percent cap on cost-of-living adjustments (COLAs) until the plan is projected to reach 100 percent funding within 30 years.

While it is good that ERB is highlighting the urgency of the pension plan’s financial troubles, cutting benefits without addressing structural and funding policy issues undermining the sustainability of the pension plan would be an inadequate approach to solving a nuanced problem.

Rather than jump to benefit cuts, the state legislature could explore more substantive reforms that could put ERB on a realistic debt payoff period, just as the legislature did last year when it passed reforms to the New Mexico Public Employee Retirement Association (PERA), the state’s other major public pension system.

PERA has consistently maintained a higher funded ratio than ERB while also paying out higher benefits, but last year unpromising financial forecasts prompted the legislature to enact plan changes to help improve the system’s solvency. These changes included a shift to a flexible COLA that adjusts based on fiscal conditions and a “shared sacrifice” of an equal employer and employee contribution rate increase.

According to PERA’s own projections, these changes will raise the plan’s chances of reaching full funding by 2043 from 38 percent to 47 percent and will save the state from accruing an estimated additional $15 billion in unfunded liabilities during that period. These changes increase retirement security for employees and retirees, and ERB should look to implement similar reforms.

ERB has not been completely inactive in trying to ward off insolvency. In April 2020, the plan reduced its assumed rate of return on investments from 7.25 percent to 7 percent. This change will limit the opportunity for new debt to accrue as a result of investment shortfalls.

In the last 20 years, ERB has averaged a 5 percent investment return and their return for this last fiscal year was negative .97 percent. And, well before the COVID-19 pandemic and recession arrive, financial experts were saying a lower yield investment environment would plague public pension plans for the foreseeable future. The below chart compares ERB’s assumed rate of return to actual investment returns since 1995. 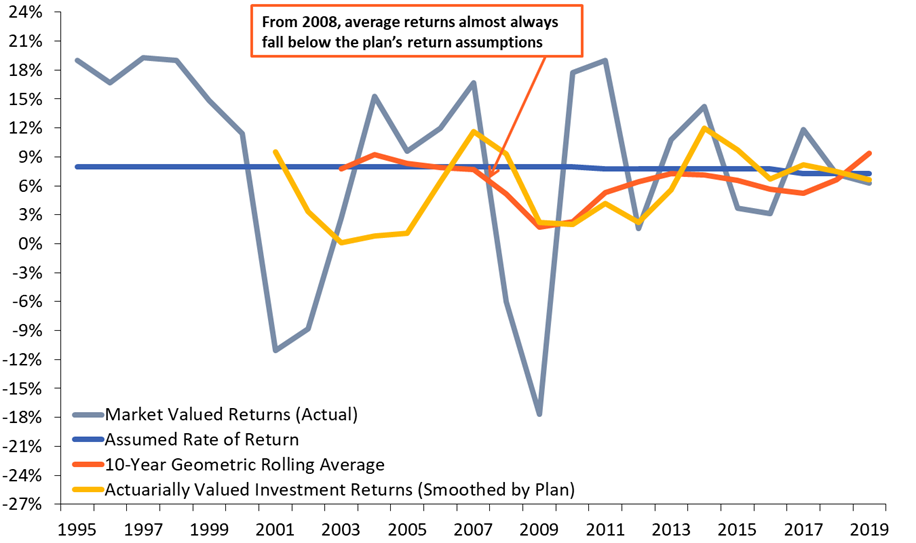 State law has also contributed to ballooning unfunded liabilities as annual pension contribution calculations for ERB are set in state statute rather than by plan actuaries who calculate the actual amount required to fully fund benefits each year. Over the last 20 years, actual contributions have shorted ERB of $1.4 billion in payments.

This is funding that will eventually need to be recouped via either higher contributions or higher than expected investment returns. It would behoove state policymakers and taxpayers to make pension reforms sooner rather than later. Every year that passes without this money in the pension fund means more lost investment revenue, making the retirement plan more expensive for employers, members, and ultimately taxpayers.

The chart below displays the gap between the actuarially determined contributions and the actual contributions made by the state each year since 2001. 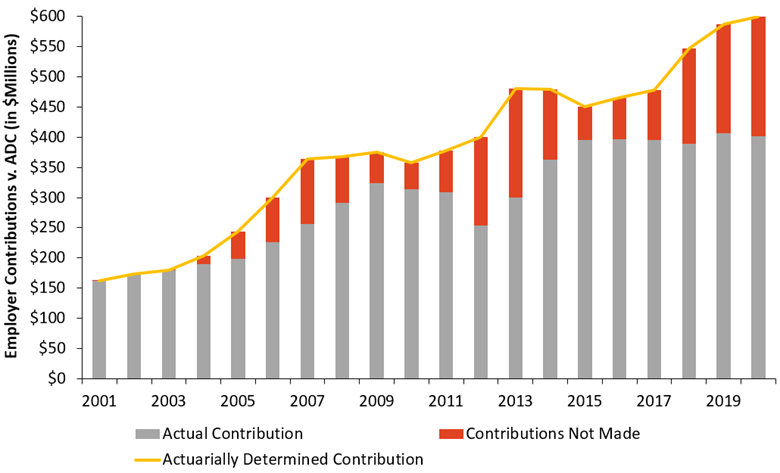 These structural problems are the main contributors to ERB’s growing debt and the increasing likelihood that pension benefits will be reduced.

State policymakers should begin to address these challenges with meaningful and lasting pension reforms based on informed analysis, just as they have done for New Mexico’s Public Employees’ Retirement Association. If meaningful action is taken quickly, the pension benefit cuts the plan is currently warning about and considering could be avoided.