Relative to private data sources, such as the Center for Retirement Research’s Public Plans Database, the Census Bureau’s Annual Survey of Public Pensions provides data on more systems but has far fewer attributes for any given system.

The Census Bureau’s 2019 survey found that state and local pension plans were 73.6 percent funded on a dollar-weighted basis, meaning for every dollar of liabilities these systems reported, they had 73.6 cents in assets. Actuarially determined liabilities totaled $4.7 trillion while the assets to cover these promised benefits totaled just $3.5 trillion.

The Census Bureau also found that 76.1 percent of surveyed pension plans made actuarially determined employer contributions (ADEC) that equaled or exceeded amounts calculated by system actuaries. ADEC is the amount calculated each year by the plans’ actuaries to determine how much the employer needs to contribute to a pension fund’s pool of assets to maintain full funding. ADEC typically consists of the employer’s share of the normal costs plus any unfunded liability amortization payments needed to cover the existing debt.

The goal of pension plan managers is that these contributions accumulated over the years, together with the interest gained on them, are sufficient to pay for promised pension benefits. Failure to pay ADEC in full in any year results in the growth of unfunded liabilities and a decline of the funded ratio of the pension plan.

Underpayments by just five systems accounted for the entire nationwide gap between actuarially determined employer contributions and actual payments (across the other 865 systems, overpayments and underpayments roughly offset each other). Across the Census Bureau’s sample, total ADEC requirements were $149.3 billion in 2019, while actual contributions were $144.2 billion. 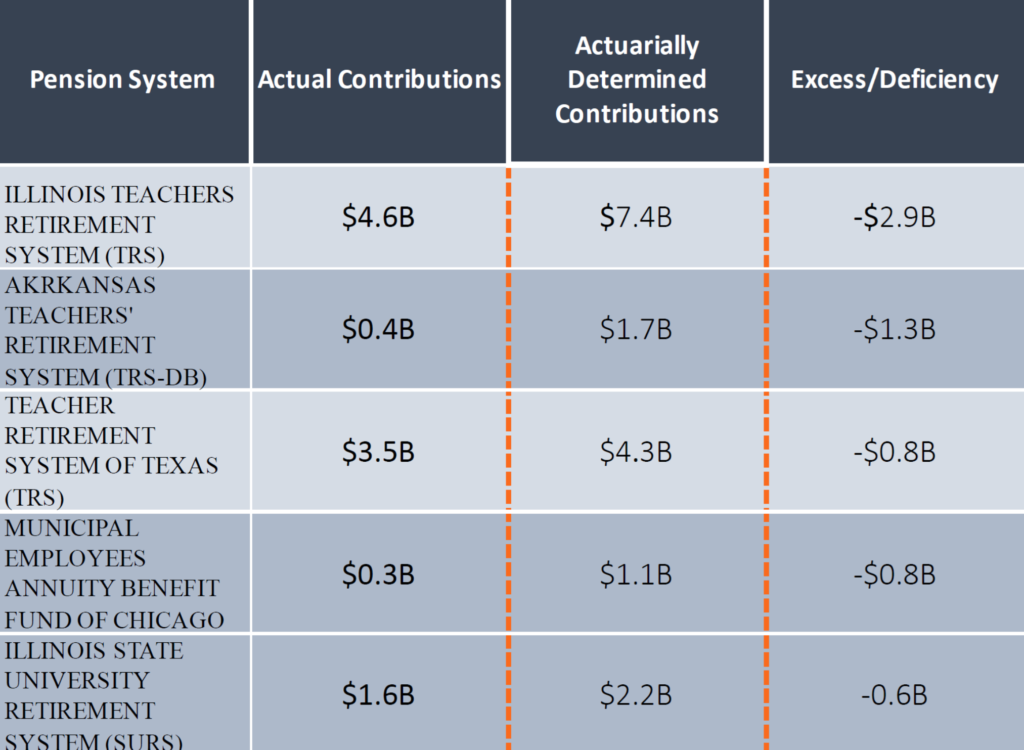 According to a report by the National Association of State Retirement Administrators (NASRA), pension plans that fail to pay their ADEC in full increase unfunded liabilities, and thus increase the long-term costs of funding their pension plans.

Any pension funding shortfall represents a portion of assets that a system will not be able to use for gains through investment returns, a key to the success of a retirement plan. If a plan is losing out on investments, this deficit must be made up with additional contributions down the road.

Other than statutorily determined contributions, another reason for not paying ADEC in full could be overall budgetary constraints. The long-term nature of pension liabilities could tempt policymakers to underpay the actuarially determined employer contributions in times of market fluctuations and extraordinary circumstances in order to divert funds to more immediate priorities.

To guarantee the long-term solvency of public pensions, plan stakeholders need to prioritize adequate payments into the system. Failing to pay enough can derail the plan from accumulating enough funds to pay out pension checks for future retirees. The latest results from the Census Bureau demonstrate some major shortcomings in funding policy for public pensions and should be addressed by states and localities quickly.