Texas’ state public pension systems are likely to approach nearly $61 billion in unfunded liabilities, putting the state in a poor position to keep retirement promises to its workers. Growing shortfalls require higher annual contributions at a time when budgets are tightening and the state is approaching maximum pension contribution limits established by the Texas state constitution. As a result, the Texas House Committee on Pensions, Investments & Financial Services has charged the legislature to assess the growing costs of the state’s two largest public pension systems. Reason Foundation’s Steven Gassenberger and Leonard Gilroy submitted testimony on this charge, noting numerous possibilities for reform through improved assumption setting, increased transparency, and strengthened plan resiliency.

The United States Postal Service (USPS) has been spotlighted recently for policy changes, delivery delays, its potential impact on the election, and serious long-term fiscal problems. Unfortunately, these financial difficulties have been around for decades, in part because of its large unfunded liabilities for retiree benefits. The Pension Integrity Project’s Jen Sidorova examines recent legislation seeking to improve the agency’s financial position, noting that the changes Congress has considered thus far will not fix the long-term debt issues of the USPS.

Entering 2020, state governments were carrying over $1.2 trillion in public pension debt. The financial impact of the COVID-19 pandemic and the recession will certainly exacerbate the growing gap between benefits promised by state governments and the assets they need to live up to those promises. In response to ongoing calls for giving federal taxpayer assistance to state and local governments to help them cover underfunded pension plan shortfalls, Reason’s Adrian Moore and Marc Joffe explore potential bailout proposals and weigh the tradeoffs accompanying each. Ultimately, they find that even the best-structured federal loans would come with significant fairness and oversight problems that would be difficult, if not impossible, to overcome. State and federal policymakers should instead emulate other states like Michigan, Arizona and New Mexico, where they’ve made meaningful and lasting pension reform efforts.

Public pension plans depend heavily on investment growth, but most plans have struggled in the modern era of historically low interest rates and diminished capital market returns. In August, the 10-year Treasury yield rate hit an all-time daily low of 0.52 percent. Because government bonds currently make up about 23 percent of public pension investment portfolios, lower yields in this area can increase the pressure on public pension plan managers to find higher yields in riskier investments to make up the difference. Reason’s Jordan Campbell illustrates the long path of 10-year Treasury rates, showing, via animation, their historic drop going back to the 1960s.

Earlier this summer, the Austin City Council approved a plan to reform the police department and reduce its budget. Despite these reforms, the city’s long-term costs for police pensions will continue to grow. Right now, Austin has approximately 58 cents of every dollar it needs to fully fund its police pension plan. Reason’s Steven Gassenberger warns that the city needs to take preventative action to reduce future increased unfunded liabilities. He suggests city leaders take advantage of the recent focus on police budgets to permanently address the risks that have driven police pension underfunding and put taxpayers on the hook for this debt.

Despite the fact that their asset portfolio recently hit an all-time high, the North Carolina Teachers & State Employees Retirement System’s (TSERS) funding levels have been steadily declining for decades. Over the past 20 years, TSERS has dropped from 111 percent funded to 86.4 percent funded, largely due to investment performance falling short of the system’s return assumptions.  A shift to riskier investments has also exposed the system to more funding volatility. In a new pension solvency analysis, Reason’s Jen Sidorova and Len Gilroy detail the fiscal status of TSERS and identify key areas of possible reform, including adjustments to actuarial assumptions and expansion of retirement options for North Carolina workers.

While financial markets may appear to have largely recovered from their initial downturn sparked by the COVID-19 pandemic, public pension plans are still in danger of underfunding due to lowered revenue for state and local governments, according to a new report by Jean-Pierre Aubry and Kevin Wandrei of the Center for Retirement Research at Boston College. Their projections estimate further financial deterioration for all public plans given increased strain to meet actuarially determined contributions. They also note that some vulnerable local plans may actually run out of assets if markets are slow to recover. The report is available here.

How Will Teacher Retirements Change in the Midst of COVID-19?

About 90 percent of public school teachers are enrolled in defined benefit pension plans, which guarantee stable payments regardless of external economic factors. As a result, retirement ages stay relatively steady during a recession. Chad Aldeman of TeacherPensions.org examines polling during the pandemic, to detect any significant shifts in teacher retirement patterns. Many teachers are older, and therefore in heightened COVID-19-risk populations. Many may also dislike the shift to virtual learning and may retire early. Even so, Aldeman predicts that teacher retirement rates will stay relatively on par with norms. The brief can be found here.

With bond yields reaching record-low levels, the low cost of borrowing is tempting state and municipal governments to turn to pension obligation bonds (POBs) to reallocate pension debts and reduce long-term retirement system costs. A recent brief from the Heller-Hurwicz Economics Institute at the University of Minnesota finds that this option is not as appealing as it appears on the surface. The brief illustrates how the issuance of a POB may solve short-term funding issues, but does not address the long-term challenges that caused underfunding in most of the country’s public pension plans. The results of these findings further support the argument that underfunded public pension plans need fundamental and lasting reform that takes into account the larger trends that have dragged most plans well below full funding over the past two decades. The full brief can be found here.

What is the impact of market shocks to pension plans across America? In a pair of briefs published by the Mercatus Center—available here and here—Reason’s Marc Joffe presents case studies of several municipal governments and an overview of the state of public pension plans across the nation. He finds that plans with low general fund balance ratios and high liability-to-revenue ratios are more susceptible to market conditions and possible bankruptcy.

“We continue to focus on cutting costs to maximize the value we get from our investments. We cannot let Wall Street drag the plan into risky and dangerous investment schemes that increase fees and jeopardize the solvency of a plan that exists to benefit those that teach, protect and serve.”

“Every year that the fund doesn’t meet the expected rate of return is another year that it falls further behind and puts more strain on the system. As a result, unless the funds can catch up with better than expected performance the General Assembly will be forced to contribute a greater amount to the fund.”

—Wil Schroder, Kentucky state senator and co-chairman of the Public Pensions Working Group, quoted in “The Stock Market is Up. Why Did the KY State Pension System Only Earn a 1.2% Return?”, Lexington Herald-Leader, August 20, 2020

“We know what markets will do: they will go up and they will go down. What so many active Wall Street managers have sold our nation’s pension funds on is the idea that – for a hefty set of fees – they can help pensions experience almost all of the gains and none of the losses. We need to recognize that for the fantasy it is.”

Each month we feature a pension-related chart or infographic of interest curated by one of our Pension Integrity Project analysts. This month, Quantitative Analyst Jordan Campbell visualizes historical Treasury yield rates, demonstrating how the continued shrinking of interest rates will challenge pension plan investments. Read more about the animated chart here. 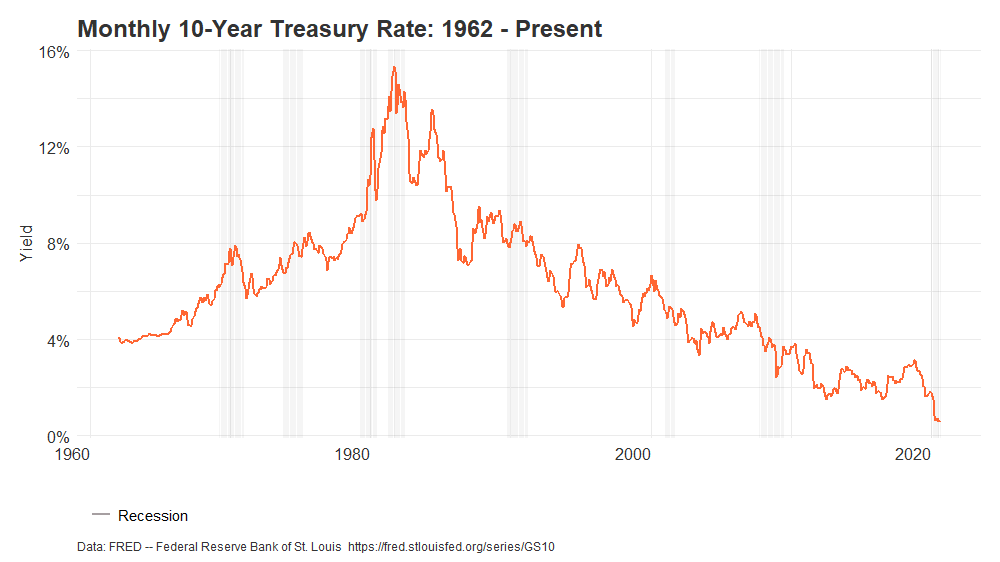