As 2017 came to a close and the stock market soared to all-time highs, job growth remained consistent, and unemployment dropped, many remained perplexed and frustrated by the lack of growth in real wages.

There have been various policy responses to this problem — minimum wage increases, tax credits for businesses, tax credits for workers, more investment in education, etc. But is it possible that studying average wages leads to asking the wrong questions? Perhaps one way to think about the problem is to cross-examine real-world employment skills with real wage growth.

A new Brookings study utilizes the O*NET Digital Skills Survey (2000-2016) to explore the relationship between digital skills, education, and real wages by quantifying digital skills as an equal combination of “knowledge of computers and electronics” and “work activity interacting with computers.” This chart is from the Brookings report: 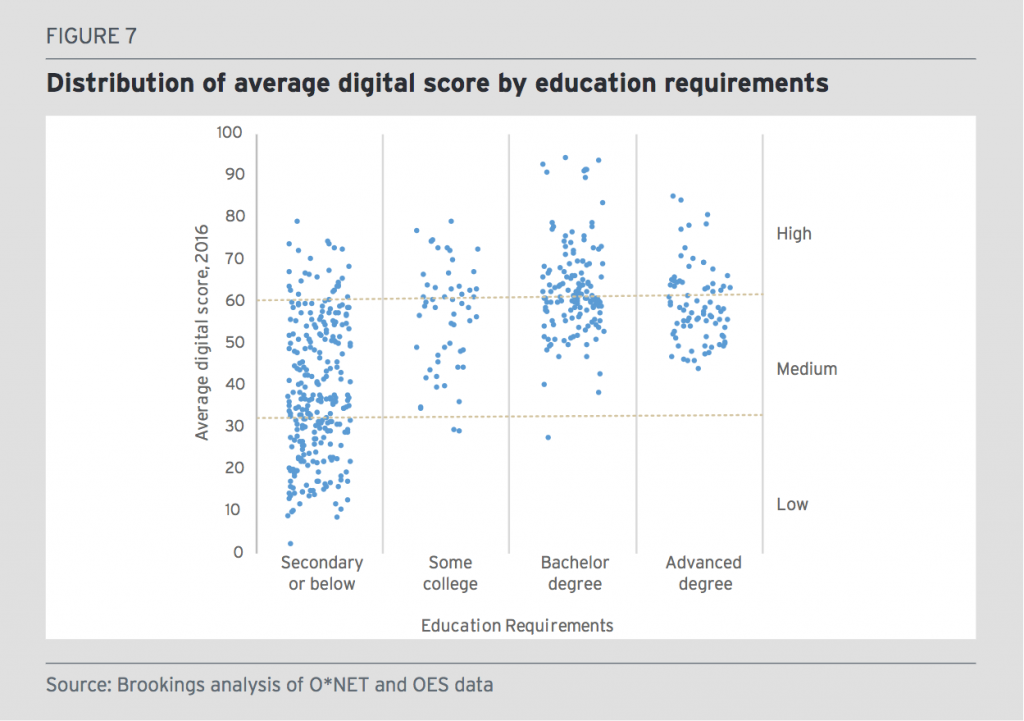 The study finds that digital skills are a unique human capital component that is empirically distinct from education, with only a weak correlation between education and digital skills. As such, they ran a regression analysis between digital skills and wages and found “digitalization scores have significant and positive effects on real annual wages even when controlling for education level. And the effect is growing.”

The authors note that in 2002, a one-point increase in digitalization score produced about a $166 dollar per year premium, and that number increased to $292 by 2016. 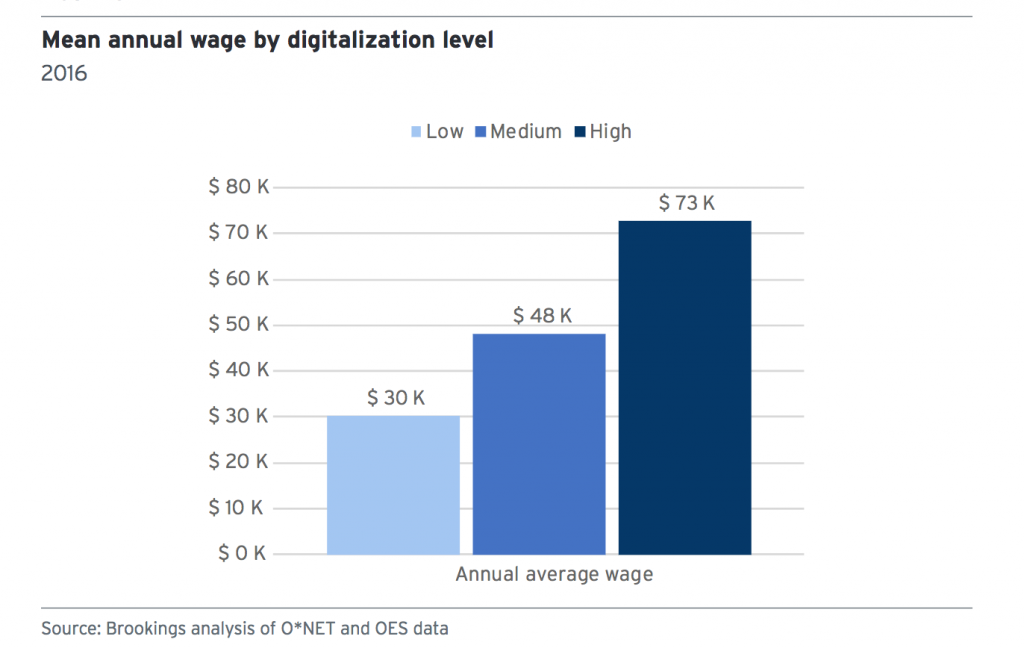 Their analysis shows that real wages have grown tremendously over the last 15 years for those who are high in digital skills. It is important to understand that this is happening for workers across all educational levels, meaning even jobs that don’t require a post-secondary degree are paying a premium for workers with digital skills, and that premium is growing over time.

For example, even learning a basic technology skill like using Microsoft Excel, which has been around for 30 years, can help earn more money. The point is that the world has gone nearly completely digital, and everyone from janitors to lawyers needs to learn how to use digital technology to remain valuable in the workplace.

Is it any surprise that in a time where 70 percent of the developed world has a globally connected supercomputer condensed into their pocket, that those who have some way or another (certainly not through the educational system) acquired digital skills are seeing healthy growth in real wages?

This all matches a trend in macro firm data – firms across all industries that are specializing in digital technology are increasing their productivity, profits, wages, and market share.

So are real wages flat for workers? If you use a blunt statistical instrument like average real wages, sure — but that is an ecological fallacy of sorts — to make presumptions about the nature of an individual’s wages based on a massive average of over 100 million people. Following averages over time will lead to severe misjudgments about the nature of smaller groups and individuals themselves within the group.

There are two important takeaways from the Brookings study. Over, at least, the last 20 years:

The negotiation of wages is an immensely complex and organic process that is reshaping itself every week, month, year, and decade. The desired skills of employers have significantly changed over the last 20 years to value a form of human capital empirically distinct from education, and, in the next 20 years, other skills may emerge that we do not yet know about. It’s important to recognize this penetrating dynamic reality and don’t fall for static “solutions.”