New research papers from the OECD and MIT are helping to explain lackluster post-recession economic growth by showing how “superstar” or “frontier” firms have captured a lion’s share of economic gains while “laggards” have dragged down productivity metrics. 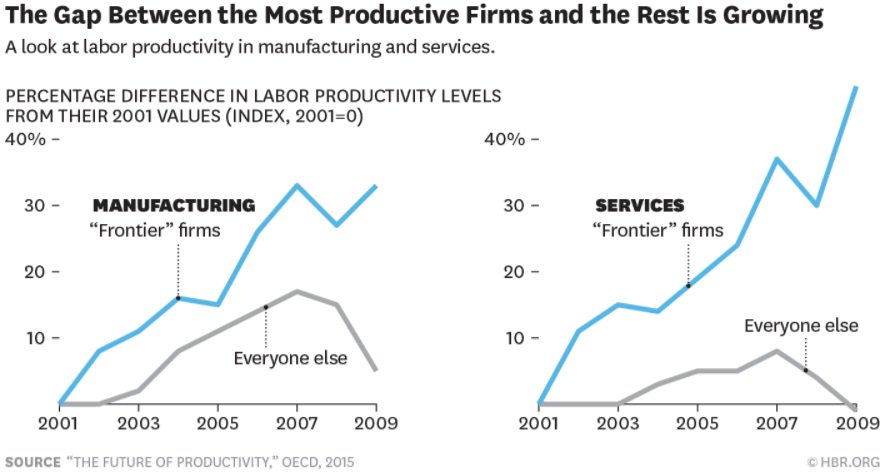 Both studies and some commenters partially denounce this frontier trend because they claim it ultimately returns a smaller share of the economic gains to labor as fewer firms have become more productive with fewer workers, leaving less for the laggards and thus contributing to income inequality.  Techno-pessimists like Robert Gordon suggest that this trend signals a more long term slowdown in economic progress, arguing that most available gains have already been made and hoarded by a few.  However, a closer look at the economy reveals more promise.

Economist James Bessen digs deep into wage data to show that workers at the top end of labor markets with the right skills (mainly ability with computers) have seen large increases in pay, thus validating employer claims that they are seeking good workers in a shortage and willing to pay premiums for the right talent and skills.

In a Peterson Institute Study, the authors retrace the invention of the modern personal computer to show that Robert Solow’s productivity paradox was resolved by investment into technology and the skills to operate it.  Firms which invested properly into this technology and its related skills reaped the gains of the dot com boom.  It took several more years for those technologies to become mainstream and available to all businesses, but few argue that those economic gains made in the dot com boom were bad for American quality of life.

It is likely that the same phenomenon is being witnessed with the frontier trend.  Massive gains in mobile network technology alone have enabled companies the likes of Google, Apple, Uber, Amazon, and others to take massive shares of the market.  The workers and employees who were in the position to get hired at those firms due to their skills with technology are achieving high rates of productivity.  Leveraging technology allows for massive profits with fewer and fewer workers, which means each worker takes home more money, and that’s a good thing! That’s largely how we produce economic growth.

The fact that companies like this are clamoring for talent should tell us that rather than shifting money away from those firms via redistribution, we should be thinking about how to get more firms like them and get more people the skills they need to be valuable to those firms.  It’s faulty economics to suggest we should shift capital away from where it’s being productive.  Instead, we should be more concerned with studying how to help firms and workers catch up to the ever changing frontier of technology that holds such great productivity promise.

The authors of the OECD and MIT study admit that factors such as low regulation, low taxation, high quality education, developed capital risk markets, and business/university collaboration close the gap between frontier and non-frontier firms, meaning that more firms and more workers share in the economic gains.   Bessen’s research shows the skills gap has not yet been closed, suggesting that business can work more closely with both public and private education to produce the labor skills they need and help more workers share in the productivity of technology.

All in all, Americans can be more prosperous than the previous generation by embracing the productivity potential of technology, but some things need to change in order for that to happen.   Government should focus on an attitude of permissionless innovation, low taxation, and low labor market regulation in order to allow for firms to form and utilize their capital to acquire the technology and human capital they need to succeed.