Florida is sitting on a debt bomb that keeps growing despite attempts by the legislature to fix things. The Florida Retirement System provides retirement benefits to over 1.2 million current state and local government workers and retirees. Its financial sustainability is vital for the retirement security of those workers. But current and fast-growing debt in the pension plan and a lack of investment plan contributions puts member retirement security at risk along with the wallets of taxpayers. The longer the debt is allowed to grow, the more expensive it will be to pay off.

Problems with the financial sustainability of FRS go back to the late 1990s. The state legislature enacted changes to the system in 2000, 2011 and 2017 that addressed some issues but created new ones that undermine retirement security and drive up debt. The consequence is a mounting crisis. 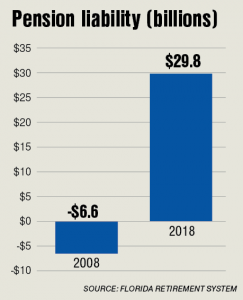 FRS’ unfunded liabilities have grown 300 percent since 2000. During that same time, the state economy and state revenues grew by less than 50 percent. In 2008, the pension system was over 105 percent funded, with a $6.6 billion surplus. By 2018 that financial stability had completely fallen apart, with the system less than 84 percent funded and carrying an almost $40 billion unfunded liability. In just 10 years, FRS racked up a debt of more than $7,100 for every Florida taxpayer. 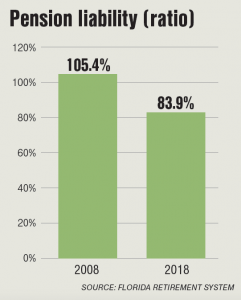 This is caused by four key problems with the current structure and policies of FRS.

Second, the state is not making sufficient employer contributions to the FRS, which shortchanges the ability of investments to grow funding to pay for future retirement costs. Each year, the state’s actuaries calculate how much should be paid in that year’s budget to cover costs for future pension benefits. But the legislature has chosen to pay less in some years, which grows the debt. Moreover, it has chosen a method for paying off the debt that uses a long pay-off period and drives up its total costs—just like paying off a mortgage over 30 years cost you much more in total than paying off the same mortgage over 15 years. The legislature needs to make full contributions each year and adopt a debt payment plan that reduces costs to taxpayers.

Third, the state uses a method of calculating the value of promised retirement benefits that increases risk and makes the real debt larger than what is assumed. In technical terms, the state is using too high of a discount rate to calculate the net present value of future benefits, which is essentially the same as assuming there is some chance the state won’t pay the benefits in the end. Because it is almost 100 percent certain that the state will pay the retirement benefits in the future, FRS should adopt a discount rate appreciably lower than currently used.

These problems are technically easy to fix but politically and financially less so. Given the rising debt for taxpayers and declining retirement security for state workers, the fixes are very necessary.

This column originally appeared in the Florida Business Observer.