The nation’s fifth-largest pension system, the Florida Retirement System (FRS), has $36 billion in public pension debt. The Pension Integrity Project’s latest analysis shows that this debt has grown rapidly in the last decade and FRS has accumulated an additional $6 billion in unfunded liabilities since 2018.

The Florida Retirement System manages retirement benefits for almost 648,000 active members and over 584,000 retirees in the state and is comprised of a traditional pension plan and a defined contribution retirement plan option called the FRS Investment Plan.

Two decades ago the retirement system held a surplus of over $13 billion in assets and stood at 118 percent funded. Today, FRS finds itself $36 billion in debt with only 82 percent of the assets on hand needed to pay out benefits over the long-term, which represents a net change in position of almost $50 billion in just 20 years.

Investment returns falling short of the system’s expectations have been the largest contributor to the Florida Retirement System’s growing debt, adding $16.4 billion in unfunded liabilities since 2008.

The chart below shows the increase in the Florida Retirement System’s debt since the year 2000:

Despite pension reform efforts in 2011 and 2017, structural deficiencies within FRS continue to risk the retirement security of employees and retirees. The 2011 legislative effort reduced retirement benefits for employees and while such a change did lower some costs, it did not fundamentally address why pension debt continues to grow. Similarly, defaulting new FRS members into the Investment Plan in 2018 was a move that better aligned with workforce mobility trends and reduced future financial risks, but it did not address why the system’s pension debt has persisted for a decade.

Bringing stakeholders together around a central, non-partisan understanding of the challenges the Florida Retirement System faces —complete with independent third-party actuarial analysis and expert technical assistance— is crucial to ensuring the state’s financial solvency in the long-term. The Pension Integrity Project at Reason Foundation stands ready to help guide Florida policymakers and stakeholders in addressing the shifting fiscal landscape.

Challenge 1: FRS is Still Not on a Path to Long-Term Solvency

Unrealistic Expectations: Despite the recent change to 7.0%, the Assumed Investment Return for FRS continues to expose taxpayers to significant investment underperformance risk.

Underpricing Contributions: The use of an unrealistic Assumed Return has likely resulted in underpriced Normal Cost and an undercalculated Actuarially Determined Contribution. 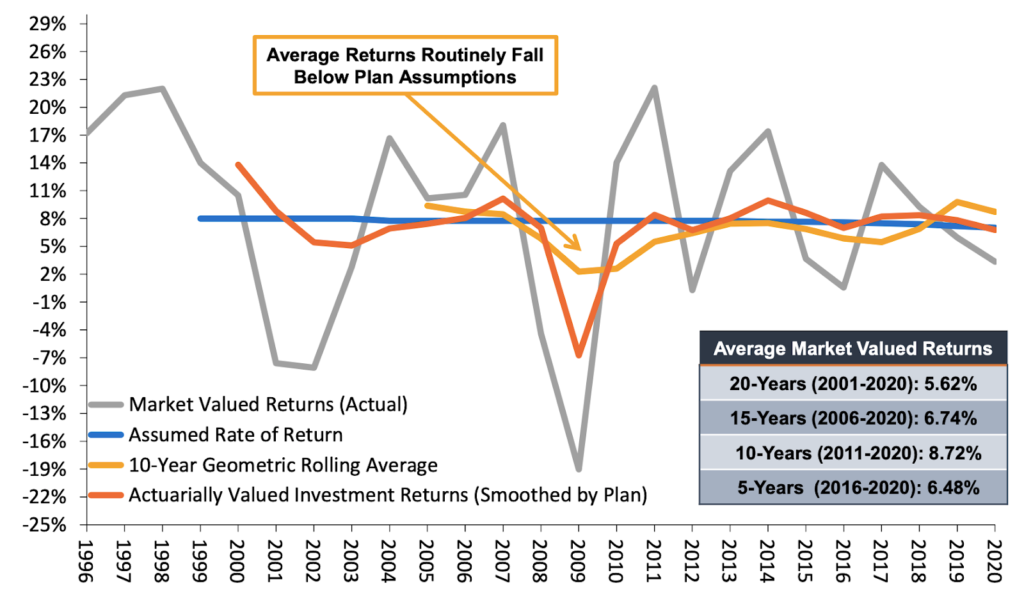 Note: Past performance is not the best measure of future performance, but it does help provide some context to the problem created by having an excessively high assumed rate of return.

The “new normal” for institutional investing suggests that achieving even a 6% average rate of return in the future is optimistic.

Expanding Risk in Search for Yield

How resilient is FRS to volatile market factors?

Statutory rates are more susceptible to the political risk inherent to the legislative process and often result in systemic underfunding, especially when legislatively established rates fall short of what plan actuaries calculate as necessary to ensure funding progress.

Quick Note: With actuarial experiences of public pension plans varying from one year to the next, and potential rounding and methodological differences between actuaries, projected values shown onwards are not meant for budget planning purposes. For trend and policy discussions only.

If you assume FRS will achieve an average six percent rate of investment return over the next 30 years plus experience one financial crisis in this time, analysis shows that the pension plans unfunded liability would spike to $80 billion before the year 2050.

This likely economic scenario would cost the state almost $120 billion more in pension contributions than what they currently plan to spend on the plan.

Seeing as FRS only averaged a 5.62 percent market valued investment return rate between 2000 – 2019, and that we have seen two major economic crisis in the last 20 years, it is reasonable to assume the next 30 years will look somewhat similar.

An additional $120 billion in pension costs would put significant strain on the state budget.

Stress on the Economy:

The “discount rate” for a public pension plan should reflect the risk inherent in the pension plan’s liabilities:

Setting a discount rate too high will lead to undervaluing the amount of pension benefits actually promised.

It is reasonable to conclude that there is almost no risk that Florida would pay out less than 100% of promised retirement income benefits to members and retirees.

The discount rate used to account for this minimal risk should be appropriately low.

Challenge 2: FRS Defined Contribution Plan is Not Built for Security

Employees may choose to receive their account balance at the end of employment as a lump sum or take periodic withdrawals either on-demand or by a pre-determined payout schedule.

The FRS Investment Plan has shown consistent growth since its introduction in 2002.

The Legislature can increase or decrease the amount employers and employees contribute to plan members’ accounts.

Best practice says employers should continue making payments towards their legacy pension debt as if all new hires were still entering the Pension Plan. 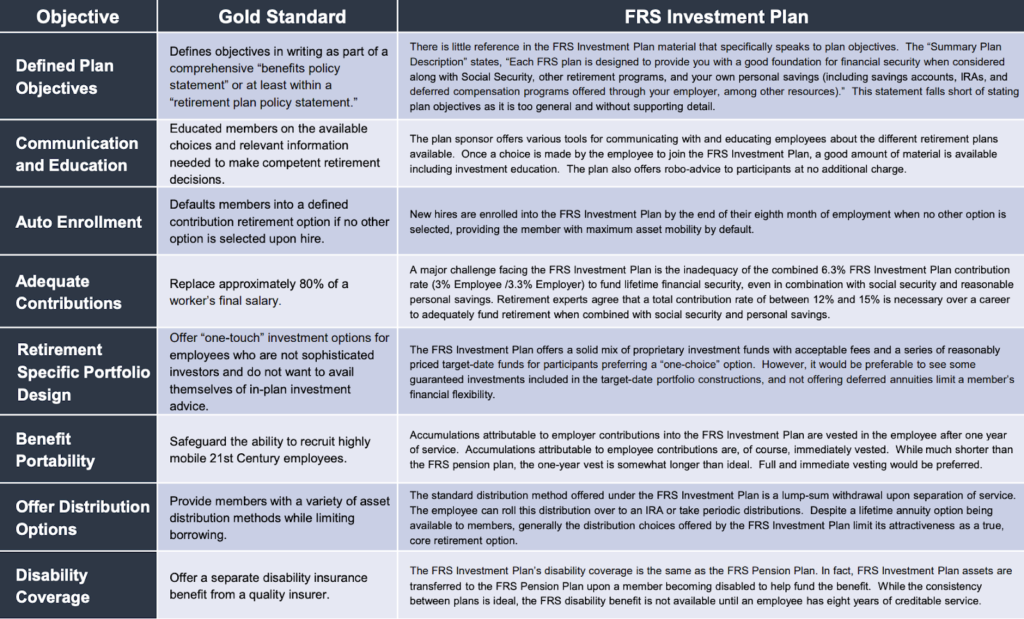 2. Establish A Plan To Pay Off The Unfunded Liability As Quickly As Possible

5. Encourage Use of Target Date Funds

6. Encourage Use of Annuities for Improved Retirement Security