Americans continue to be on the move. According to North American Moving Services, California and New York were losing residents and had some of the highest rates of outbound moves (based on moving truck rental data) in 2018, while Texas and Florida were among the states with highest rates of inbound moves.

Broadly speaking, Texas and Florida tend to have public policies that support a free-market economy, whereas states like New York and California tend to do the opposite. The case can be made that residents seem to be voting with their feet in favor of economic freedom.

While economic freedom varies across states within the U.S., it also varies within states, as my new study published by the Reason Foundation shows.

The “U.S. Metropolitan Area Economic Freedom Index” uses nine different measures of state and local government policies to produce an overall score for each of the nation’s 382 metropolitan statistical areas (MSAs). For purposes of rankings, the 52 largest with over a million residents were examined separately.

In California, for example, San Jose, home to many of the tech companies in Silicon Valley, ranked in the middle of the pack (at 27th), but Los Angeles ranked in the bottom 10 and Riverside ranked last (52nd).

Similarly, in Tennessee, Nashville scored well, ranking as the 6th most free metro area, but Memphis was only 20th.

This variation within states helps explain why some areas within a state can thrive while others struggle. 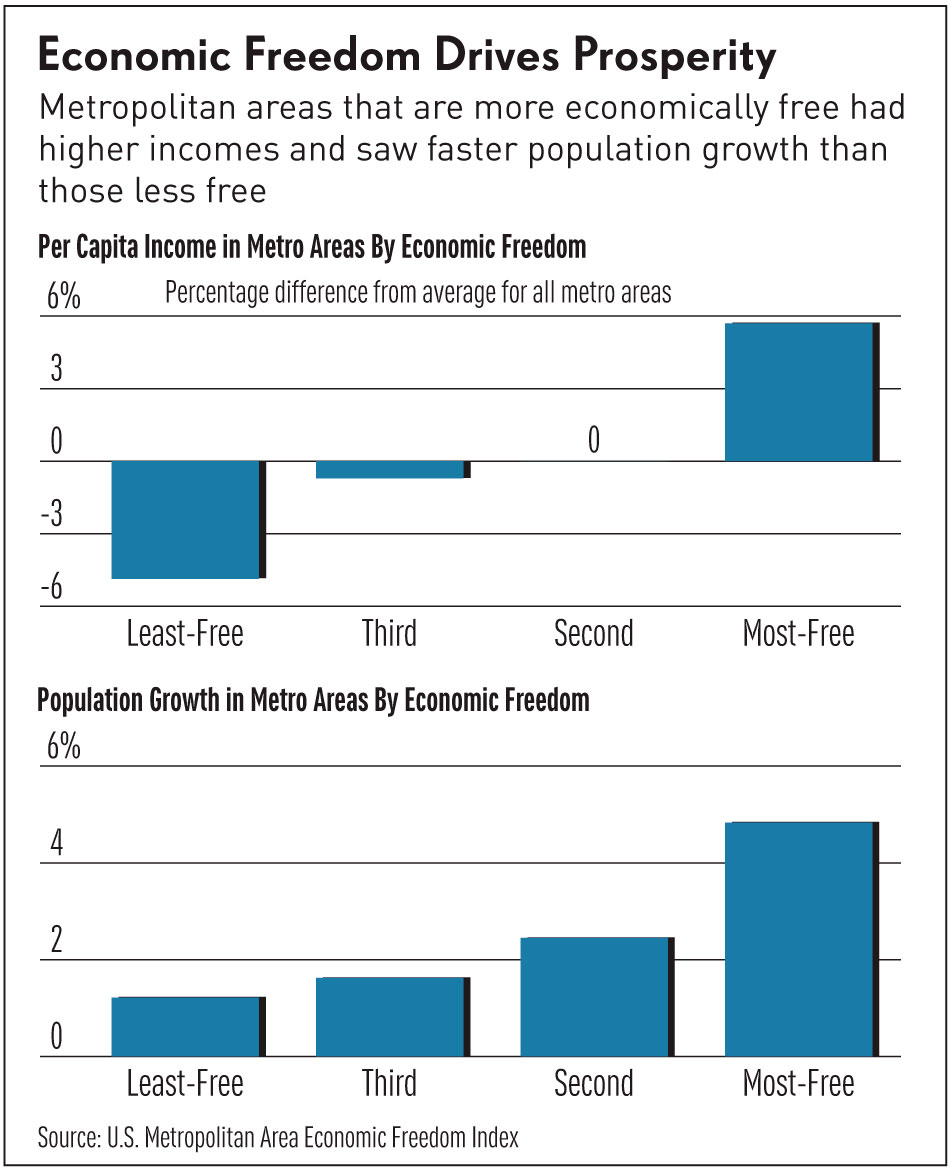 The study shows that population grew four times faster in the freest areas. The most-free areas were also more prosperous, with per-capita personal income 5.7% above the metro area average, while the least free were 4.9% below average.

That means per capita income was nearly 11% higher in the freest areas. (See nearby chart.)

The positive relationship between economic freedom and economic prosperity at the local level is similar to findings at the state and country levels.

Over 200 articles by independent researchers have examined this relationship at the state level using the Fraser Institute’s annual Economic Freedom of North America report.

In one recent study, economists at West Virginia University and Louisiana State University found that a 10% increase in economic freedom was associated with a 5% increase in real per capita gross state product (a measure of the total output of the economy per person).

For lawmakers, this means policy and regulatory decisions may have much more impact than they think.

For struggling local economies, the lesson is clear: Policy changes that support a free-market economy can help slow the exodus of people and businesses seeking freer pastures elsewhere.

But burdensome interventions in the economy may lead to even more people packing their stuff into moving vans and leaving the area.