What matters more for pension fund investments, asset class returns or the asset allocations themselves?

Investment performance plays an important part in making sure that pension plans have enough money to pay pension benefits. For public plans in the U.S., investment returns are even more critical as most pension boards adopt excessively high assumed rates of return and discount rates, which artificially reduce actuarially required contributions. Such aggressively optimistic assumptions thus disproportionately enlarge the role of investment gains in funding benefits. Unfortunately, investment returns for public plans have failed to keep up with the high return assumptions, particularly since the onset of the Dot-com Crash in 2001, and returns differ significantly among plans.

A recent study by researchers at the Center for Retirement Research at Boston College (CRR) takes a look into the variation of returns to investigate why some plans perform better or worse than others. The study examines the period from 2001 to 2016, during which public plans earned an annualized return of 5.5 percent, well below the average return assumption of about 7.6 percent. The returns, however, are far from uniform. CRR finds that the top-quartile plans earned an average return of 6.3 percent, compared to the 4.6 percent average return earned by the bottom-quartile ones.

Size does not appear to be a leading factor in how well a public pension fund’s investments have performed. Larger plans do not perform better than smaller plans, as the top-quartile plans are noticeably smaller, on average, than those in the lower quartiles. 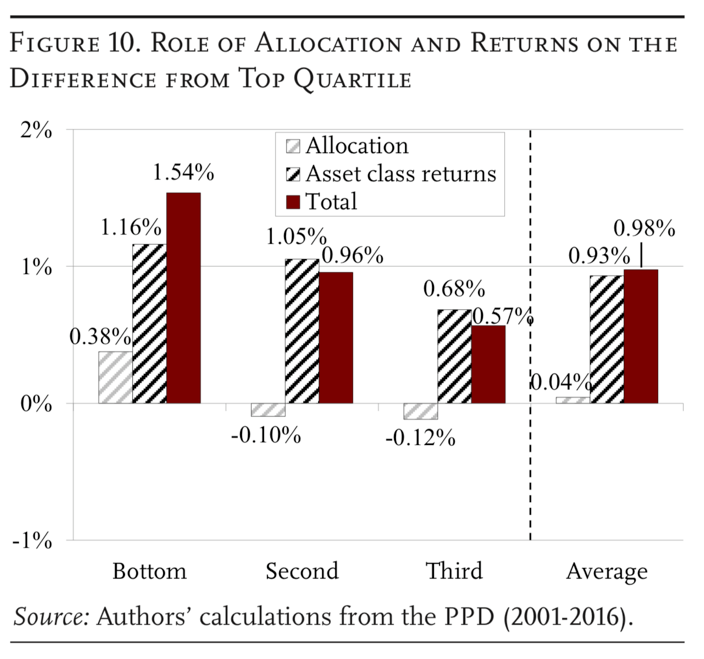 The chart shows that asset allocation explains only a small portion of the investment return differences between the bottom three quartiles of plans and the top performing quartile. Most of the differences are due to asset class returns.

That means plans that have the same share of equities or fixed income may earn significantly different returns for the asset class if their allocations of smaller asset classes within the broad asset category are radically different. If plan A’s equities earned a higher return than plan B’s equities because plan A invested more in small-cap and emerging market equities, should the return difference between plan A and B be attributed to “asset allocation” or “asset class returns”? If we assume that asset class returns are a function of selecting individual assets and/or fees, it seems more reasonable to attribute the aforementioned return difference to asset allocation. The authors note the issue in the study’s endnotes:

Though the authors are aware of the problem, their selection of the broad asset classes doesn’t exactly solve it. This is probably because of lack of data.

The previous caveat aside, the study still offers an important insight: looking at only the broad asset allocation won’t lend us much confidence in assessing a pension plan’s investment performance relative to its peers. One has to dig deeper into these broad asset classes to analyze its investment returns, whether historically or prospectively.