USAFacts, a non-profit founded by retired Microsoft CEO Steve Ballmer, produces an annual 10-K report on federal, state and local government finance and performance. The most recent report, released on April 15, paints a bleak picture of US public sector finances. But further improvements in financial reporting technology may be needed to make Americans aware of the full extent of government red ink.

According to USAFacts income statement, the consolidated public sector had revenues of $5.097 trillion and expenditures of $5.852 trillion in fiscal year 2016, resulting in a net loss of $755 billion.  Meanwhile, the balance sheet shows assets of $19.605 trillion and liabilities of $33.797 trillion, yielding a negative net worth (or accumulated deficit) of $14.192 trillion.

The report uses 2016 data despite the fact that 2018 federal financial statements are already available. But USAFacts relies on the Census Bureau’s Survey of State and Local Government Finances for the non-federal financial data, which is published on a two-year lag. To maintain comparability, the entire report uses 2016 financial data and thus does not yet reflect the impact of increases in the debt and deficit during the Trump presidency.

A look at the latest federal financial statements suggests that government finances have further deteriorated since the end of FY 2016. The federal government reported a negative net position of $19.292 trillion in 2016 and $21.521 trillion in 2018. This $2 trillion increase in federal debt is unlikely to have been offset by state and local governments, whose revenues and expenditures typically run about even.

The biggest federal liabilities are debt securities held by the public and benefits payable to federal employees and veterans, both current and retired.  While the federal government does not recognize Social Security and Medicare liabilities on its balance sheet, it does estimate these liabilities on a separate Statement of Social Insurance, which shows total unfunded liabilities for the two programs of $53.8 trillion in 2018 (up from $46.7 trillion in 2016).

USAFacts reports 2016 state and local pension liabilities of $7.890 trillion versus pension assets of $3.302 trillion, based on calculations made by the Bureau of Economic Analysis (BEA) and reported by the Federal Reserve. Because BEA applies a more conservative discount rate to liabilities than the rates used by most pension funds, USAFacts’ estimates of unfunded liabilities exceed those reported by state and local governments. Since the BEA discount rate is similar to rates used by corporations for their pension valuations, it would seem more appropriate for USAFacts’ purposes.

While accounting for federal and military employee benefits, the USAFacts financial statements do not include state and local other post-employment benefit liabilities (OPEB) because they are not reported by federal agencies. I recently reported that these liabilities totaled $187 billion in California alone, suggesting a national total of $1.5 trillion.

If USAFacts obtained its data directly from state and local financial statements, the organization would be able to reflect OPEB liabilities and reduce the reporting lag it currently faces. Unfortunately, state and local financial data is scattered across PDF files and reports issued by tens of thousands of public agencies. Gathering, extracting and consolidating this information would require extensive resources.

The best way to reduce this data collection burden is to require state and local financial disclosures be produced with machine-readable documents using technology like Inline eXtensible Reporting Language (XBRL). The California State Senate is considering a bill, SB-598, which may lead to this transition in the Golden State.

Since corporate financial statement filers already use XBRL technology, it seems like a good fit for USAFacts’ financial reporting. To stimulate further discussion of XBRL, USAFacts included an Inline XBRL version of key financial statements from its latest 10-K report, as can be seen below. 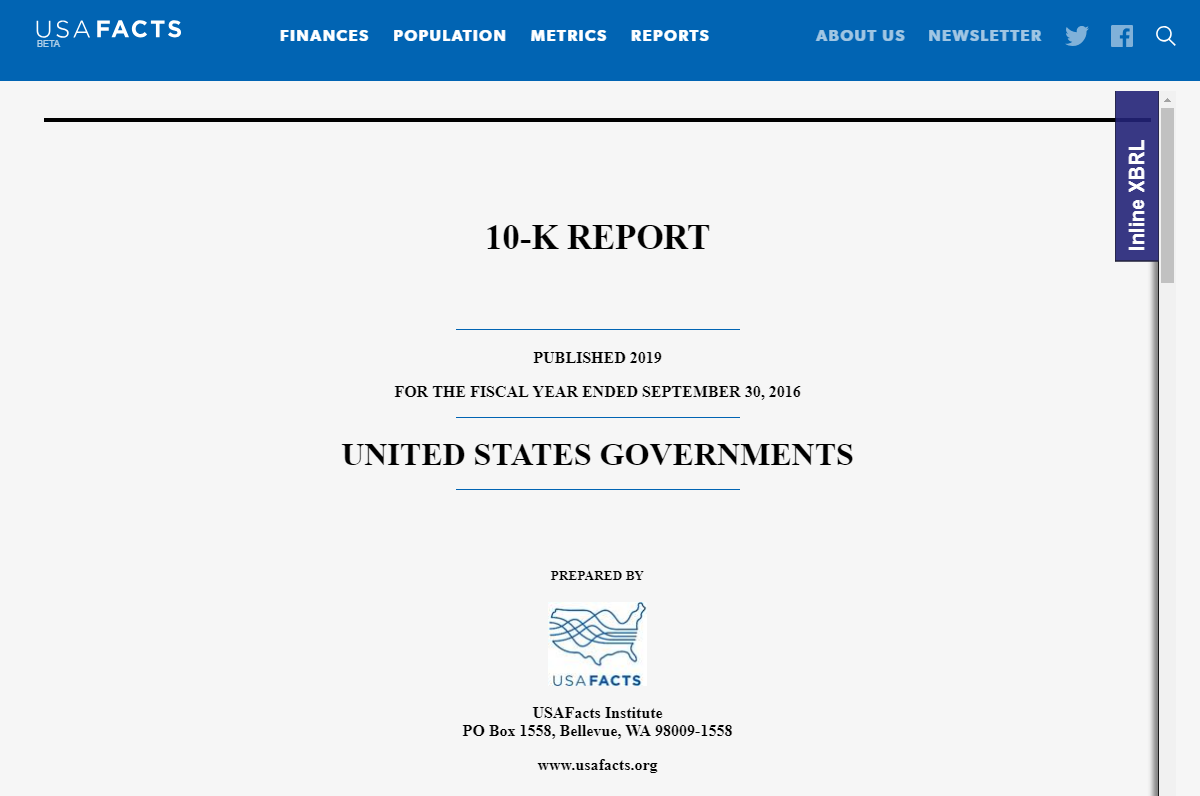 USAFacts’ 10-K reports for the US public sector provide a valuable perspective on government performance. The latest report highlights the fiscal unsustainability of current policies, but to fully comprehend our current level of indebtedness, financial reporting technology must be improved.