Pension plans around the country have been sounding awfully happy about their really bad investment returns for the current fiscal year.

In July, CalPERS’s chief investment officer said he was “proud” of the pension funds investment returns because 0.61% was “positive performance.” And last month, Florida’s top pension plan investment manager was singing the praises of his fund that managed to wring out its own 0.61% return on investments this fiscal year: “The positive net returns show the value of diversification, our success in controlling costs, and the prudence and patience of sticking to the fund’s long-term investment plan in a challenging year,” said Ash Williams, executive director of the State Board of Administration, which manages investments for the Florida Retirement System (FRS).

There is nothing particularly special about a pension plan’s return being above a threshold of 0%, or avoiding a negative sign getting attached the annual rate of return figure. Like all defined benefit plans, FRS has an assumed rate of return that is used in calculating how much should be contributed to the plan each year. That assumed rate is the average return the plan expects to get over a long-term period of time, i.e. a 20-year to 30-year time horizon. For FRS to average at least 7.65%, the plan has to have a number of years with returns above that benchmark to make up for the years where returns underperform a 7.65% threshold.

In this context — needing to hit an average of 7.65 percent for long-term solvency — the year’s investment returns simply being in positive territory isn’t very important. Whether a return is -1%, 0% or 1% in any given year isn’t all that different for the long-term average. If FRS had reported a return of -0.61% it wouldn’t have made much of a difference for the plan’s long-term goal of a 7.65% return relative to a 0.61% return.

Yet, nowhere in Mr. Williams’s recent presentation to the Florida governor and his cabinet was this emphasized.  In fact, The News Service of Florida in reporting on the FRS investment returns, frames the 0.61% return as one that “keeps alive a streak” of positive investment gains for the seventh straight year in a row.

This is an utterly meaningless “streak.”

If we want to look at the streaks for FRS, the point of measurement should be the number of years they’ve returned above or below 7.65%. The figure below shows a 40-year history of FRS investment return data to look for such streaks.

Looking at the last four decades, the FRS rate of return has surpassed the 7.65% assumed return 24 times. And within that context, the longest “streak” of gains above the targeted rate is six years — back in in the mid-1990s. I’m not exactly sure how meaningful such streaks are, but if anyone wants to sing praises about a streak, this would be the kind to think about.

What I am sure about is that even these streaks don’t tell us much about the future.

Today’s markets are not like the 1990s. In fact, the trend in large gains is getting smaller over time. There have been only eight years with returns above the targeted rate in the past 15 years, and only five good years in the past 10. The smaller “streaks” of strong investment returns reflects the change in markets, and the new normal in what are reasonable expectations for investments returns.

And that is going to take a lot of big investment years. Just cruising over a 0% threshold isn’t going to cut it.

Unfortunately for pension plans with assumed rates of return over 6% (which is nearly all of them across the United States), yields on equities and bonds are forecast to be considerably lower over the next few decades relative to the past. For example, according to McKinsey most recent forecast, returns on U.S. equities are likely going to be 20% to 50% lower over the next 20-years than the last 30.

In his report to the Florida governor, Mr. Williams did accurately note that with recent market trends “it’s a very different world.” However, because it is so different than the era when a pension plan could just invest mostly in bonds and get an average return of around 8%, it is inappropriate to describe 0.61% returns for a fund with a 7.65% targeted return rate as a “success.”

Two straight years, with returns below the targeted average — and three of the past five — should be taken as a warning sign that Florida, California, and all states with defined benefit or cash balance pension plans need to do something different. At a minimum, pension plans should consider lowering their expectations and risk exposure, adopt lower assumed rates of return, and ensure they are making the necessary contributions to fund the pension obligations being placed on the shoulders of taxpayers. 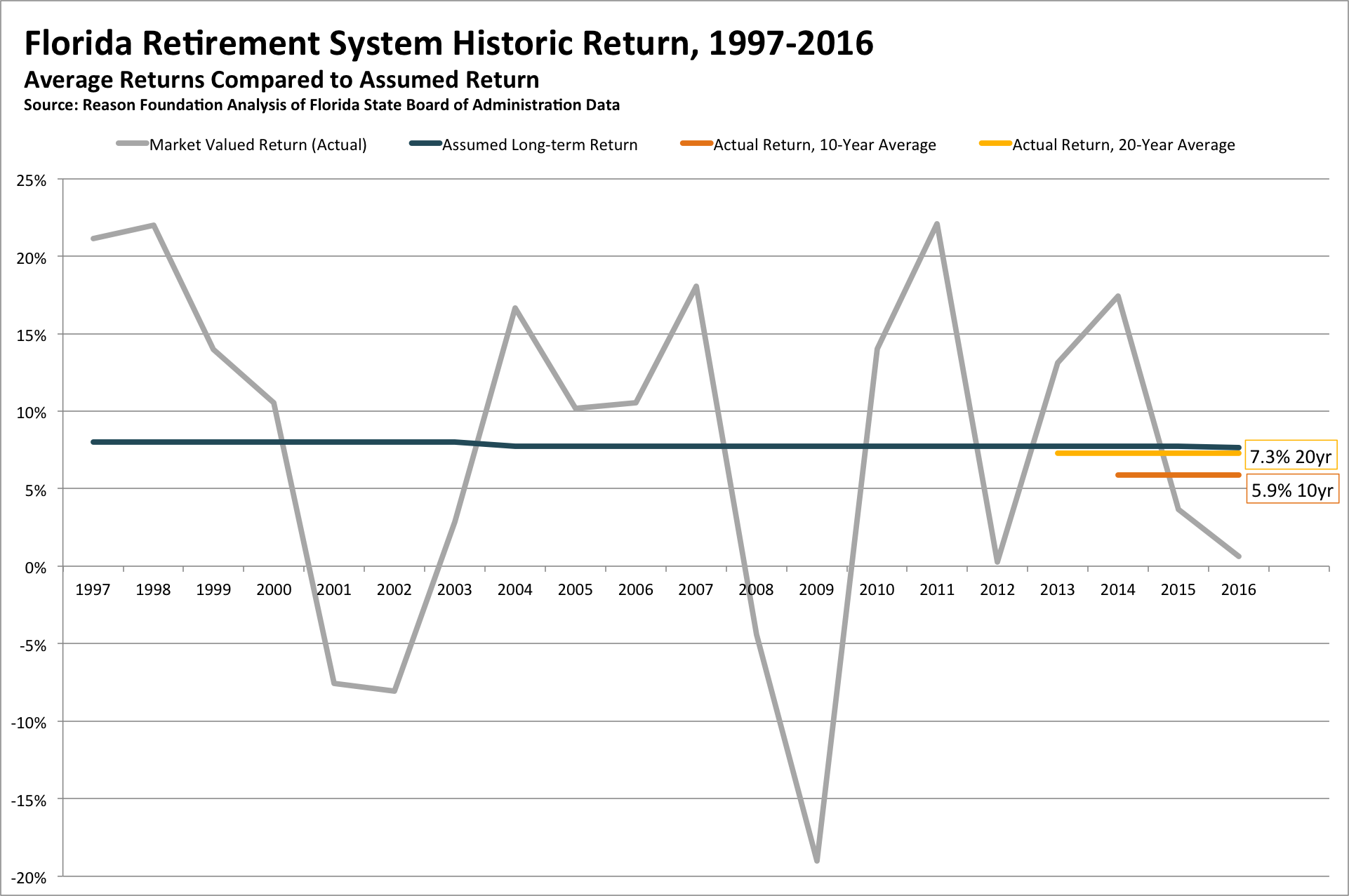 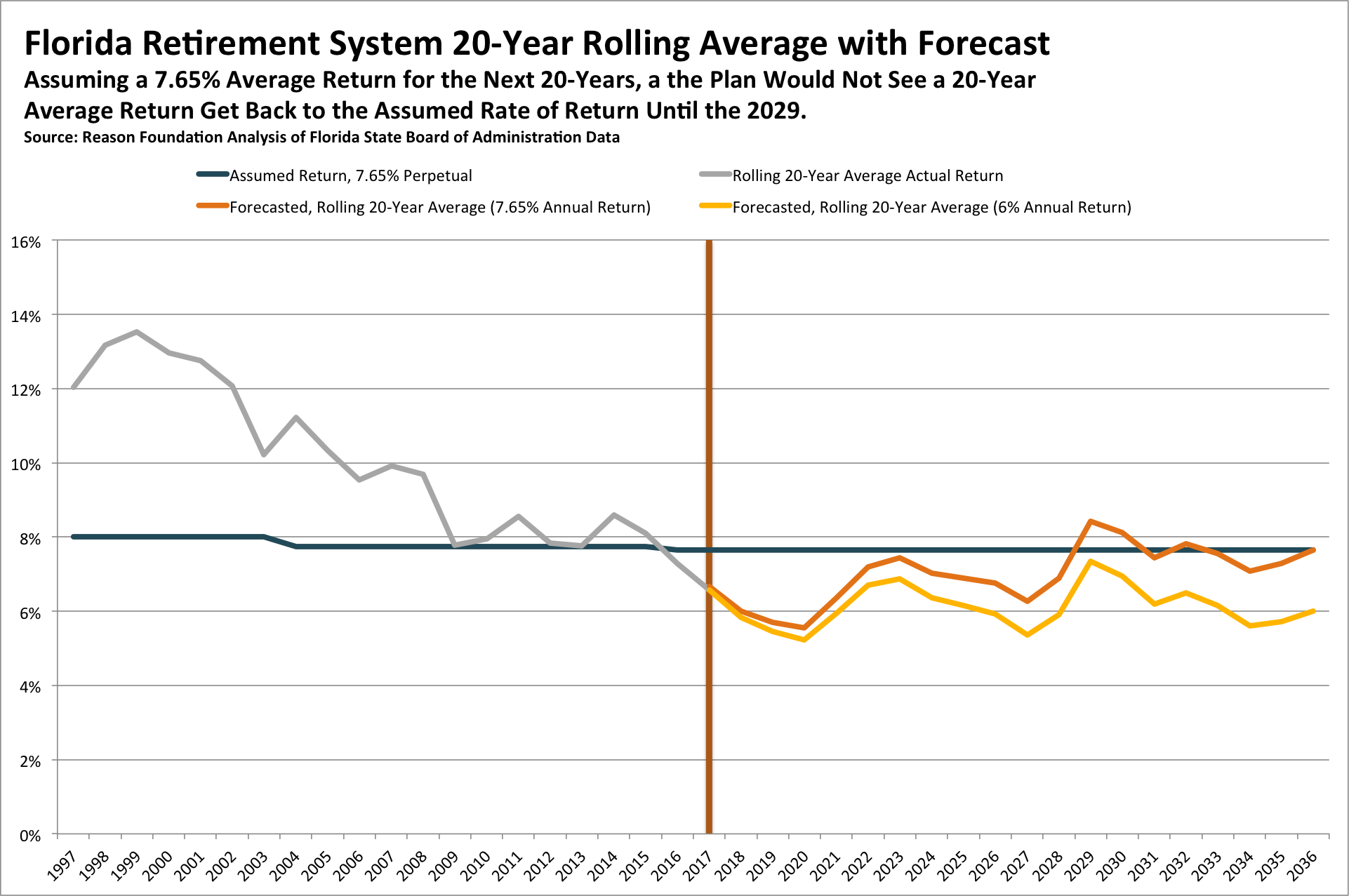