While most of the private sector has embraced the defined contribution (DC) pension model, the public sector is still largely using unwieldy defined benefit (DB) plans. This is also true for members in the United States military, whose retirement system faces massive financial challenges and is an obstacle in human resource retention. However, if a recent report by the Military Compensation and Retirement Modernization Commission is any indication, the pension system may see positive changes in the near future which make it an affordable, adequate and sustainable option for both the military and the taxpayer.

As a typical public DB plan, the Military Retirement System has problems not only in terms of costs, but also in terms of benefit distribution. The system was only 31 percent funded in 2012, with the funded ratio having never exceeded 35 percent in the last two decades. The latest data revealed an unfunded liability of almost $1 trillion. Despite the enormous benefit promises, the commission’s report finds “83 percent of all enlisted personnel and 51 percent of officers receive no retirement savings for their service.”

The reason for this disparity is that the system relies on 20-year “cliff vesting,” where only those who complete 20 years of service will receive any benefits. This highly back-loaded structure channels most benefits to long-tenured members while ignoring short-term, typically young, service members. Meanwhile, the US military is increasingly made up of service men and women born after 1980. Recent studies show that this younger generation are not locked into long-term careers and tend to change jobs often, thus preferring flexible retirement options, rather than the uncompromising DB plans favored by older generations. Additionally, with Americans living longer and a younger, more mobile workforce, reform is needed to create a more efficient and equitable system.

To tackle these challenges, the commission recommends a hybrid system that consists of a trimmed-down DB plan, using a Thrift Saving Plan (TSP) model that has been successful in other federal government jobs. It would also add continuation pay to provide midcareer retention incentives. The new system would be mandatory to all newly hired members, but current members would have the option to opt in. Under the reform plan, the DB plan’s multiplier would be reduced from 2.5 to 2.0 percent, effectively reducing the pension benefit for 20 years of service to 40 percent of pay from the current 50 percent. Newly hired members would be automatically enrolled in the TSP and would contribute 3 percent of their basic pay to the DC plan, with the government contributing 1 percent upon their service entry date. After two years, the members would be vested in their TSP and the government would start matching the member contribution up to 5 percent. The members would be allowed to opt-out of the TSP at any given time but would be automatically reenrolled in the following year.

The commission’s report finds that the proposed reform should not only improve retirement benefits for military members – especially the younger, more mobile members – but also generate long-term savings. As shown in Figure 8 in the report, a typical enlisted member who contributes 3 percent of his/her pay to the TSP account would be expected to have $217,131 in government-sponsored assets after 20 years of service under the proposed reform, compared to $201,282 under the current system. 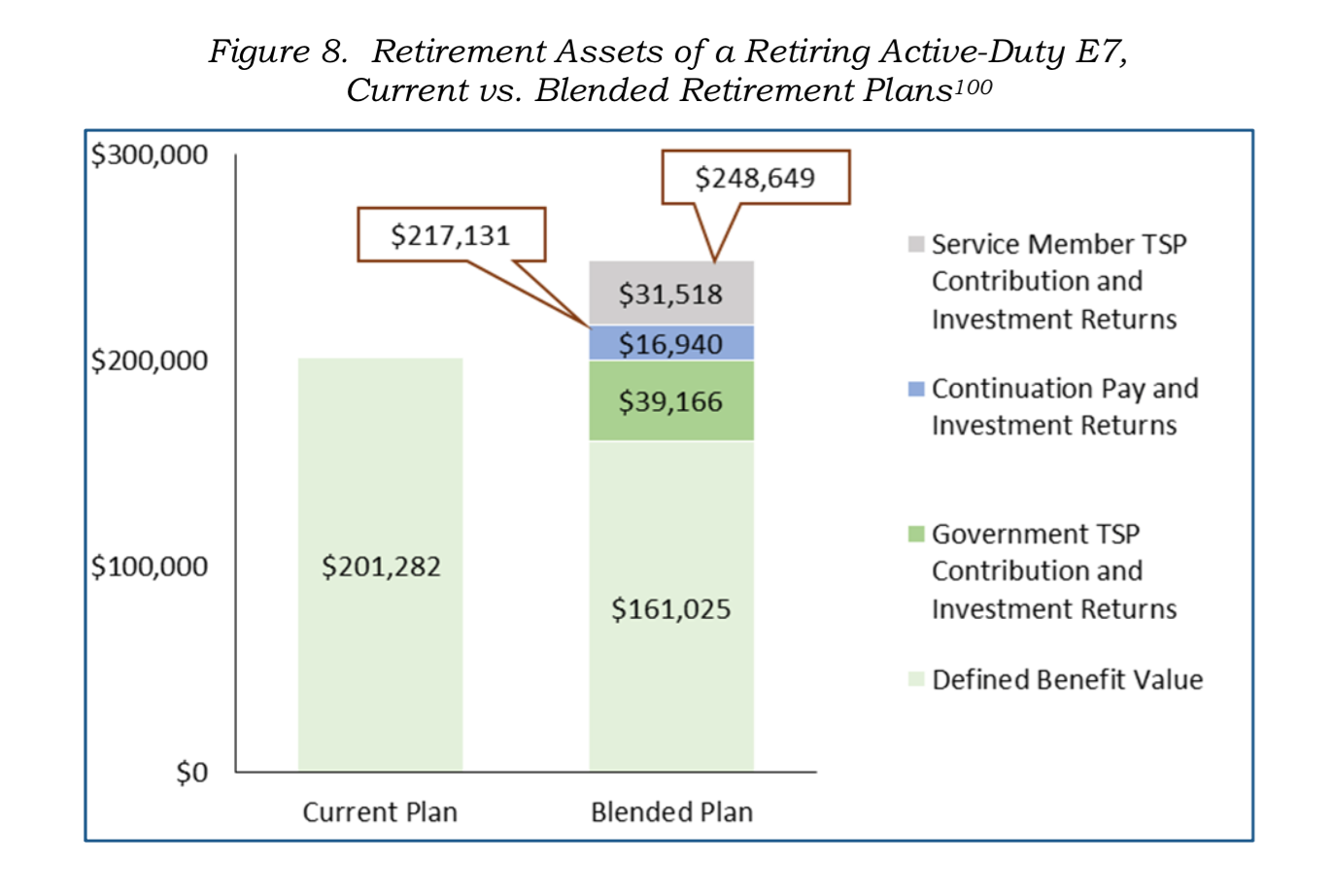 Most notably, the new system would provide substantial benefits to the majority of military members, who do not reach 20 years of service allowing them to vest in the DB system. For example, an enlisted member who contributes 5 percent of pay to the TSP and leaves the job after 8 years of service would have a value of $92,408 in government contributions at age 67. The same member receives no benefits under the current system.

The commission estimates that the retirement reform would, in the long run, save about $4.7 billion in annual federal outlays. This cost reduction is the net result from decreases in DB benefits and increases in TSP contributions and continuation pay. The saving estimate is quite consistent with the finding of a recent study conducted by the RAND Corporation, which finds that a similar reform would bring about $1.8 to $4.4 billion per year in steady-state cost savings. While more could be done regarding the structural reform of the military pension, the commission’s proposal, if implemented, would be a step in the right direction.