Public sector pension plans across the U.S. have begun reporting their investment returns for Fiscal Year 2018. And while most plans obtained healthy gains, funding pensions for state and local employees still remains a challenge, in no small part because of actuarial practices and overly optimistic investment return projections.

Most public pension plans are reporting healthy investment returns this year. Returns on assets provide the bulk of pension revenue, so this is good news for all stakeholders. Annual returns at or above the assumed targets get a public pension plan on track to make good on its future pension promises, even if for just a year. Conversely, annual returns below the expected rate of return mean that the fund will either need to make up the difference with returns above the target in the future or chip in additional contributions.

The “Pension Funds Return Tracker,” along with other sources, offers some examples of 2018 pension plan returns, relative to their assumptions:

For what it’s worth, this year’s results, along with a 2017 market rally, show that not-so-good periods can transition into bright years for states and municipalities concerned over the growing pension contributions. A recent study by Wilshire Consulting reinforces the point that stellar returns are helping provide some boost to the solvency of the public pension plans.

It is worth noting, however, that even accounting for the positive gains in 2017 and 2018, many public pension plans’ experiences would not stack up against their own interest rate assumptions over the past few decades. The Georgia Teachers Retirement System, for example, achieved a meager average of 5.7 percent returns (geometric mean) over the past 18 years (2001-18). The Arkansas Public Employees Retirement System’s (APERS) actual returns averaged out to just 6.51 percent over the last two decades, while TRSL returned 6.5 percent, on average, over the same 20 years.

These averages would certainly vary depending on the historical time period used (as seen per the following graphs). But, regardless of whether looking at 10, 15, or 20 years, we would generally see consistent underperformance, which should be concerning to stakeholders involved in the public pension discussion.

As a testament to long-term underperformance, for each of these three pension plans, the 10-year rolling average return is below the assumed return over an extended period. 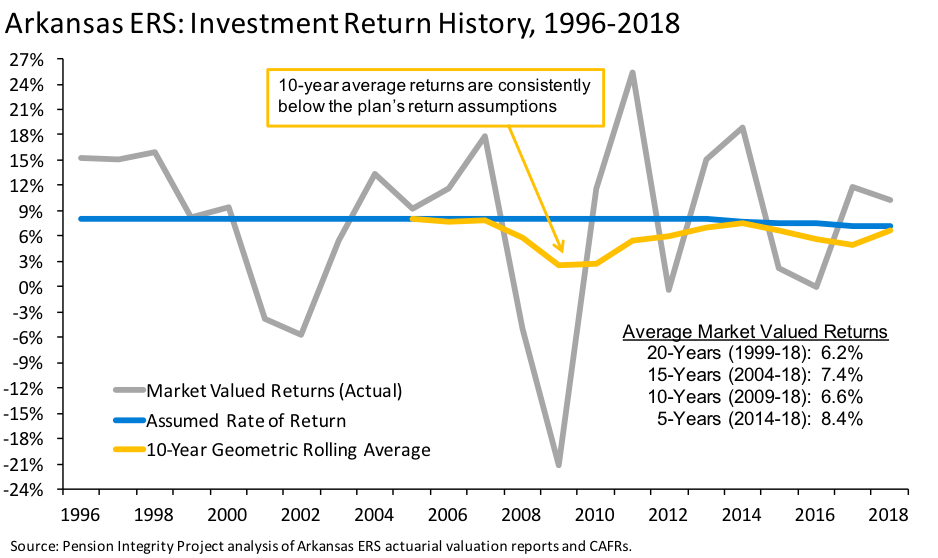 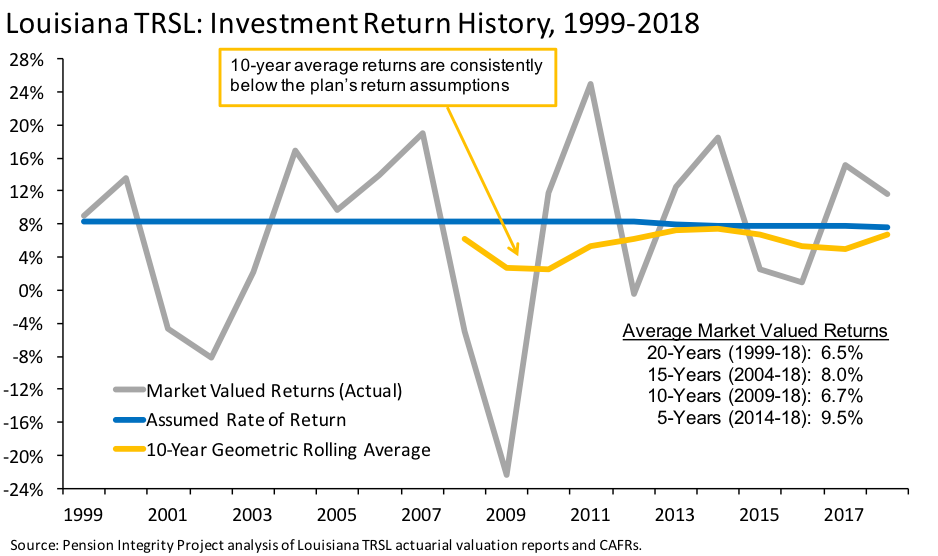 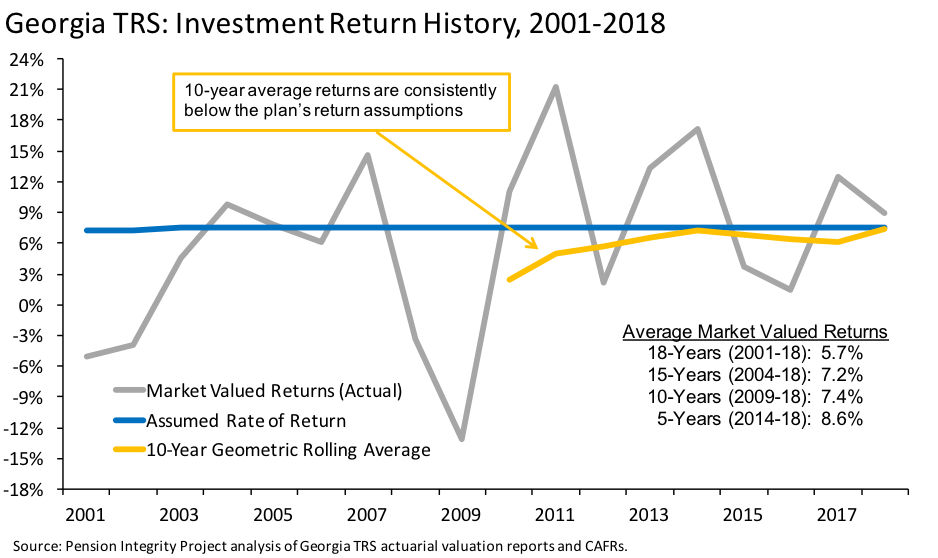 This matters because, as rightly pointed out by Becky Sielman, author of the Milliman 100 Public Pension Funding Index, interest rate assumptions carry greater long-term implications for publicly funded pensions. That is, as public pensions are promised decades in advance, what really matters is the ability, on average, to meet long-term investment return assumptions – as opposed to what happens to returns in any specific year.

“We probably want to temper our enthusiasm when we have a year or two years of strong returns because one thing we know for certain is that there will be challenging years,” said Steve Foresti, Wilshire Consulting’s chief investment officer, in a timely Wall Street Journal piece.

This speaks to yet another factor for tempered expectations. Earlier this year, we noted that major financial advisory firms, including J.P. Morgan Asset Management and Vanguard Group, reaffirmed the so-called “new normal” of a lower-yield environment going forward. Meanwhile, “[m]any investors still have relatively high return targets for a low-return world,” according to BlackRock.

The healthy gains in 2017 and 2018 would, therefore, serve as an opportune moment for publicly-funded pensions to consider lowering their rate of return assumptions, thus safeguarding themselves from future investment return and contribution rate volatility.

Yet another reason to take an individual annual investment return figure with a grain of salt is the so-called “asset-smoothing” technique used for funding purposes by virtually every public pension plan in the country. That is, governments stabilize annual changes in contribution requirements by recognizing investment gains and losses gradually, usually over 3 to 5 years. Mixing a portion of investment gains or losses in any given year with experiences in other years allows to average or smooth out the volatility in contribution requirements from one year to the next.

As such, publicly-funded pensions can expect the 2017 and 2018 investment gains to only partially boost their fiscal health.

Other reasons to be cautious include the ongoing trade disputes and structural flaws of the labor market, both of which could curb U.S. economic growth. All the while, the flattening yield curve and overgenerous company evaluations might be bringing additional volatility into future investment returns.

Making full annual contributions and continually adjusting investment return expectations are prerequisites to keeping public pension funds solvent and ensuring that pension benefits are financially sustainable for state and local governments going forward. If anything, the recent market rally, along with the volatile, but positive, first half of 2018 should be best perceived as some relief to help offset the abysmal 2015 and 2016 investment returns—but not much more than that.