Every year, the Florida Retirement System (FRS) holds the Actuarial Assumption Conference (AAC), a meeting of pension plan managers with the statutory authority to set the actuarial assumptions used to evaluate the state’s public pension plan. Over the past few years, the ACC has set assumptions that are significantly higher than the levels recommended by the plan’s third-party consultancy actuaries (Milliman).

In 2018, the ACC implemented an assumed rate of return of 7.4 percent, well above the 7 percent Milliman recommended expecting from FRS’ investment returns. The decision by FRS to reject the suggestion of its own actuarial advisors is extremely unusual in the world of pension management. And differences like these prompted Milliman actuaries to issue several rare and unusual warnings within the system’s annual actuarial reports over the last several years. Millman wanted to go on the record stating that the optimistic investment return assumptions being made by FRS were not professionally defensible.

Adopting an assumed rate of return that is too high can result in a significant overvaluation of the funds that the retirement system will have available to provide the pension benefits already promised to Florida’s public workers. Similarly, using that same figure as the plan’s discount rate—a common practice—can lead to undervaluation of the system’s liabilities. Put simply, the decision to adopt overly-optimistic assumptions makes the Florida Retirement System’s funding status look better than it actually is. Even worse, this puts the fund in a position of unnecessary risk.

In an overdue but positive move, the 2019 ACC recently agreed to lower the FRS assumed rate of return by 20 basis points—from 7.4 percent to 7.2 percent. This brings FRS closer to alignment with the plans’ consulting actuary, but the assumption remains still 20 basis points above the Milliman 2018 recommendations of 7 percent.

The lowered assumption for expected investment returns resulted in the recognition of $4.8 billion in additional actuarial unfunded liability causing FRS’ pension debt to rise from $29.8 billion to about $36.7 billion. But the move improves the pension system’s resilience to poor market performance (plans with a lower return assumption have a higher probability of matching or exceeding their assumed long-term investment returns).

Although the change made by the ACC is welcomed and warranted, a recent Reason Foundation analysis suggests that a 7.2 percent assumed rate of return is still well above reasonable performance expectations. Employing a comparative analysis (see figure 1) based on the capital market forecasts of several major financial advisors (JP Morgan, BNY Mellon, BlackRock and Research Affiliates), and applying their expected returns to the asset allocation of FRS, the prospects for achieving a long-term 7.2 percent return seem unlikely at best. Reason’s analysis suggests that pension investment returns over the next two decades are likely to hover closer to the 6 percent range, generally speaking. 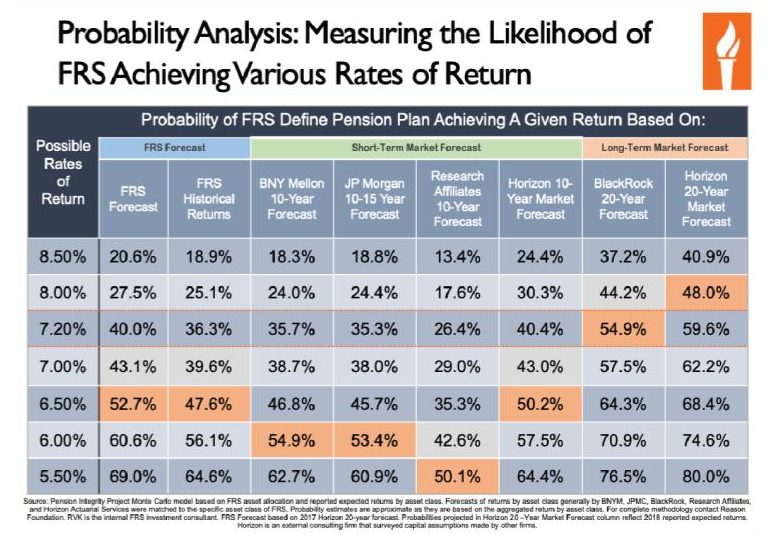 The analysis suggests FRS is likely to fall well below the plan’s historic assumed return over the next decade, which means the current policy exposes the system to the considerable risk of underperforming investments. The system’s actuaries forecast FRS has just a 40 percent probability of meeting its new 7.2 percent ARR, meaning the system is far more likely than not to miss the mark.

Long-term projections appear more optimistic than short-term projections generally due to a speculative assumption that, absent any certainty at all about market returns 20-30 years from now, FRS investment gains will revert to their historical mean—an increasingly unlikely prediction given the “new normal” investment environment. Even in those more optimistic long-term forecasts, the new 7.2 percent assumed rate of return has barely more than a 50/50 chance of proving accurate beyond 20 years. It should go without saying that investment return forecasts for the years 2039 and beyond are highly speculative, and there is no crystal ball to suggest a reversion to the mean that far away in time.

The disconnect between what is assumed and what actual experience has been, and likely will continue to be, is a significant problem for FRS. When pension funds fail to meet investment assumptions, unfunded liabilities rise. Underperformance inevitably leads to an underfunded system. In fact, missing the mark on its assumed rate of investment returns has added $17 billion to FRS’ unfunded liability over the past decade.

The Florida Retirement System is taking a small step in the right direction by lowering the rate, but the assumed rate of return for its investments continues to be overly optimistic and is likely to continue to add to the state’s growing pension debt.

Update: The original title of this post was, unfortunately, ‘Florida’s Pension Debt to Rise As It Lowers Assumed Rate of Return to More Realistic Levels,’ which is technically an oversimplification in that it makes it sound like the lower assumption creates more pension debt. Like an iceberg, pension debt is whatever it is—the grand sum of all individual pension liabilities paid out which is only ever known with certainly once a member is no longer receiving benefits. Hence, actuaries make estimates that act as the water line—reported pension debt as determined by the old assumed rate of return is above the line but there’s really more below.