Pennsylvania’s State Employees Retirement System (SERS), one of the two largest pension plans in the common wealth, is not very healthy. Based on its own assumptions, which are favorable, the plan is only 59 percent funded, leaving an unfunded liability of $18 billion. A more proper valuation of the debt using a risk-free discount rate points to a funded status of 35 percent. These facts suggest the vital need of pension reform, which would move the system away from the traditional defined benefit (DB) design to a more sustainable model that can be fully funded. Many people do not welcome such a change due to concerns about retirement security. Policy makers should ask whether SERS’s current DB system provides enough retirement security for the public workforce. They might find their answer in the recent study by the Urban Institute. 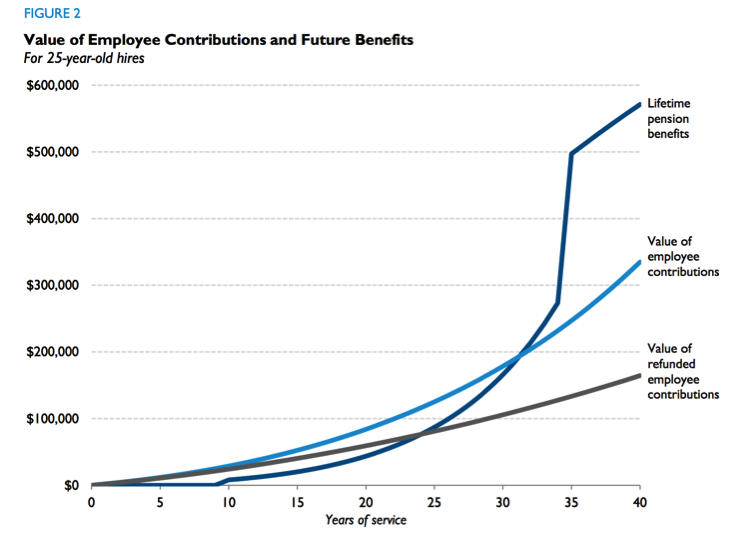 The projection of lifetime benefits provides a clearer picture. As shown in Figure 2 above taken from the study, a typical 25-year-old hire receives no pension benefits before completing 10 years of service, which is the vesting period. But even after being vested, the employee is better off taking a refund than waiting for the future pension if he or she has less than 25 years of service. The refund, however, is credited with only 4 percent, much less than the rate of return assumed by the plan. Those 25-year-old hires who complete 25-32 years of service are better off collecting a pension than taking a refund, but the pension value is still worth less than their contributions combined with investment returns. Only after 32 years of service do 25-year-old hires get pension benefits worth more than the value of their contributions. From that point onward, the pension value rises quickly and spikes in year 35.

The projection shows a prominent feature of the SERS’s DB plan: the plan provides modest pension benefits to short and medium-term employees while heavily rewarding long-term workers. This “backloaded” benefit structure essentially has younger and shorter-tenured employees, many of whom serve for decades in state employment, subsidize the pensions of longer-tenured counterparts. Given the fact that most Pennsylvania state employees complete less than 25 years of service, the benefit distribution does not work to the benefit of the majority of the workers. In fact, 76 percent of state-financed pension benefits go to only 25 percent of employees. According to the Urban Institute report card, the plan receives a “C” for rewarding younger workers, an “F” for short-term employees’ retirement income, and a “D” for promoting a dynamic workforce. The plan ranks as the third-worst plan in the United States for covering newly hired general state employees.

To the modern mobile workforce, traditional DB plans do not provide satisfactory retirement benefits as many believe, and the Pennsylvania’s pension plan is no exception. Other pension designs such as defined contribution, hybrid, and cash balance plans are capable of bringing greater retirement security to the majority of workers, thanks to their portability and ability to accumulate pension benefits more steadily over time. Studies have shown that most public workers in states such as Kentucky and Rhode Island will fare better after their pension reforms, in which the traditional DB systems are replaced by a hybrid or a cash balance plan. Pennsylvania therefore should embrace pension reform, not only for its fiscal sustainability, but also for the benefit of its employees.