The Pennsylvania Public Pension Management and Asset Investment Review Commission recently released its recommendations for the commonwealth’s two largest public pension systems — the Pennsylvania Public School Employees’ Retirement System (PSERS) and the State Employees’ Retirement System (SERS). The funding ratios of the two plans are 56.3 percent and 59.4 percent respectively, which means the pension systems currently hold a little over half of the funding to pay for benefits that have been earned. While policymakers have embraced some major pension reforms in recent years, additional actions could further reduce the risk that the current pension debt of over $60 billion will continue to crowd out other public services.

Among the major savings opportunities highlighted in the report is the cost associated with active management of the pension funds’ investment portfolios. Specifically, the report points out that “…it is estimated that total fees, revenue share and investment expense for PERS in the fiscal year 2016-17 were greater than all employee contributions to the system during the same period.”

So, all that hard-earned money that members are contributing to the system are enough to cover the expenses associated with management of the pension portfolio. On the employers’ side, final contributions, comprised of pension rate and health insurance rate were at 29.2 percent and 32.9 percent of payroll for PSERS and SERS in 2017, skyrocketing from 5.72 percent and 4 percent, respectively, in 2008.

As part of cost-saving measures, the commission recommends to fully index all public market investment in both retirement systems. The rationale behind this is that, in the long term, risk-adjusted index funds outperform actively managed funds. Index funds are cheaper to manage – they do not have fees associated with active fund management, thus reducing the total bill.

Another recommendation targeted at reducing the cost is consolidating the two plans under one office in order to leverage the combined size of the two retirement systems. 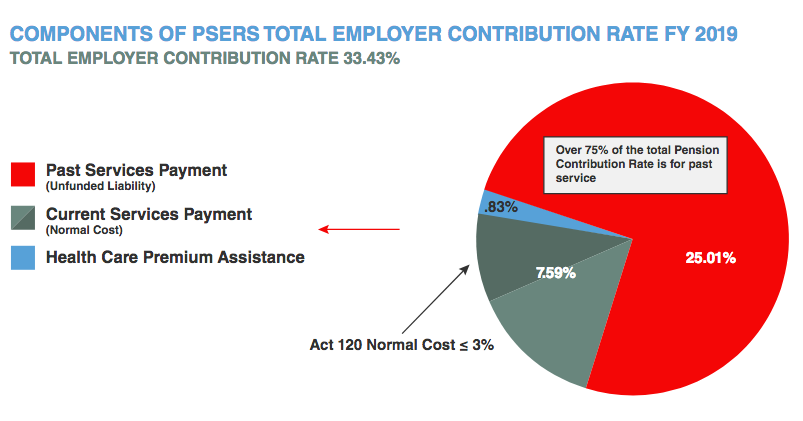 The report also points out that taxpayers are largely paying for promised benefits from the past that ended up costing more than expected, with 75 percent of the total employer pension contributions going to “past service payments.” These amortization payments are government funds that otherwise could have gone toward improving existing services, salary increases, or other taxpayer priorities.

As one of the top priorities for both retirement systems, the commission mentioned “maintaining full payment of the annual actuarially determined contribution (ADC).” It is critical for the plans’ fiscal health to pay the ADC—which consists of pensions benefits accrued in the current year (normal cost) and an amount to pay the unfunded liability (pension debt)—in full each year. Each time the plan fails to make the full annual payment, the amount of unfunded liability and the interest accrued on that debt grow. PSERS consistently failed to pay the full ADC for a decade (2005 to 2016, see figure below), which was well below the rates paid by other public plans. As the report notes, “Without full annual funding, none of the following recommendations will be sufficient to ensure the availability of retirement benefits for future generations of public servants.” 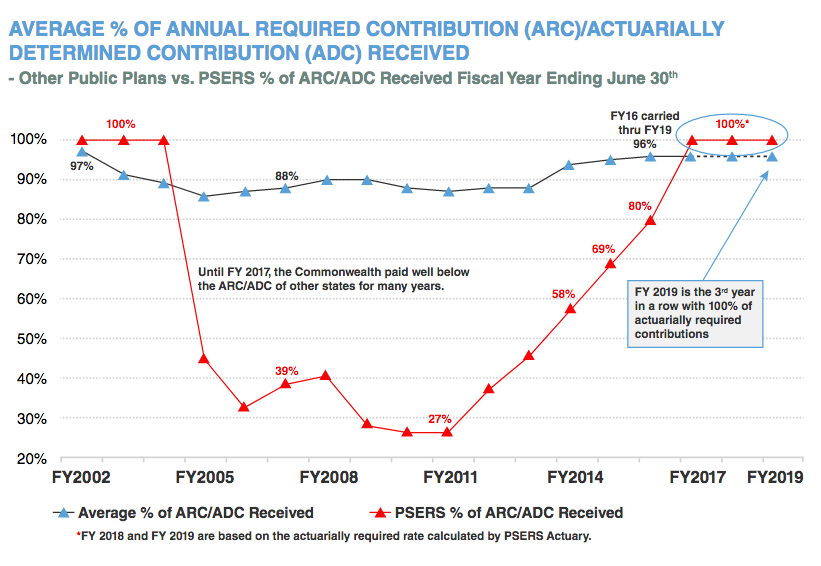 The commission also recommends improving the plans’ transparency, as it pertains to the disclosure of data, analysis, and processes. Transparency is important for public pension plans since all stakeholders—employees, taxpayers, residents, and property owners—in the state should clearly understand the risks taken by the plan and the fiscal impact they could have on their livelihood.

The commission’s recommendations offer constructive ideas to advance the fiscal health of the Pennsylvania’s two largest pension plans, which could, consequently, relieve the pressure of pension debt payments for taxpayers. To their credit, both plans have already made significant policy changes that will push them toward solvency. For instance, in 2017 introduced a hybrid retirement benefit structure for new hires in both systems that takes effect this year. However, this change only affects benefits going forward. In order to decrease the accumulated pension debt and prevent it from growing further, the two major Pennsylvania plans need significant improvements to funding policy, such as a shortened amortization schedule and a lower assumed rate of return.

According to the report, “The state has, and wishes to maintain, a commitment to providing fair and secure retirement benefits to those whose careers have been dedicated to public service.” The commission’s recommendations show that more fiscal stability can be achieved in a way that keeps these promises to those who have and continue to serve the commonwealth.