Friday, Senate Democrats used this process to approve a concurrent resolution that calls for a $3.8 trillion federal deficit this fiscal year followed by a $1.5 trillion deficit in 2022. Committees in the House and Senate still need to draft the actual coronavirus stimulus legislation but the resolution, which also includes 10 years of projected federal budget data, forecasts the national debt reaching a total of $41 trillion in the 2030 fiscal year. The national debt is currently over $27 trillion.

It is possible to compute projected debt-to-gross domestic product (GDP) ratios by dividing the publicly held debt projections from the Senate resolution by the Congressional Budget Office’s new GDP forecasts, which were released on Feb. 1.

The results of such a comparison are worrying. As shown in Figure 1, by the end of the current fiscal year, publicly-held debt as a percentage of GDP is forecast to eclipse its previous peak of 106 percent reached just after World War II. The ratio continues to rise gradually through 2030 when it is expected to reach 115 percent.

Figure 1: Federal Debt Held by the Public As a Percent of GDP 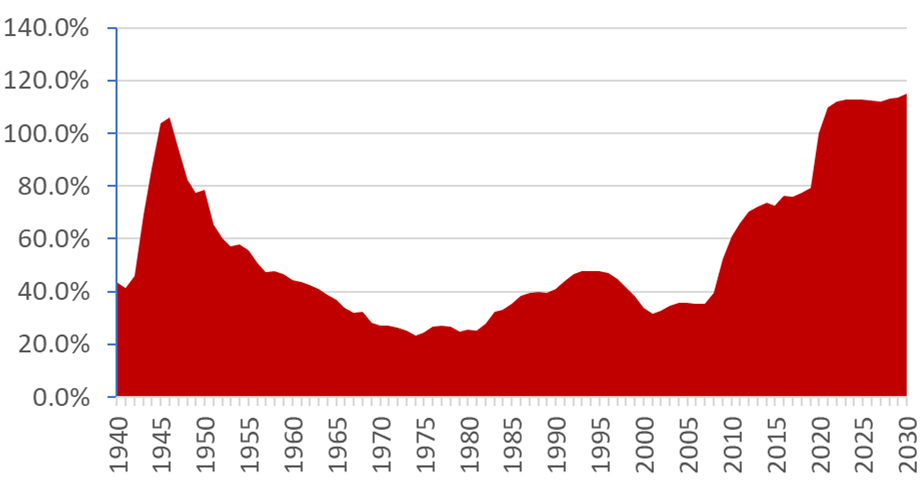 As the chart shows, there was a large uptick in recent years, with President Donald Trump adding nearly $8 trillion to it during his four-year presidency.  And these projections for future budgets through the 2030 fiscal year could be underestimating the debt, as the report assumes the federal government will make an unlikely return to budgets with sub-trillion-dollar deficits in 2024, 2026, and 2027.

The debt forecast also does not include the impact of potential new spending, like the infrastructure package President Biden has called for, which Congress may attempt to pass through a second budget reconciliation.

While debt-to-GDP ratios in excess of 100 percent may be manageable in an environment with low interest rates, if interest rates spike upward then debt service costs could quickly crowd out other federal spending and economic activity. In the most extreme cases, spiraling debt could eventually help cause a sovereign debt crisis like those seen in Argentina and Greece in recent years.