As Reason Foundation’s Pension Integrity Project has discussed previously, this consolidation is a good idea, but much more dramatic changes will be needed to extricate the state from its pension funding crisis.

On the positive side, the consolidation should spur more efficient management of the many small pension funds operated by downstate Illinois cities, some of which are managing less than $10 million in assets. The goal is for the new Police Officers’ Pension Investment Fund and Firefighters’ Pension Investment Fund created by this law to be capable of mimicking the superior investment return performance that has been turned in by the Illinois Municipal Retirement Fund, which serves non-uniformed local government employees.

But SB 1300 will have an ambiguous impact on unfunded pension liabilities. While it is likely to increase investment returns on assets, the financial impact could be offset by benefit enhancements for employees in Tier 2 of the system, which includes all workers hired in 2011 or later. While some of these enhancements may be good policy because they may enable cities to avoid unanticipated bills from the Internal Revenue Service (IRS), we have not seen an actuarial analysis of these benefit changes.

Further, downstate public safety employment plans accounted for only a small portion of 2016 Illinois unfunded pension liabilities as shown in the accompanying table, which is derived from the report from Pension Consolidation Feasibility Taskforce provided to the governor. 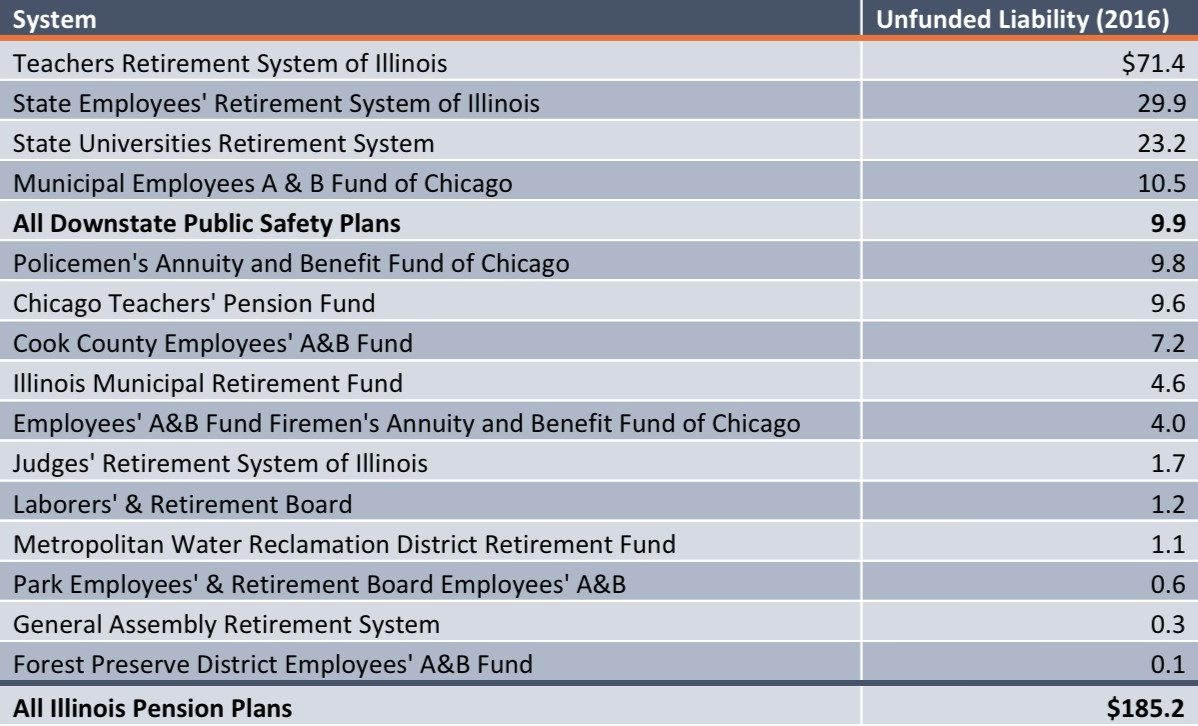 As a result, the bipartisan reform adopted by the legislature, and expected to be signed by the governor, merely scratches the surface of a public pension problem that threatens public employees, taxpayers and government creditors.

At most, Illinois’ consolidation could slow the growth of unfunded liabilities for local pension plans but this alone would not be enough to set Illinois pensions back on track to fiscal solvency.

In 2020 and beyond, the Illinois legislature will need to continue to pursue more ambitious bipartisan reforms that take significant steps to close the funding gap and fix the structural issues that created the current challenges for the state.  Such steps could include adjusting employer and employee contributions, offering more sustainable retirement benefits to new hires, adopting more realistic actuarial assumptions and transferring government assets to state and local pension systems — as states like Arizona, California, Colorado, Michigan, and others have done as they’ve made pension reforms in recent years.