The 2020 election is scheduled for Tuesday, Nov. 3, 2020. Given the highly polarized and tribal political environment we are in, imagine if the 2020 presidential ballot looked like this: 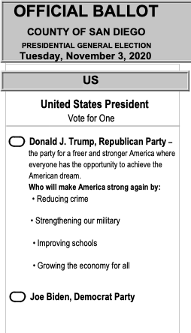 From the bullet points making unsubstantiated claims about what the Republican Party would do to the usage of “Democrat Party” that Republicans like to use (rather than Democratic Party), I think most Republicans, independents, and Democrats should be able to agree this would be a highly prejudicial presentation of the two major-party presidential candidates.  In fact, many people might say such obvious bias in the ballot language would significantly and unfairly impact the results, raising questions about the election results since the two options are not presented impartially.

Yet, for the last couple of decades, elections across the state of California have had this exact deficiency—with ballot summaries increasingly turning into timeshare-style sales brochures for ballot initiatives. The ballot language often ticks off a long list of supposed benefits while ignoring most potential downsides. Critics would suggest the ballot language typically hides crucial financial considerations by leaving them out or employing incomprehensible descriptions (like saying 3 cents per $100 of the appraised value of a property, which few voters will take the time to decipher).

The mockup of the biased presidential ballot image above I created by copying from the last election where a nearly identical layout was used for a massive $3.5 billion San Diego school bond. Here’s what that ballot actually looked like: 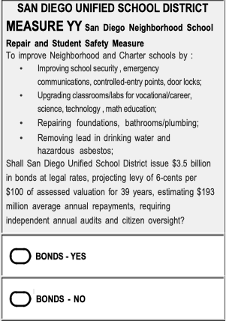 Proponents of the bonds would argue that the language includes the price tag of the bonds and outlines what the money is supposed to be spent on. Others see bias and might assume there are laws prohibiting bias and requiring objectivity on the ballot. Unfortunately, until 2017 there was no such law in California for local measures (city and county). That changed with the passage of Elections Code 13119 in 2017, which requires an impartial synopsis “in language that is neither argumentative nor likely to create prejudice for or against the measure.”

Re-examining the Measure YY ballot statement reveals it is strewn with marketing statements and other seeming illegalities. 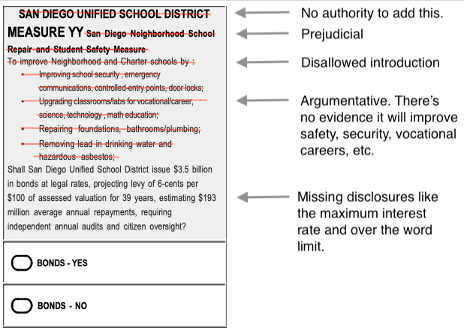 The 2017 law is clear on exactly what should be allowed on ballots. I took the time to rewrite Measure YY’s ballot removing the prejudicial language, adding missing requirements (like the maximum interest rate), and conforming it to other legal restrictions like the word count. Here is what it would have looked like: 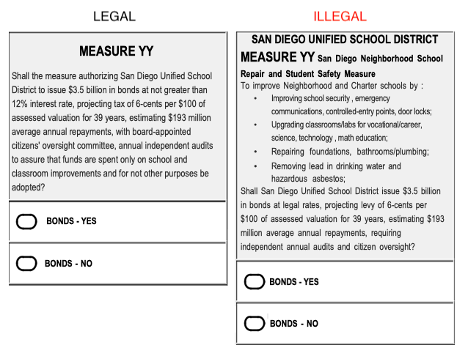 A side-by-side comparison with what should have been on the ballot in 2018 and what was on the ballot reveals a striking difference. The original and seemingly illegal ballot statement is attempting to persuade people to vote ‘yes’ by promoting the benefits of the measure. It starts by inserting a prejudicial title and continues with a description loaded with argumentative words such as neighborhood, safety, security, science, upgrade, improve, vocational, and moves on to exploit people’s fears of hazardous asbestos, school shooters, and lead in drinking water.

It’s a master class in manipulation of people’s views and emotions, using carefully crafted words and leaving out required items that might dissuade some from voting yes, like the maximum interest rate. Billions of taxpayers’ dollars are on the line, which creates enormous financial incentives for school districts and others to steer voters toward approval of the spending.

Unfortunately, many government officials in charge of keeping ballots honest don’t seem to be following the law. Every county in California has a registrar whose job it is to keep elections legal and fair. They are very strict with political candidates, but with local initiatives, they are lax.

Local authorities know this and are exploiting it to their benefit. One would like to give the benefit of the doubt to the registrars. Perhaps, despite it being their jobs, some are oblivious to this relatively new law one might argue. But the evidence suggests they are not only aware but even complicit in the language that ends up on ballots since the local authorities are paying them for each initiative they put on the ballot.

Before the last election, I sent a letter of concern to San Diego County Registrar Michael Vu as well as a copy to every registrar in California. Unfortunately, Vu never responded to my letter. In the subsequent election, he took even greater liberties than has ever happened before with any school bond that I’m aware of.

With Measure YY, Vu stunningly added bullet points of all the alleged positive benefits to the ballot statement (as the original image shows). There may or may not be benefits to that school bond, but they do not belong not in the summary section. They should be in the argument section of the ballot where people can get informed by reading the arguments for and against each measure on the ballot.

I decided to file a lawsuit to ask the courts to set aside the election in my district due to the gross and deliberate illegalities I saw in Measure YY and another similar measure. An appeal, in that case, was recently filed with the 4th Circuit Court of Appeals. You can read more about the arguments I’m making here. If you contrast the two ballot statements above then you’ll appreciate what the case is about—fair elections.

If the registrars will not enforce the law, one might expect the state’s attorney general to step in. However, California Attorney General Xavier Becerra is currently accused of the same type of malfeasance with two state initiatives. The Howard Jarvis Association recently filed a lawsuit alleging “material deception” in ballot materials for two statewide initiatives on the November 2020 ballot.  One ballot measure would exclude commercial properties from California’s Prop. 13 tax limits and the other would legalize gig workers as a classification.

Lately, the national debate over the mechanics of the upcoming election has centered almost entirely around provisions for mail-in ballots during the coronavirus pandemic. But before collecting and tabulating votes, there must be an honest ballot to gauge people’s votes. My hope is that county registrars throughout California follow the law and their legal obligation to ensure all ballot statements are impartial. They need to stop allowing the ballot to be used as a marketing tool by local authorities pursuing higher taxes and more borrowing.

Simply abiding by all the legal requirements already on the books would help ensure we have honest and fair elections with results that reflect the will of the people.

Michael Robertson is a technology entrepreneur who founded the digital music company MP3.com.