The pension plan that provides retirement benefits to over one million Florida teachers and state and local government workers has over $36 billion in public pension debt. If nothing is done to address this debt and the pension system’s rising costs, Florida will struggle to deliver the pension benefits that workers are counting on and taxpayer funds will be diverted away from other priorities like education and infrastructure.

And Florida’s pension problem is rapidly getting worse. In just the last two years, the Florida Retirement System (FRS) has added $6 billion in unfunded liabilities.

The reasons for this drastic shift are simple: the FRS pension fund was hammered by the financial crisis of 2008 and it never really recovered. Increases in market volatility and an overall decline in investment returns have hurt the system’s ability to grow its assets. This problem was further exacerbated by several years of inadequate plan contributions on behalf of the state. And economic experts expect institutional investment returns to be depressed even after the U.S. economy recovers from the COVID-19 crisis. In short, the problem isn’t going to get better on its own.

The Growth of FRS Pension Debt 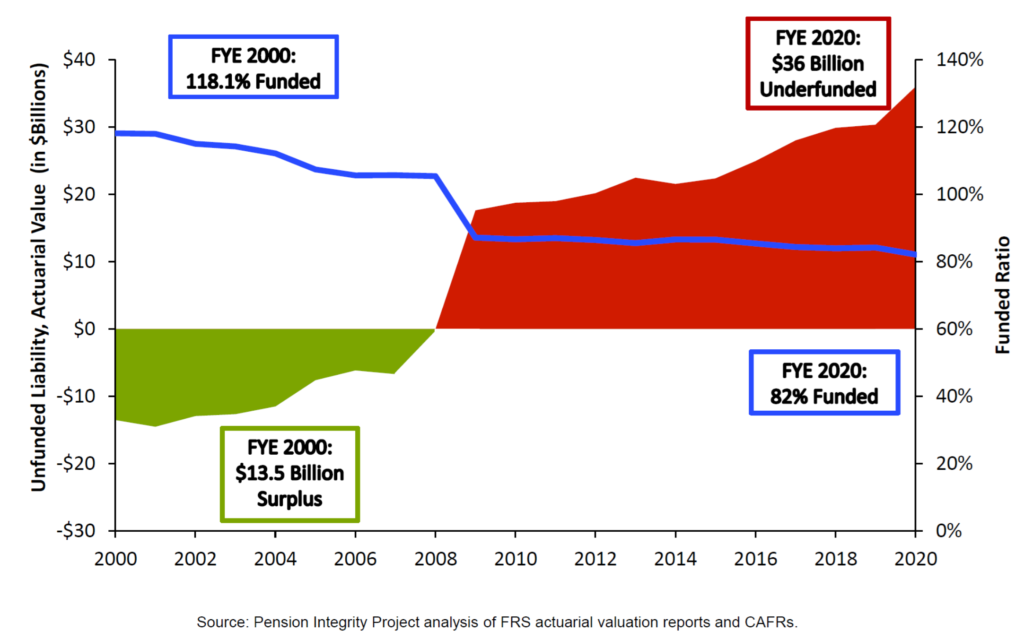 FRS pension plan managers and state lawmakers have made noteworthy steps to try to improve the stability of FRS by adopting more conservative investment assumptions in recent years, but more action is desperately needed.

Once earned, pension benefits are legally guaranteed by the state, and they must be paid no matter what. Simply put, this debt cannot be swept under the rug by state lawmakers, it must be paid one way or another.

As FRS funding continues to decline, the state will be forced to increase the amount they are putting towards the pension plan each year. This could result in increased taxes or requirements that public employees put more of their paycheck towards paying off pension debt. Furthermore, this debt could cause the state to face a credit rating downgrade, which raises the cost of issuing bonds that are used for things like transportation investments.

And pension debt is particularly bad news for state spending areas like education and transportation as the likelihood of pay raises for teachers or more road repairs decline as pension debt takes up a larger portion of the state budget.

The long-term cost of inaction is too expensive to ignore. Florida’s ability to strike a balance between a low tax environment and quality public services has turned it into an attractive state for both young workers and older retirees. To preserve such a reputation, policymakers need to recognize and act to correct the state’s growing pension problem.

Florida’s public servants, their families and the state’s taxpayers are depending on the Legislature to get this right.

A version of this column previously appeared in the Orlando Sentinel.