The union representing California State Highway Patrol officers has agreed to defer a portion of member wage increases to help pay down unfunded pension liabilities. While the concession is largely symbolic, it nonetheless sets an important precedent: a California public employee union displayed a willingness to help the state address its pension funding gap.

The California Association of Highway Patrolmen (CAHP) is best positioned to set this precedent because its members face especially large unfunded pension liabilities. Patrol officers belong to CalPERS, which reported an overall funded ratio of 70 percent in 2017. But CalPERS assets and liabilities are divided into separate plans for the various employers and employee types it serves. The California Highway Patrol (CHP) plan was only 60 percent funded in 2017, which places the plan not just well below the system average but below all other CalPERS state plans. Unfunded liabilities total $4.9 billion for the plan. 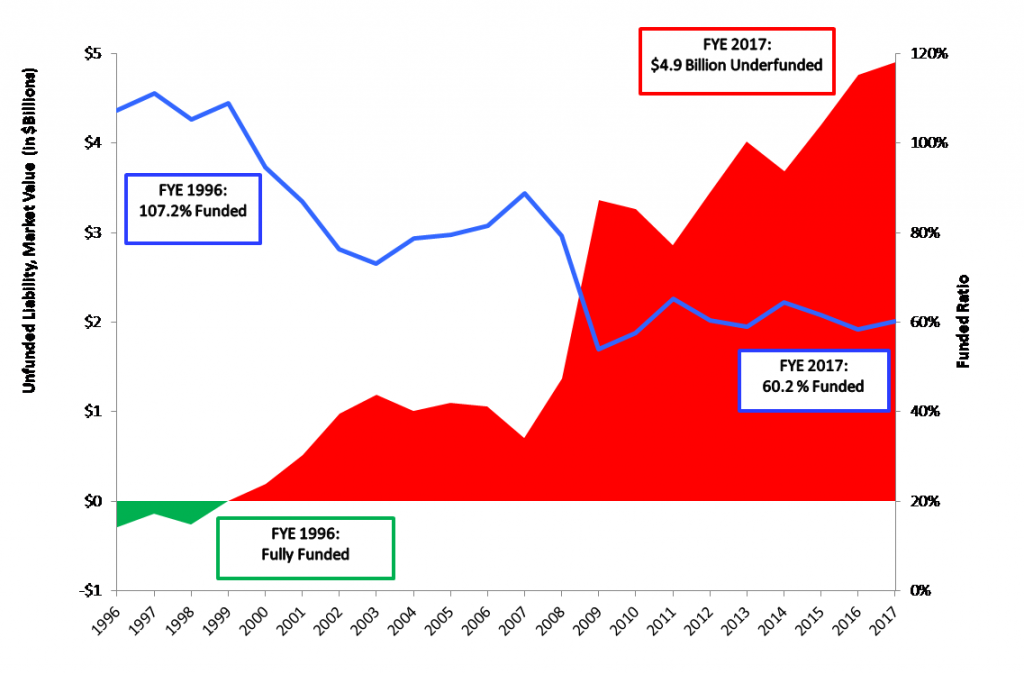 As the accompanying chart shows, the CHP plan was fully funded in the late 1990s. But its funded ratio dropped sharply at the turn of the current century due to a bear market and the impact of Senate Bill 400 (1999), which enhanced employee pension formulas. For CHP officers, SB 400 increased pension payouts from 2 percent of the worker’s final salary times their number of years employed to 3 percent of their final salary times their number of years employed. Unfortunately, this 50 percent increase in pension benefits was not offset by additional funding, thus impairing the plan’s solvency.

With California currently enjoying large budget surpluses, it has wisely been making extra contributions to its pension plans. Now, patrol officers will also pitch in, albeit in a modest way.

According to the California Legislative Analyst’s Office, officers would have received a 3.5 percent increase in 2019, so 0.5 percent of payroll will be diverted to the pension fund. That 0.5 percent reduction will also translate into lower final average salaries for employees who are about to retire, slightly reducing their annual pension benefits from what they would have been in the absence of the diversion.

While this appears to be a substantial concession, it is only temporary. At the end of the contract in 2023, officers will again receive the salary increases in their entirety—ending the extra pension contributions and the reduction in benefits for newly retired officers. On the other hand, it is possible that the next MOU could extend the deferral arrangement, especially if the CalPERS Highway Patrol plan remains deeply underfunded.

Aside from emphasizing the temporary nature of the concession, the Legislative Analyst’s Office (LAO) also criticized the use of an average of local police salaries to calculate CHP pay levels, citing a 2007 LAO report that said “formulas make the Legislature’s job more difficult because they provide significant pay raises that are beyond the state’s control.”

The contract also requires the state to share—albeit unevenly—in the effort by making additional contributions to the CalPERS Highway Patrol Fund. Extra funds totaling $100 million will be diverted to the pension system from the state’s Motor Vehicles Account and another $243 million be diverted from the state’s General Fund. These additional employer contributions dwarf the $3 million that officers are expected to kick in through salary increase deferrals. Though it is fair to note that given the state’s strong revenue position in 2019, the conditions may not have been ripe for a more balanced approach to the contribution increases.

That said, the MOU represents an important precedent for shared responsibility.  CAHP recognized that underfunding represents a risk to its members’ retirement security and has taken the first step toward reducing this funding gap. Hopefully, this will set an example for other public employee unions in California and beyond.